Here is a shot of a D&H train pulled by RS36 #5016 passing under the Route 9W bridge on the old Albany Main line. As I noted here, the line was torn up in 2000 after one of the railroad bridges near where this shot was taken was condemned. The cost of the repair wasn't deemed worthwhile and thus the line was severed. It is a nice walking trail, and I hope someday to bike along it. Until then, I will only have shots like this from October 24, 1983. 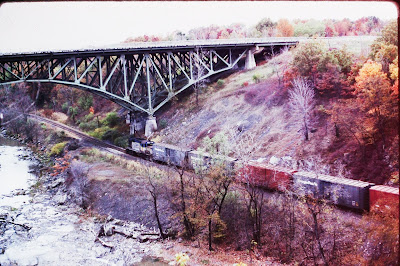 Posted by DandHColonieMain at 12:03 PM