Sperry hi-rail truck down the street

My wife and I were recently driving to the supermarket and passed a hotel about a quarter-mile down the road from our house. Imagine my surprise when I saw this parked in the lot. I have seen Sperry railcars, which are used for testing track, but I haven't ever seen a hi-rail truck before. 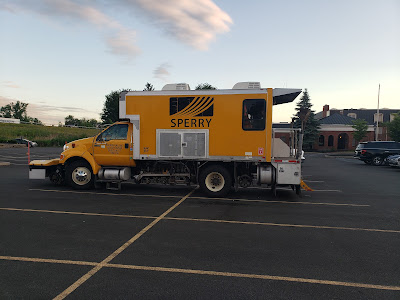 My wife said to go back and take pictures, but I wanted to get to the supermarket first (it was a family trip, after all). On the way back, though, I swung by and took these shots. The sun was setting, but I still got a couple. 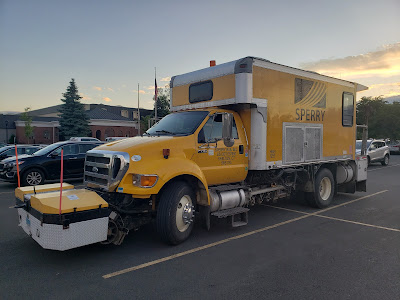 The huge extension from the front of the chassis was really unusual looking, and I don't know what was inside of it. It reminded me of a large beverage cooler. 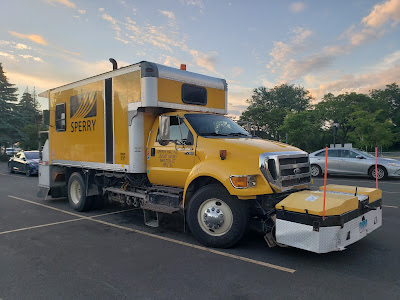 The rear had a porch area, which I didn't climb on. 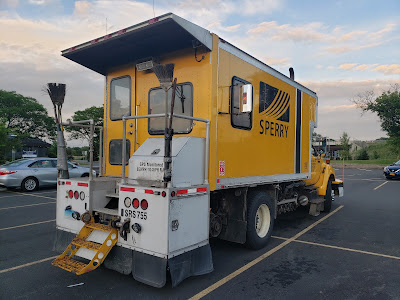 I looked inside the windows but didn't think I could get any suitable pictures so nothing much to report there. 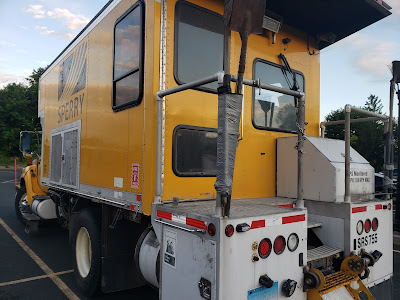 The driver's side had a lot of valve and such, none of which I could figure out. 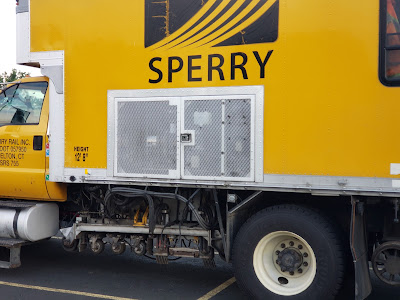 All in all, though, it was a neat discovery. It's track and tie season, so it could have been working anywhere in the area. There is a budget hotel around the corner from this one and I frequently see CSX vehicles parked there. But this was an upscale hotel, so Sperry must have had money to spend.

Here is a link to a completely different Herzog track machine I saw in 2012.

This is a shot of a Department of Transportation (Federal? NYS? Mass?) test train taken in Lawrence, MA, on June 26, 1984. New York State did various inspections of the Colonie Main line before offering Guilford state grant funds, and it is likely that the same situation existed in MA. 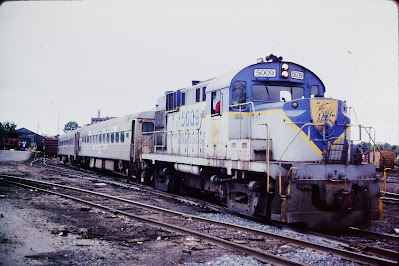 For a look at another DOT test train from 1980, see this previous post.

Posted by DandHColonieMain at 5:11 AM No comments:

Here is a hazy summertime shot showing Maine Central #286 (formerly D&H) and D&H #5019 waiting in an unknown railyard, possibly Oneonta. The D&H train appears to be a local as it has a caboose on it (though it is directly behind the engine). 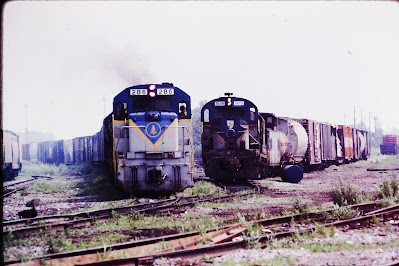 Posted by DandHColonieMain at 4:44 AM No comments:

I took a weekday off to take care of some personal things, and realized I had a couple of hours in the early afternoon free. There are times when we are sitting in our backyard and can hear Amtrak trains blowing for the Morris Road crossing on the "high-speed" line between the Albany/Rensselaer and Schenectady stations. Despite being about six miles away, it is easy to hear. Originally the line was four tracks, but it was later cut down to one. In 2016, New York State funded adding a second track as part of its "high speed train" initiative. 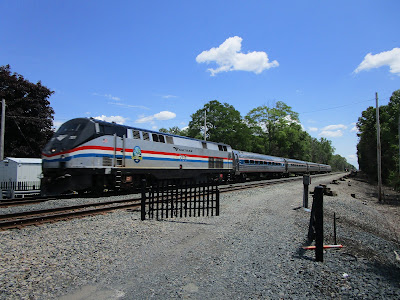 Since the line is only mostly used for passenger trains, (usually only 4 trains each way per day), railfanning by the crossing would mean mostly just sitting around getting sunburned. But today I realized I could look up the Amtrak schedules online and determine about when they were due to cross the road. I then noticed that two trains, one EB and the other WB, passed the crossing within an hour of each other. That would be worth spending my my lunch time waiting.

My wife offered to come along with Harrison, so away we went. I checked the schedules again right before leaving and noticed that all of the EB trains were marked as "delayed". I didn't know why, but the website had revised train times so I adjusted my schedule.

When we arrived I found out why there were delays. One of the tracks was out-of-service for maintenance work, and we could see in the distance at least a half-dozen various track repair vehicles. There were also several construction trucks parked on the side of the road by the crossing. 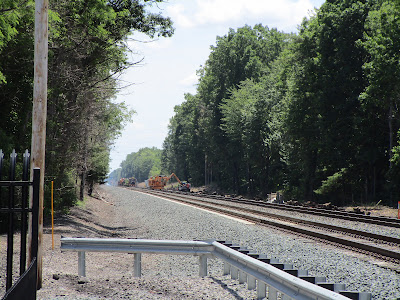 Around the time the first train was due, three MOW vehicles rolled down the track to the other side of the crossing and parked. I assume that the workers wanted to be by their trucks for their lunch break instead of way down the track.

The first train was eastbound and its speed surprised me. It was hauling, which I think is around 70mph. It was also very quiet in its approach, and I can understand why people who aren't paying attention can have these trains sneak up on them. 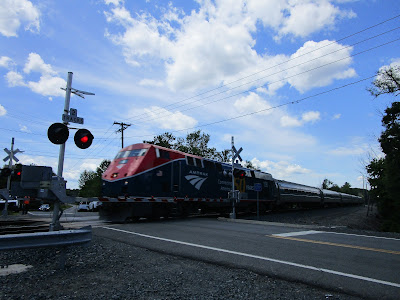 The next train was a westbound train and it wasn't going as fast. I had crossed the tracks for a better picture angle, and as I walked to my car over the crossing a woman driving by yelled out the window "Wow, that was really flying!" Another view of the train is the lead off photo of this blog post. 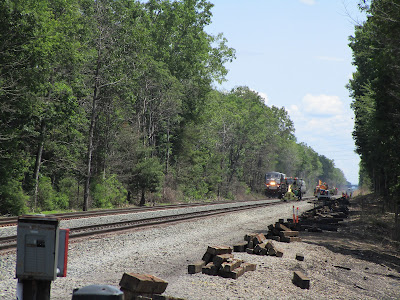 As before, Harrison really didn't watch the trains but at least he didn't cry. After trainspotting, we drove to a nearby park and walked with our dog and played on a picnic blanket with Harrison. During that time, a third passenger train passed the park on the same track.

All in all, it was a pretty good afternoon.

Steamtown National Historic Site is a national park dedicated to the role that steam locomotives played in the American industrial revolution. It started off as a collection of railroad equipment owned by F. Nelson Blount, who in 1964 established the Steamtown Foundation to operate Steamtown USA in Bellows Falls, Vermont. By 1984, the venture couldn't financially sustain itself and it closed.

Part of the collection of steam engines stored in Vermont were moved to Scranton in 1986, via the Delaware and Hudson. Here is a shot from June 1986 taken in Oneonta showing a freight train passing by some of the engines destined for Steamtown. The steamers are separated by gondolas, probably to spread out the weight of the train. Also, the first car of the freight train looks like a high-wide load (possibly from Schenectady's General Electric Plant?). 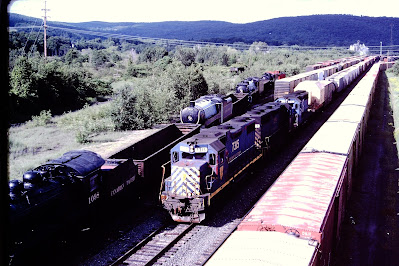 Who knew that 35+ years later Blount's collection would live on (and sadly, neither the D&H nor Guilford as railroads would)? Here are some pictures from when I visited Steamtown N.H.S. in 2019.

Posted by DandHColonieMain at 5:24 AM No comments:

This is a poorly exposed shot. I get it. It isn't mine. But it reminds me of the times when I was a young railfan and would sit and watch trains until it got dark. In the last hour the long shadows would lead to lousy pictures that never came out well. They were just like this one. However, they still hold good memories for me. 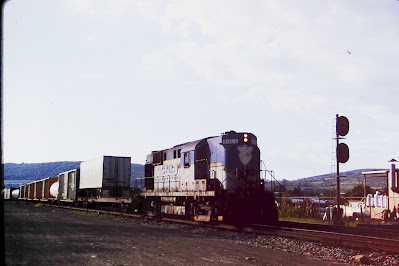 I love the D&H high-nose Alco RS11s, and each one was painted different. I think this shot dated June 1986 of engine #5005 was taken in Binghamton.

Posted by DandHColonieMain at 6:55 AM No comments:

Taken in June 1975 at what I assume is Amtrak's facility in Rensselaer, NY. 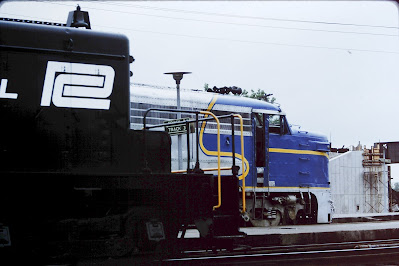 Posted by DandHColonieMain at 5:19 AM 2 comments:

As of midnight on June 01, 2022, Pan Am Railways ceased to exist. It was purchased by CSX in 2020, though it took several years of approvals and regulatory processes before it became official. I always wanted to railfan Pan Am between Albany and East Deerfield, but never made it. Now, the best I can do is to photograph CSX along that line. CSX took out Conrail (well, with Norfolk Southern's help) and they took out Pan Am. For all practical purposes, I wasn't modeling any part of the line that belonged to Pan Am. But it still hurts. I really hate CSX! 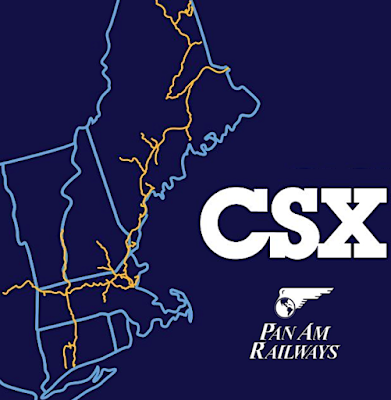 Here is a shot I took of a Pan Am train in Rotterdam on May 15, 2021, at the western-most portion of their railroad. It looks like CSX was already starting to take over their locomotives. 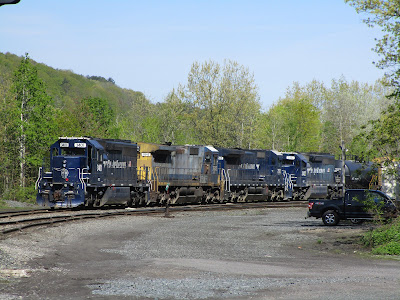 Posted by DandHColonieMain at 5:10 PM No comments: