I'm a Beatles nut through and through. I stand on solid ground when proclaiming that they are the best rock band ever (don't throw Stones on my blog, people). Whether it was the catchy tunes, the cool guitars (second confession: I am a die-hard Rickenbacker aficionado), the snazzy suits and haircuts, or the new sonic territories pursued through their albums, they were are still are simply the best. In comparing American music at the time to theirs, once can see the parallelisms and the differences. Both sides of the pond were trying to do the same thing but getting there differently. 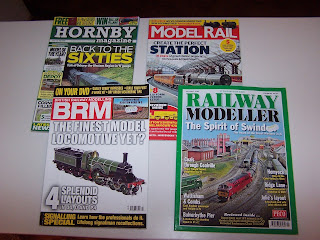 But, Fab music isn't the only thing I am crazy about. I am a sucker for anything British railway related. Standard gauge, narrow gauge, steam, diesel... it doesn't matter. I just love them all. A friend of mine has several layouts in his house, and two of them are European and British Railway themed. He subscribes to several different British railway modeling magazines, and once he is done with them gives them away. I used to see them on the "free stuff" at our NMRA meetings and finally figured that it would be easier to deal directly with him. So, now I pay for one of the subscriptions and get to keep all of the magazines when he is done reading them. Here are the "Fab Four" that I regularly read. By the way, I think Railway Modeller has the best content, production value, and insightful reviews.

Let me tell you, my paper collection has exploded with lots of new reading material. And, these magazines are really thick. Sort of like the older Model Railroader magazines used to be. For all the people that complained MR had too many advertisements, I enjoyed them just the same. And now, the British magazine's advertisements are for really cool things. So, the more the merrier. Apparently British modelers need to see monthly adverts instead of just going to the manufacturers' websites.

I have noticed several themes from reading the British magazines. First, their layouts are small. Tiny in fact. Most would be better characterized as dioramas than layouts. Space is at a premium so their layouts are usually just small portions of scenes like stations or yards with fiddle or staging facilities at one or more ends. Second, they cram a lot of track into them. While they might be prototypical, they sure look busy with switches and sidings running hither and yon. Third, when they do have room for a circular or loop arrangement, they model multiple main lines. Again, possibly prototypical but it also lets them run several trains round and round.

Fourth, apparently they have solved electrical pick-up issues because they love to run small switch engines over switches with nary a concern for stalling on the frogs. I don't know how they do it! Fifth, their overall modeling is very evocative and I think better in many ways than American modeling. They better grasp weathering, colors, overall scene composition, and backdrops which contribute to more convincing scenes. Lighting is also a big part, but that could be because of the many layouts that go on the exhibition circuit. Finally, they change layout ideas quickly. Because of the smaller footprint, they finish their layouts much quicker then we do with our monster basement railroads, and then they move on to something else.

Note to self for 2020: the Great British Train Show exhibition is held in Toronto on the even numbered years usually at the end of April. I didn't hear about this until it was too late. I must remember it for the future, as it sounds really good... yeah, yeah, yeah!
Posted by DandHColonieMain at 9:12 AM 1 comment:

I recently discovered a Blog by Bernard Hellen that has some interesting articles, including this post about weathering steel structures using salt, rubber cement, or hair spray. Now, I had heard of the first two before but certainly not the third. Hair Spray? Oh, I'm a big hair 1980's music nut so I fully believe in the wonderful transformative powers of hair spray. But for modeling rust? Common... 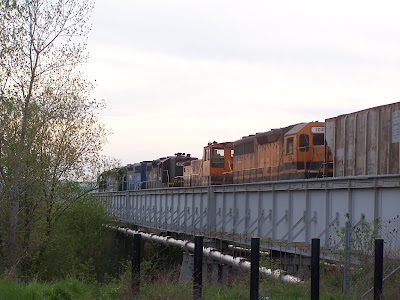 It looks so cool that I am looking for a project in my basement to try it out on. And, I am posting it now on my blog because I am sure down the road when I find such a project I won't remember who to attribute proper credit to. Oh well, I suggest you check out the post yourself and see. It is fantastic. The entire blog looks interesting, and he is modeling an interesting operation- the Quebec and Gatineau Railroad, which is part of the Genesee and Wyoming Railroad's family of short lines. Being from Western NY, I am very familiar with the original G&W. Not the picture at right taken in May 2007... there are various engines (a switcher, an old Geep) and paint schemes (blue patch out, black patch out) in addition to the traditional orange and black. This is in Mt. Morris on their daily salt train run.
Posted by DandHColonieMain at 4:26 AM No comments:

Frog Juicer to the Rescue!

My yard lead consists of three switches that were installed together. Had I used M.E. switches with isolated frogs or switches with insulated frogs, I wouldn't have had problems. But, I didn't because I was fed up with M.E.'s quality contraol. Diagnosing the problem took a while but the cure was easy. First, I marked each place I had a feeder with a red or black bead, and blocked off all other track that was isolated from the switches.

I needed to cut gaps in only four places. For two of them, I merely unsoldered the rail joiners connecting the adjoining rails and slid them along onto only one rail. Then, thin styrene was glued between them to maintain the gap. For the other two, I didn't want to use a Dremel for fear of messing things up. So, I removed the rail joiners completely and carefully slid out the rail from the molded frog and pulled it parallel to the rail it joined. The rail was nipped just a little shorter and it was slipped back into the molded frog. 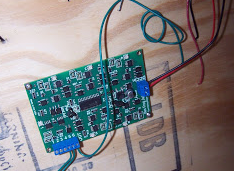 Then, three additional green wires were soldered to the rails in the crotch of the frog and dropped (thankfully just barely clearly a benchwork cross brace) and hooked up to the Tam Valley Depot frog juicer. The one I purchased has the capacity to power six frogs or reversing loops, which is more than I needed. But, having excess capacity is better than having insufficient capacity. After only about 20 minutes more of work, everything was running smoothly (I tested it all this time) and I was back in business! 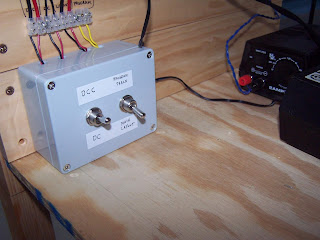 I also got sick and tired of switching out the DCC and DC throttle systems input leads to power the layout. Sometimes I want to run DC trains, sometimes I want to run DCC. So, I built a little gray "magic box" that at the flip of a switch can change the input power source. The output can also be switched from the layout itself to a programming track (useful for testing engines), which I have yet to hook up. It was mainly a bit of cutting, stripping, bending, and connecting various wires together. The box is screwed to the board behind it so it won't shift around.

Now the wiring is officially done!
Posted by DandHColonieMain at 6:08 AM No comments:

Short circuits in the Staging Yard!

Just when you think you are out, something drags you back in!

I was pretty confident that I had finished up the wiring for my layout. I had run some test trains around the mainline and into all of the sidings, and even checked the turntable and the stalls, but I never actually tested the staging yard. What was there to worry about? I mean, I wasn't powering the switch frogs and between the three switches I had three sets of feeder wires. What could go wrong? Apparently, a lot.

I had originally designed the layout for M.E. switches, which have insulated metal frogs. The rails that come from the frog are gaped from the frog and internal jumpers power them, so no rail gaps after their switches are necessary. I noticed the same thing with the Shinohara curved switch. For the replacement Peco electrofrog switch I installed on the mainline, I gaped the rails away from the frog and powered the frog through the Tortoise switch machine's contacts. Again, simple enough.

But, for the staging yard I intended to purchase Peco insulfrog switches and mistakenly bought electrofrog ones. They are better in the sense that they allow the frogs to be powered, but that benefit comes with a cost: you need a toggle switch to control the polarity of the track switch. I wanted to go the cheap route and use Caboose Industries ground throws, and hope the trains didn't stall on the frogs. I was also hoping to avoid using a Tam Valley Frog Juicer because they only work with DCC trains, and I might want to run DC trains in my staging yard. Unfortunately, something has to give.

If I had just ordered M.E. switches I would have been fine. But, I now question their reliability and am avoiding them (though their flextrack is still excellent).

I am now in the position where I must: (1) purchase three new Peco insulfrog switches; (2) purchase a Frog Juicer and cut gaps in the rails and install feeders, or (3) remove the switches, drill holes, and install my remaining Tortoise machines. Since this section is a "temporary" one I don't want to go with option 3. The other two were about the same cost so I ordered a Frog Juicer online.

Unfortunately, it means that DC powered engines will not be able to go into the staging yard. Since I plan to focus on DCC anyway, I don't think that will be a big deal. If it is, I can always remove the Frog Juicer and instead use slide switches or toggle switches to control the frog polarity.
Posted by DandHColonieMain at 10:20 AM No comments: