The L-girder benchwork is finished 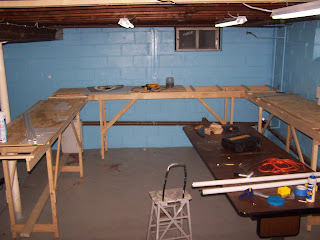 After another weekend of sawing, drilling, gluing and screwing together, the "bottom" portion of the benchwork... the L-girders and leg assemblies... is finished on three sides. I cannot build the fourth side until I decide what I want to do for the access gate. Plus, if I finish the fourth side I will need to remove that rolling table serving as my workbench and I will need it for the putting together the open-frame boxes that will be my LDE areas. So, I am at a good stopping point.

As can be seen from the pictures, I arranged the cross girders on their sides. That is because they are really only there to tie the L-girders together at the top, and also provide a smooth supporting surface for the boxes. I won't be using them to support track risers or anything. As luck would have it, I was 4' (or two cross girders) short when I bought the wood so I had to go to the store again for another stick of wood. They are screws but not glued to the L-girders, as I might need to adjust them to allow for access to the undersides of the layout. Also, they do serve a purpose in making sure the L-girders are spaced exactly 22" apart (outer flange to outer flange). While having them parallel isn't critical to L-girder benchwork, it is critical in fitting in the layout in the space I have. As it is, it fits with about 2" to spare. Stupid ceiling support pole. 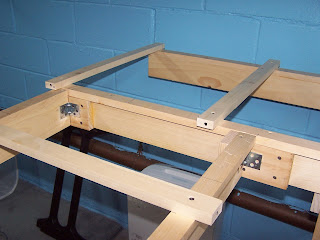 I also joined the two side structures to the one in the rear with steel corner brackets. To reinforce the wood where the brackets are, I glued and screwed extra 1x4 lumber scraps. It might be overkill, but since I may need to move the layout around a little all by myself it has to be strong. Once it was all joined together, I adjusted the bolts on the bottom of the legs to ensure that everything was at least touching the floor. I won't level everything until LDE's are on it, but for now it is close.

Coming into this weekend, I had spent $300 on the benchwork. All of the diagonal cross braces for the legs, as well as their support gussets, and the cross girders on the top of the L-girders, totaled another $60. So, $360 total. I am pretty content where I am with the layout right now.


Posted by DandHColonieMain at 4:46 PM No comments: 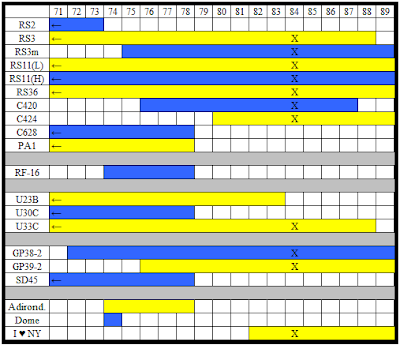 D&H's roster in 1984 was diverse. The variety of locomotive makers (Alco, GE, EMD) and paint schemes really interested me. Some railroads (ex: Union Pacific, Conrail) have had a mind-numbing assortment of engines, but they were pretty much all painted the same way. Boring! The D&H wasn't like that at all, though it took a bit of research to find out just how diverse they were. I first started with the D&H's historical group, the Bridge Line Historical Society, whose webpage had some information and pictures about their all-time roster. This allowed me to make the spreadsheet above. The year is along the top, and the type of engine is on the left. I sorted the RS-11s by nose height (high and low).

I also added a couple of other things that appealed to me (when the Adirondack passenger train ran, the one-week period when the D&H repainted an Amtrak dome, and the "I love NY" boxcars). While I am happy with my decision, I do miss the U23B class, especially the "Gray Ghost" #2311. However, I can still add that as a Maine Central patch paint job. To further narrow down what was on the roster in 1984, I relied heavily on the book Bridge Line Blues by Hal Reiser. This excellent resource had a section on motive power from the late 1970s to the early 1980s which gave specific road numbers and paint scheme histories. With this information, I started making charts by type (RS3, GP39-2, etc.) listing each road number that was supposedly around in 1984. Next, I went online to the Railroad Picture Archives  (RRPA - D&H engine page) and hunted down pictures of these engines. I also scoured Ebay for relevant slides. Those pictures were also helpful for determining how to weather the engines as they looked in 1984. A couple of things immediately jumped out at me.

First, though the D&H had 9 types of locomotives in 1984 all but three were Alco, and usually a class size was a dozen or less. Surprisingly, through attrition and rebuilding into RS3m engines the large class of RS3s had been whittled down to just four by May of 1984. 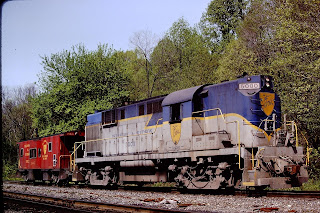 Second, the diversity of paint schemes was astounding. The classic "Lightning Stripe" scheme was modified by the N&W in the early 1960s when they controlled the D&H through their holding company "Dereco." N&W insisted that road numbers be painted on the sides of the engines, but this was not done consistently. In 1977 in an austerity move the D&H went to solid blue scheme nicknamed "Blue Dip" or "Altschul Blue" (referring to D&H president Selig Altschul who served briefly in 1977). There were variants such as the color of the nose, frame trim, truck colors, and even one engine had script lettering. In 1979 to spruce it up yellow chevrons were added on the ends, creating the "zebra stripe" scheme.

Then, the side numbers were enlarged with the lightning stripe repaints at Colonie beginning with the 5012 on 3/15/1981. Units which were still in blue and grey paint were usually re-stenciled in this fashion by patch painting out the original lettering and applying the new standard numbering over the top. Unfortunately, this weathered poorly and peeled or washed off revealing the older lettering.

Third, by 1984 many of the Alcos were on borrowed time. The influx of reliable EMD GP382s and GP39-2s made it economically and mechanically smart to congregate all of the remaining Alcos near the Colonie shops. So, even though some escaped to other parts of the system most were based in the Colonie Main area. Some lasted into the late 1980s, but they were likely on the Colonie dead line at that point. And, the engines were filthy by 1984. The sharp zebra stripe scheme looked dingy, anything with the lightning stripe scheme was severely faded, most had their numbers worn off, and the Geeps frequently had their previous owner's scheme coming through. 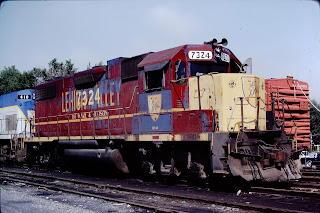 The D&H also had patch paints (LV red, L&HR blue and white, CR blue engines), the Bicentennial #506, and several one-offs. The quality of the paint jobs seemed to run from very good (the Alco Centurys done in Hornell) to absolutely horrible. That being said, I plan to use restraint in compiling my HO scale roster. Because I like Alcos, I will lean heavily on the four classes that were prevalent in the area: RS36s and RS3ms for mainline and yard assignments, RS3s for yards, and RS11s for mainline and local trains.

I would be remiss without mentioning Scot Lawrence's compilation of engines that the D&H owned prior to Guildford's takeover on 1/04/1984. While our lists aren't a perfect match, they are certainly very close. I likely had resources he didn't have and vice versa, and his list is for January while mine is for May. Still, it is very useful. There were also engines acquired from Guilford (transferred from the B&M or Maine Central), including types that would normally not have been found the D&H. I haven't fully tracked everything down yet that was painted for Guilford but lettered for D&H. 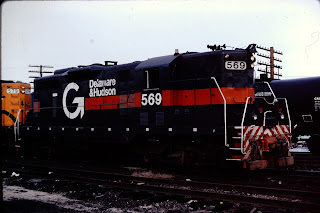 I am very excited about modeling high-nose Geep #569, which was used for their executive and special railfan trains during the early period of Guilford's ownership. In January 1984, MEC GP7's #569 & #573 (which had recently been repainted in the new Guilford paint scheme) were relettered D&H. The #573 was subsequently lettered MEC later in 1984, but #569 kept its D&H lettering until 1988. I love high-nose units, and being able to model a first-generation EMD engine will add some diversity. They also leased six Conrail U33B engines in 1984 which were patch painted and lettered. They lasted a couple of years.

Here is the 1984 D&H roster with paint schemes as best as I can put it together:

* After 1981, generally stored inactive at Colonie

As for the #7600 class (#7601-7620), of GP39-2 engines, Hal Reiser's book states that they were sent in 1984 for rebuilding by Morrison Knudson and when they returned they were painted for Guilford and lettered for the B&M. I have found no pictures of any surviving to May 1984 in D&H paint, and very few pictures exist of them after 1983.
Posted by DandHColonieMain at 10:56 AM 3 comments: