Switching boxcars in the yard

I decided to run some trains on my layout, which hadn't seen any in at least the last six months. Having worked on scenery and ballasting, the rails were covered in dirt and glue residue. So, out came the Brightboy to shine them up. My buildings got in the way of the yard area, and the trees on the hill on Cut Corner interfered with the curved switch. But, I managed. I dug out some boxcars (14) because I like them, and grabbed my new Atlas RS11 #5005 with the sound. 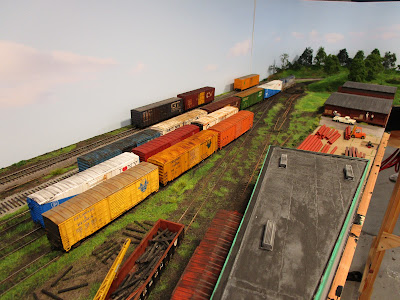 But I couldn't get the train to run! After checking everything out, I realized that I had the DCC system wired up incorrectly. I bought an upgraded ProCab NCE system to replace the PowerCab and made a couple of assumptions with the wires. I was wrong. But, a couple of frustrating hours later I stripped it all out and started fresh and it worked fine. 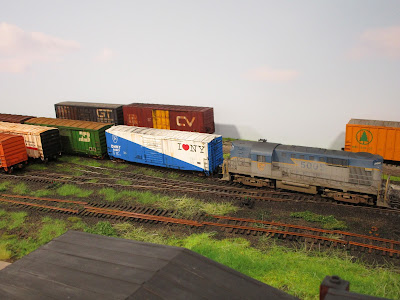 Then, as I was switching cars in the yard some wobbled and derailed. When I built the kits I hadn't put any washers on the truck kingpins and thought I had left enough room for the trucks to twist and bend, but I hadn't. So, that was fixed. 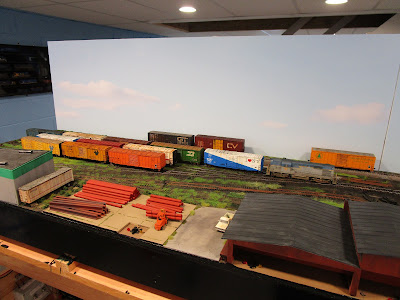 Finally, I saw that 14 cars swamped the yard with little room for maneuvering. And I had only cleaned as much track as can be seen in the pictures, so I couldn't go very far with the train.

But... it was a start. However, now I am tired of the wiring, cleaning track, and adjusting freight car trucks and don't want to bother cleaning the rest of the mainline for an actual run!

Posted by DandHColonieMain at 5:56 AM