I really love the D&H's blue Oneonta glass service hopper cars. I have written about them in the past, and built a couple model of them (here and here). I know some of the cars existed into the late-1980s though I am pretty certain that the glass recycling program was over by they. I don't know when it stopped, but some of the cars likely were used for hauling other commodities by the early 1980s.

When I saw this slide on Ebay I jumped on it. At first, I was drawn to the engines and it wasn't until I looked closer that I saw the hopper cars weren't gray, but actually a faded blue! It is dated September 1982, and it looks like both hoppers were once Oneonta glass service cars. The numbers are patch-painted out so no help in tracing them there. However, on the right panels is what looks like "MOW DEPT" stenciled on. I can't imagine why a typical ballast train would require four engines but perhaps the cars were being transferred to a different division where the gravel was needed. 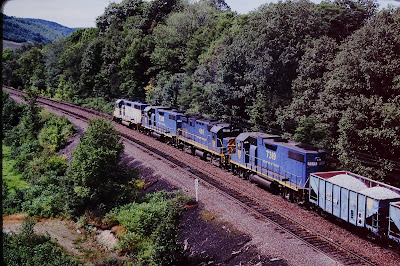 Posted by DandHColonieMain at 11:54 AM