Call in the crane train! 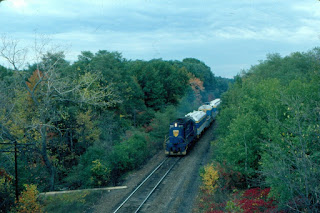 In November 1979, the D&H had to call for the wreck train. This shot shows the train in Rotterdam heading South. No idea what the need was based on, but I thought it made a nice shot. I plan to model the MOW train in the future, but by then nearly everything was just blue instead of this snazzy blue/gray/yellow scheme.

Posted by DandHColonieMain at 2:03 PM No comments: 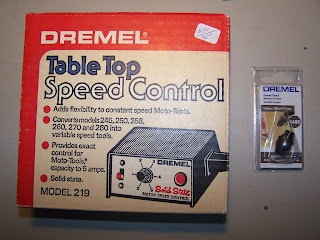 Though I haven't touched it in several weeks, my excuse for the lack of progress on my D&H bobber caboose has been that I have to drill some holes for marker light brackets. Those holes have to be small, and they have to be accurate. I recently bought a new pin vice, but I wanted to try my hand at using a Dremel 200 series motor tool to drill small holes. This requires two things: a #4486 keyless chuck (to hold the drill bits) and a speed controller (to slow down the RPMs so that you actually drill the plastic before the bit snaps and flies off to wherever. I purchased the chuck on EBay. BE WARNED: there are many Chinese knockoffs also on EBay under the same listing. I assume the Dremel plastic clam shell packaging means mine is authentic. I looked at foot switches, but then at a recent train show I found this.

So, I might just try the chuck and the slow setting on my Dremel 200-series and see what happens. If anyone is interested in the speed control, I will give you a good deal on it!
Posted by DandHColonieMain at 1:28 PM No comments: