This is the time when the rubber hits the road. As I was trying to finalize how I would build my layout sections I thought that it might be useful to do a more detailed sketch of exactly how I envisioned my train layout would look. Admittedly, I am sure that once it is built and I am sketching it again in full size some things might change. However, we will call this a "Feasibility Study" of the layout. 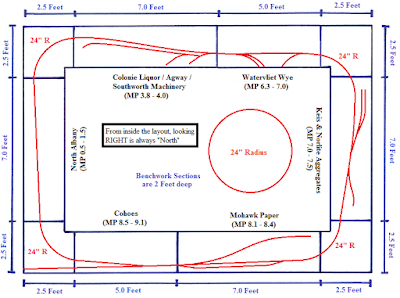 Ideally, my layout sections would be no more than 2 feet wide and no more than 6 feet long. Some recent articles in the modeling magazines have advocated for narrower (thinner) layout sections, saying that 2 feet just used up lots of scenery materials without any appreciable benefit. That might be true for those modelers building double-deck layouts were the focus is to move trains, but I want my layout's focus be to accurately represent scenes, and I don't think I can accomplish that on a section only a foot deep.

As to length, at least two of my scenes will need to be 7 feet long. Minimum. Sure, I could make them as a 3 foot and four foot combination but that will just increase the number of joints in the finished scene. I want to avoid that. I already will have numerous gaps between sections. Since my basement has easy access to the outside, and because I will make sure if I move to pick a new house with a basement that can easily move in 7 foot long sections of benchwork, I should be fine. I hope.

For the 2 of you who actually studied my sketch from 9/11/2016, you will notice that I inverted the locations of Watervliet Wye and Colonie Liquor. I was rushing, that's for sure. But, I really haven't don't much planning for Watervliet Wye and so I didn't put much thought into it. I haven't explored that area, taken any pictures, sketched and diagrams, etc. I will, I am sure, But, since it isn't the most accessible area to get into I have left it for now. Thus, I threw some ideas together but they are just that, rough ideas.

Frankly, I may discover that 5 feet isn't enough room to do it justice and I may just use that area to model the area just south of Colonie Liquor. (I would swap the Colonie Liquor section and the Watervliet Wye section, because the part is south of Colonie Liquor). There is an interstate (I-378) overpass and an old Erie Canal lock, so it would be fun to build. And, I can build the park where I used to sit and railfan while in law school. So, the Watervliet Wye area is a very strong "maybe" and nothing more. Still, you can see that it faces inwards which means that I could hinge a drop-down layout section for normal storage but raise it up if putting cars on the wye tracks would add anything operationally to the layout.

Mohawk Paper is another question mark. I don't want to model the full industry, and I actually care more about the really neat track that drops down a significant grade through a cut in the trees and over the middle of a road intersection to reach the paper mill. That I want to model. Can I do it in 7 feet? Perhaps, but it will mostly depend on the grade I use. If I use a steel (or realistic) grade I doubt I can drop it enough in the space I have. But, making the scene longer just to feature that grade doesn't make a lot of sense. So, the area next to Mohawk Paper labeled Cohoes may not feature the parts of Cohoes I wanted to model (the bridge over the Mohawk River, the old warehouses, the Cohoes passenger station) and instead will just be a continuation of the paper mill scene. Again, we shall see.
Posted by DandHColonieMain at 5:34 AM No comments: