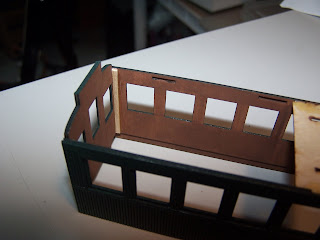 While the roof and frames were out getting chopped, I decided to work on the body. Using a square to ensure good joints, I used a toothpick to apply some wood glue to each end and joined it to a side, forming an "L" shape. Despite advice not to, I did attach a short piece of stripwood to the inside corner at the joint just to give it a little strength. I cut it short so it didn't reach the top or the bottom of the joint, which hopefully will prevent it from fouling the frame or roof. I used what I had on hand, which is why it looks so tiny. I am not really sure it added much, but it did increase the glue joint area. One thing is for sure... I will need to treat this car more gingerly than a typical plastic boxcar. 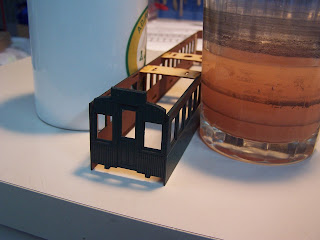 Then, once that set I glued the two assemblies together into one body. The kit provides three pieces of wood that are glued along the top between the two sides. They have slits and holes in them to remount the Bachmann "interior lighting" provided with the original car. I had thrown that all away, because I hate flickering lights, light that bleeds out of car joints, hiding batteries to power lights in lieu of track power, and in general it looks lame. But, it was great attention to detail by Deerfield River Laser. I glued each roof support one at a time and let each cure before moving to the next one. To keep the sides in position and the right distance while the glue set, I used two drinking cups. The one on the right, by the way, is my paint brush rinse glass. 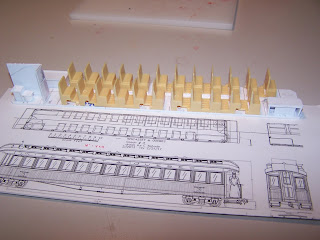 Finally, after seeing the interior drawing of the coach on Eric Shade's website I decided to try and build an interior. It wasn't going to be perfect because I was using the Bachmann seats I already had, which aren't exact matches for the flip seats in the real coach. One issue I ran into was that the prototype coach is 15 windows long, but the model is 16 windows long. So, to keep the chairs in line with the windows (thankfully, they had the same spacing) I had a larger gap at one end of the car. Still, I doubt anyone will notice. But, I had some free time and wanted to work on something so off I went. I used a knife to cut the seats along the aisle from the rest of the floor, and then glued a strip of 0.060" square styrene along the bottom of one side to allow the chairs to sit level. 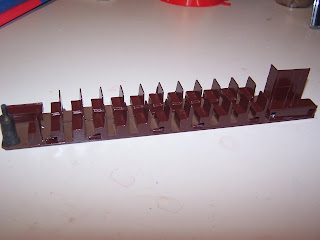 The floor, benches, bathroom walls, and toilet were all built out of styrene. I used some strips of styrene to add paneling detail, door frames, etc. Nothing very detailed, as it wouldn't really be visible through the windows. Then, everything was given a spray coat of a dark brown/maroon color to represent the dark paneling inside. I painted the floor a different shade of brown, and the stove on the end was painted black and given "rust" and "dirt" highlights. If I am smart, I will make sure to align the end of the roof with the smoke jack with this end of the coach. The toilet was painted white. Again, since the car doesn't have lighting it won't matter too much. 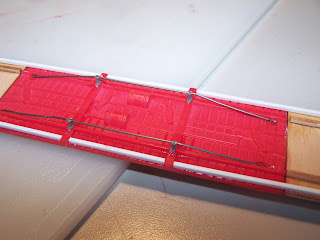 Then, a package arrived in the mail from Scot. Thanks! He cut down 1/4" off the sides of the floors, and removed the same amount from the centerline of the roofs. As it stands, because I am building this kit and in a sense reviewing it (though not at the request of D.R.L.) I figured I would use the frame that had the wooden braces. I took an Xacto knife and cleaned up the various bits of stray plastic that had melted and then cooled along the edges of the cut lines. It came off easy enough. Then, I glued some strips of 0.060" square styrene along the edges to represent the floor beams that were cut away. Because they will be hidden anyway underneath I didn't measure where they went and just did it by eye.

I also installed truss rods bent from 1/32" steel wire. They were supported by truss rod support castings I purchased from Grandt Line. I also purchased turnbuckle castings from them, but they were cored for 0.025" wire and my 1/32" wire was slightly too large (0.006!) and they wouldn't fit. So, I left them off. I may try and cut them in half and glue them around the wire later. 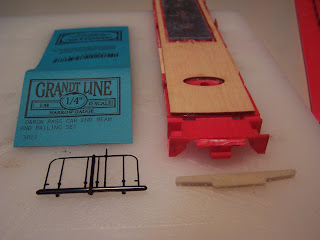 I also purchased Grandt Line end beam and railing castings, which were somewhat necessary and I totally destroyed the Bachmann plastic railings that came with the cars. I thought about soldering up replacement railings, but these were only about $3 so it is worth trying them first. Those railings still look awful delicate and I wonder if anyone sells pre-bent metal railings that I could adapt to this car. The end beams are too wide for a 2-foot car, so I narrowed them and then glued them onto the modified frames. One other detail not shown in this picture is the bottom steps. Once the sides were narrowed, the bottom step nearly disappeared. While the steps on the Bachmann car look nothing like the prototype, I am willing to live with that. But, I added some styrene at the corners to extend them out to look better. 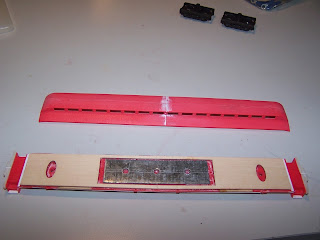 The ceiling was glued back together by adding some more styrene braces on the interior, and flooding the inside of the roof with MEK. It softened the plastic and when I pushed the two pieces of the roof together the oozed into one. I had applied some blue painters tape on the outside beforehand, which captured everything and served as a clamp and a form. The next day, I removed it and lightly sanded it. Then, some Squadron White putty applied over the joints and more sanding nearly made the joint invisible. A thorough washing of the frame and roof in soapy water and a good rinsing left them ready for painting.
Posted by DandHColonieMain at 5:32 PM No comments:

Then, I started placing the sections together on the supporting framework. Some of the cross-braces were moved to better support the corners. Some leveling was necessary too. It was frustrating, because no matter how hard I tried to make each of the sections perfectly square and even (with the plywood neither extending beyond or coming up short) with the 1x4" frame it wasn't perfect. Had I not been building a sectional layout, it wouldn't have mattered as much. Even worse, my 1x4 " lumber wasn't a consistent thickness (sometimes as much as 1/8" off) but I didn't realize it when I was building my sections. Thus, leveling the L-girder supports didn't help and the benchwork just didn't line up. 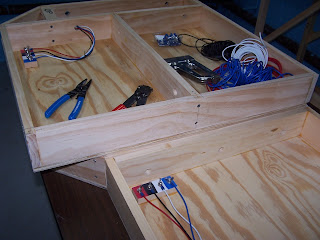 Deciding to put it on hold for awhile, I ordered a bunch of wire in four colors and prepared to pre-wise the bus lines for the layout sections, Each will have four 14 gauge wires running the length of the sections. Red and Black wires will be for track power (DCC bus lines), and Blue and White will be power for the Tortoise switch machines. The cross braces were already drilled with holes for the wires to safely pass through, but the ends presented a problem. I stapled a twist tie in a couple of places to the underside, and it is easy to use that to secure the loose wires (but allow for easy adjustment later). I thought about buying screw terminals but accessing them every time I wanted to disconnect the wires to remove a section seemed problematic. So, I made some with 1/4-20 bolts and wing nuts mounted into holes drilled in some wood trim I found lying around. 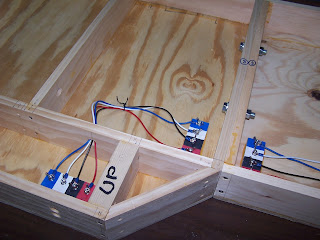 While I was working, I decided to put on the soundtrack CDs to Star Wars Episodes IV-VI. Five hours later, I had a different plan. I would make sure the tops of the sections were level and then bolt them together, to be semi-permanently joined. Once the track is laid and wired up, I likely won't be taking them apart or moving them again except in extreme circumstances (such as remodeling the basement, moving to a new house, or re-configuring them. So, I put them upside down on my work table and drilled for 1/2" diameter bolts. Of course, it took me three trips to two different hardware stores to get the right number (and size) bolts, nuts, and washers. That's how it goes. 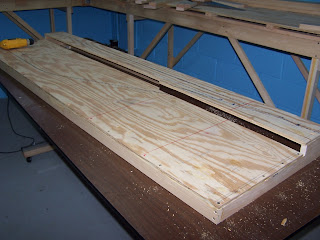 Next, I decided to put my new jigsaw to use. I had previously sketched out how the Mohawk Paper module would look, which is a bit interesting with its multi-level right-of-way, intersecting streets, multiple crossings, and even a bit of track that is "hidden" in a small forest. Building benchwork here would require thinking from the ground up. I planned on doing a "cookie cutter" approach until I saw an advertisement for Woodland Scenics foam incline risers. They are available in 2% and 4%. I will check them out. Had I decided to have the plywood make the ramp, it would have involved a grade on an "S" curve and the joints at the top/bottom of the grade likely would have been badly joined. 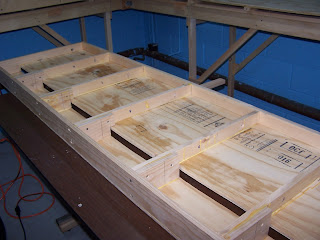 I then cut the intermediary crossbraces, which needed to be trimmed along the top. Instead, I made them all out of the thinner (in height) wood I had, and added a full-height piece of 1x4" lumber on the back end. This is a big clunkier, and certainly a little bit heavier, but it also meant I didn't need to use the jigsaw constantly. And, they are consistently high throughout. Another decision was necessary here, and it is somewhat of a big one. I could either make the ends of the section full-height 1x4" (actually 3.5") or cut it down so that the scenery on the lower part of this section can cascade onto the adjoining sections. I mulled it over and chose the later. The lumber for this section was another $20.

While it looks somewhat silly now with the roads ending at the next piece of benchwork, if I ever expand the layout I will be able lengthen the scene without having to hack away the end 1x4s. Besides, there really is no easy way to do this considering the corner sections on either side are definitely not going to be ramped to meet the lower area. When I take pictures of this section, I will just need to be careful with my viewing angles. 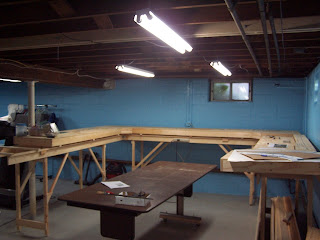 With the benchwork now 75% of the way around the area, I only need to work on one more corner section and the straight section for the "entrance" side. My goal of having a train run around the mainline by the end of 2017 seems realistic. However, since I don't know what I am modeling for the fourth section, I need to do some more research. Running total for benchwork is now $586 + $20 for the lumber for the Mohawk Paper section, so $606 total.
Posted by DandHColonieMain at 4:59 PM No comments: