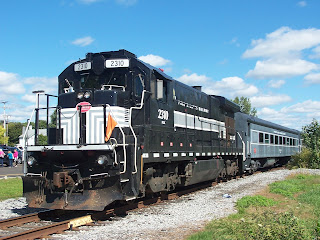 Western New York State is filled with an amazing amount of short line railroads, many of which were spun off from Conrail during the 1980s and 1990s as it cut back services on branchlines or parallel routes. Railroads such as the Buffalo Southern; Ontario Central; Ontario Midland; Lavonia, Avon & Lakeville; New York and Erie; Western New York and Pennsylvania; and Bath and Hammondsport jump out at me. Another one is the Finger Lakes Railway. Most of these lines are small operations which pale in comparison to NS or CSX, and rarely do they offer any sort of passenger excursion service. 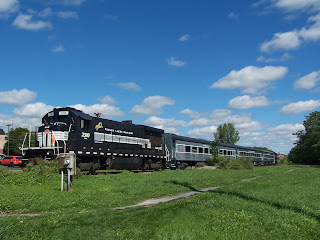 It's hard to blame them. It costs a lot of money to purchase passenger equipment and maintain it in decent condition, and with the cost of insurance and the hassle of running weekend crews the cost/benefit analysis rarely makes it economically viable. Still, a couple of short lines do it well (such as the Arcade and Attica Railroad, which I have written about extensively elsewhere on this blog). I had also heard rumors that the Finger Lakes Railway had a couple of coaches and ran occasional scenic train trips, but not living in the area anymore I always found out about it too late. But, recently I saw that the Rochester and Genesee Valley Railroad Museum was sponsoring a trip on the line as a fund raiser, and figured it would make for a good excuse to come out west. Besides, if I waited for the "next time" it might not ever happen. So, I bought tickets for the "Finger Lakes Limited" and it is a good thing I did as they sold out both trips quickly. 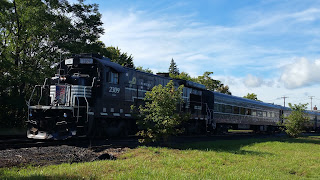 The FLR takes a lot of pride in their image. Running over NYC tracks (at least in part), they have adopted the familiar NYC "lightning stripe" scheme for some of their engines. Their coaches are also decked out in the gray scheme with white stripes. Tragically, the sun has taken its toll on the side of the train facing the sun and my pictures show the coaches as faded, which they are. The other side of the train, which I only took shots of in the shade, is still bright and shiny. 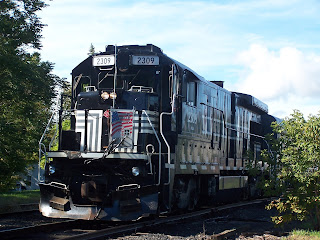 The train had three coaches including one that was being used for local brewery taste testing. Not being a fan of beer, I stayed in my car and enjoyed cheap soda. My wife and father-in-law were along for the ride and we all had a great time. The train was top and tailed (in British slang) with an engine on each end as to avoid requiring a runaround move at the ends of the trip. Oddly, one engine looked like it had R/C connections set up but I don't know if it was being used by the crew. I saw them switch sides at the end of the trip. The engines were both GE products and sounded good, though not as good as an Alco! 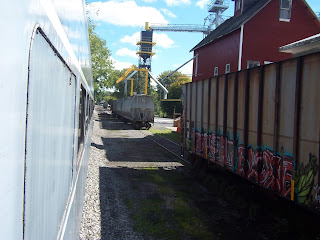 The train went from Canandaigua to Clifton Springs, but based on the routing it was essentially from almost somewhere to practically nowhere and return. As a rail buff, there wasn't too much to see besides farms and roads. An occasional former industry with the track pulled, maybe a branch line switch, and some stacks of ties dotted the right of way. The end was a grain facility, and we couldn't get out to take pictures. As a result, all my exterior shots were done from the open vestibule door. It was as close to an "open car" and I could get. That being said, the wind was still blowing through the doorway and the horn was loud.

All in all, I had a good time. I am glad I can check FLR off my railroad bucket list.
Posted by DandHColonieMain at 12:19 PM No comments:

This past spring, the local division (Hudson Berkshire) of the NMRA inquired in their newsletter about whether there was any interest in modelers getting together somewhat regularly to work on their NMRA Master Model Railroader certifications. I am actively working on two certificates now but could always use advice and encouragement. The group was to be led by MMR Robert "Bob" Hamm, who was (and maybe still is) the NMRA's National Model Contest chairman. Not only was he willing to give us inside advice and sage wisdom on building models, but he was willing to work with us as we came across problems in our own models. How could I turn down an offer like that?

I didn't want to work on the "Structures" certificate, because I didn't want to build buildings that would just sit around with nowhere to put them. Many of the structures on my layout will be scratchbuilt, but I am not to the place yet where I know their exact dimensions. So, I am focusing on Master Builder - Cars. Eight cars must be super detailed, and at least four of them must be scratchbuilt. Four of them must also earn at least 87.5 points during AP Merit Judging. So, not an easy task. But an obtainable one.

While everyone else in the group is working on structures, I picked a caboose to be my first scratchbuilt car. I probably should have picked a flat car, but I didn't. I really, really love DL&W cabooses with their pleasing symmetry, but as a first attempt it would be tough even though this online slide show presentation starting on page 15 breaks it all down. I think I may build one in 1/8 scale someday, but not today. No, I picked a simpler caboose to model. 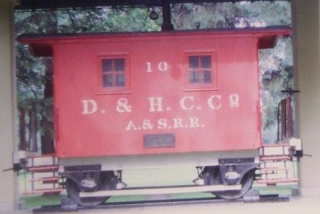 A bobber caboose! While toyish, they are definitely smaller and have less windows and roof lines to deal with. Wanting to pick a prototype one to model, I didn't have to look farther than the D&H's own famous #10 caboose. This was the caboose where the first meeting of the Brotherhood of Railroad Trainmen was held in 1883, and it was preserved and is still in Neahwa Park in Oneonta, NY. More importantly, though, was that plans for it were published in the October 1965 issue of Model Railroader.

It had some interesting features which I thought would make it fun to build. First, it used cast journals which look nothing like anything else so I would have to build them (read: extra points if done well). Also, it had no cupola so I could avoid the dreaded seams between pieces which can cost you points during judging. And, it is in great preserved condition so I could weather it lightly.  It even has a seat on the top for a very brave brakeman to ride. I know I wouldn't! 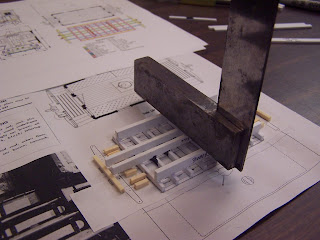 I copied the prints multiple times and used some stripwood (actually, HO scale ties) to build a fixture to lay out the underframe. I had never built a car like this before so I used what I was familiar with, styrene. Some pieces, like the end beams, were made up of multiple laminations of styrene that were then filed to shape. To apply my solvent of choice, MEK, I bought a really snazzy Needle-point applicator bottle from A-West. I picked the 1" tip, size #16 (their smallest) and it still puts out a lot if you squeeze. And, you need to be careful not to bend the tip. But, it works awesome. Why didn't I know about this sooner? 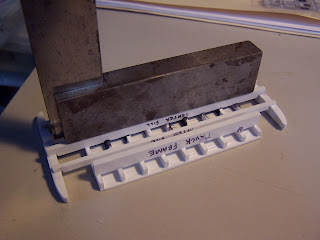 The floor beams were notched for the end beams to fit in, and there was a slight gap under one so I snuck in some 0.010" styrene and trimmed it so that no one will ever know. Well, except the readers of my blog. Oops! The floor is some scribed Evergreen freight car 0.040" thick styrene that I used for the caboose sides. I made sure to have the scribed side face down so it could be seen from below. For the interior floor, I will just put another piece on top facing up. I then took some sandpaper and roughed up the sides of all the boards a little to give it some grain (which I probably should have done before gluing it all together. 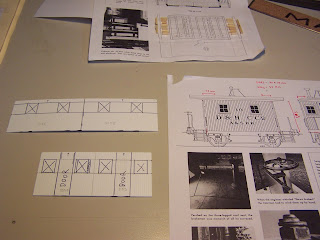 The sides are more of the 0.040" thick scribed styrene. I laid out the pieces based on the plans but occasionally I had to stretch the length to get a full board's width in. The windows as well were laid out to fall between the scribed board lines. It was now that I fully realized the value of building this model in O scale instead of HO. I had been concerned that it would be too tiny to handle, and indeed even in O scale it is a small model. HO scale would have been a nightmare to build (in N scale, it would be under 1.5" long)! Plus, working in a different scale allows you to try new things. 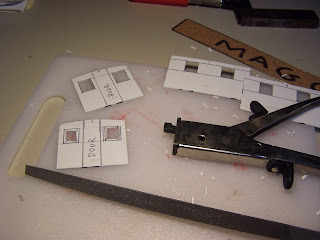 The ends were laid out the same way, though for the roof curvature I used the very scientific method of taking the drawing and cutting outside the roof line to make a template which I then traced onto the ends. After that was done, I used a sharp knife and a nibbler to remove the window material and a file to clean up the edges. The board edges also made it easy to see where I needed to remove material. I left the door areas in place temporarily because removing them would leave the ends too fragile to work on and, as it turned out, I didn't now yet how I wanted to handle the doors. 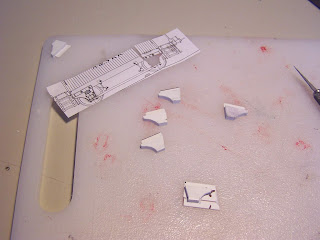 The prototype journals are castings that are pretty distinctive. I looked online at the O scale casting suppliers that I could find (a Walthers catalog would have been helpful) and didn't see anything remotely like it. Nor could I adapt the old Atlas bobber caboose frame to fit. So, I would need to build them from scratch. I took the paper and cut it out and traced the shape onto some styrene. I made 6, three of each side (left/right) and would later pick out the four best. To get the right contour, I had to use three pieces of 0.080" styrene for the first layout, which I then topped with some thin 0.020 to hide the seams. This was filed down to shape, with a portion extending above the journal to represent the area that would bolt onto the truck sideframes. 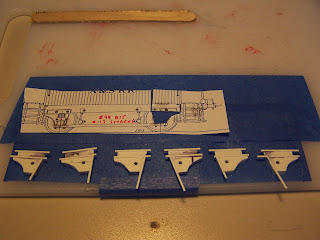 Next, I some 0.015" thick x 0.040" wide styrene to make the raised edges around the through the castings. Each piece was cut, glued, allowed to dry, and then trimmed. For the curved edge, I tried bending the styrene slowly and gluing it little by little but it buckled. I then applied the curve in three shorter pieces but it still required filling between the pieces with putty. Bob Hamm suggested I use some 0.040" square stock (which I had on hand) to do the curve and because it was thicker it didn't buckle. Once cured, I sanded it down to 0.015" thick and it matched the rest perfectly. Then, I flooded the journals with MEK to soften/round the edges and look more like castings.
Posted by DandHColonieMain at 9:36 AM 3 comments: