Voorheesville, NY, is a place that always makes me smile and not because I am told I can't pronounce it correctly (hey, I'm not local). No, I grin because of my railfan ignorance of the area. When I moved to Albany from Rochester in the mid-2000s there were several railfan areas I wanted to explore. After looking are printed paper maps, I drove up to Mechanicville and discovered that the huge yards were long gone (of course, things have changed as documented earlier here). I also went to Rotterdam Junction on the south side to capture the West Shore Railroad, only to discover that it had been torn up and there were no tracks to see (though CSX still ran on the north side of the river, which later became my primary spotting area). And there was the D&H/CSH diamond in Voorheesville, which on paper still existed but was long gone by the time I first visited. These photos are from that day on September 05, 2009. Per online sources, it was torn out in June of 2000 but of course my gas station map didn't show it. At one time, it was a busy crossing. Here is a good online resource for local train information. 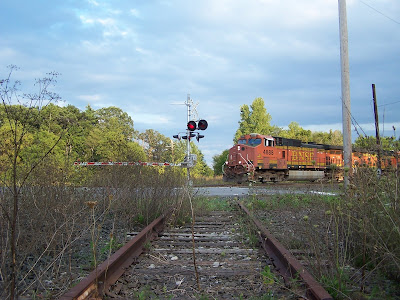 As part of CSX's acquisition of Pan Am Railways, there have been talks of Norfolk Southern being given access to run double stack trains over the old D&H connector track onto CSX and then east to Worchester/Ayer. For those unfamiliar with the area, I drew up a simple schematic. The dotted lines below are D&H tracks that are now a rail trail. 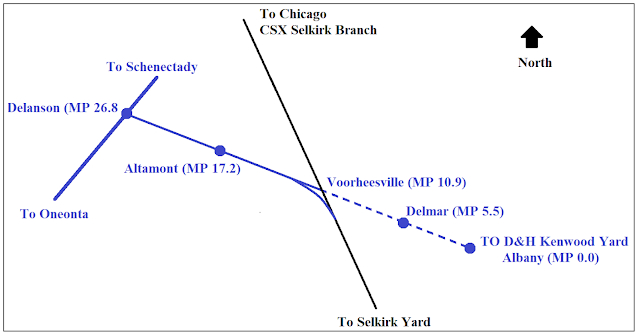 I thought I would head over to the old diamond again and take some "now" shots before it is rebuilt. I hadn't been there in years, as I discovered more trains ran through Amsterdam, NY, so I always headed there for a day of railfanning. But, returning with my wife for a couple of hours on a cold winter day brought back good memories of the place.

At that time, the D&H's tracks south/west of the diamond were torn up for a little ways, though they were still in place farther back. You can see in this first shot just to the left of the road part of a D&H track. The CSX train is heading south-east. With a railroad diamond nearly intersecting a roadway, it must have been a nightmare for drivers and train crews. 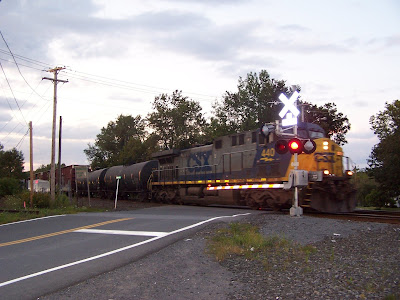 This nifty shot below shows the western part of the D&H track as it terminated at the road. In the distance through the centerbeam car is the old Albany Main, later renamed Voorheesville Running Track. It had extended into the distance due east to Albany, but at this time was torn up. To the left was a gravel parking lot in the shade where I would sit and watch trains. 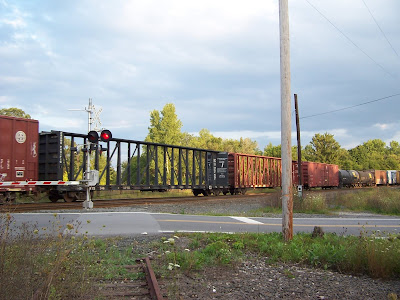 Another shot showing the empty right of way heading to Albany. 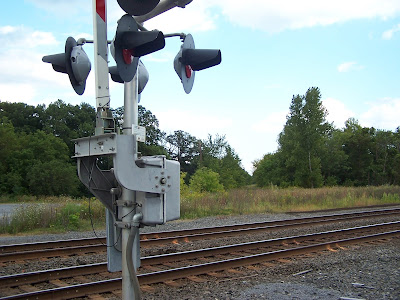 In the shot below, the connnector track between the D&H (to the lower right) and CSX (the mainline heading off southwest as it goes into the distance) can be seen. 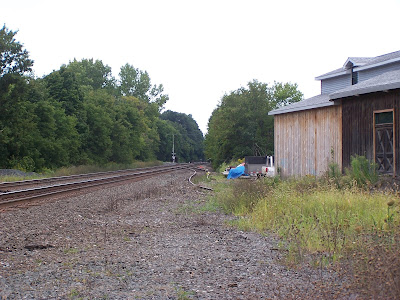 The next few shots are from April 03, 2010. You can see in this shot that the old roadbed heading towards Albany still was nice, flat, and clear. This would prove useful for future developments, as we shall see. 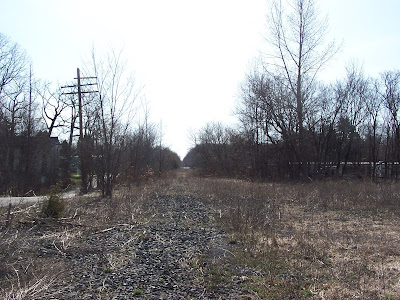 Turning the other way, and facing west, a scrap train is visible in the distance. There were I think at least a half-dozen gondolas that I saw through the trees while driving on a parallel road. I don't know when the rails were actually removed though. 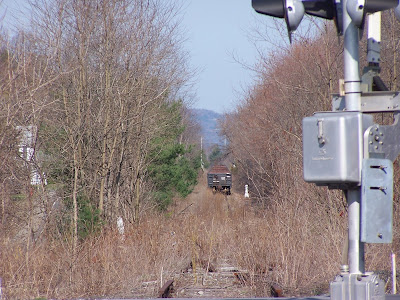 The same direction, just zoomed out more. I am standing with my back to the old diamond, and you can see the connecting track breaking off and curving to the left. Oddly, some rails are removed in the track between me and the switch. Perhaps that was done to legally "break" any connection to the diamond? 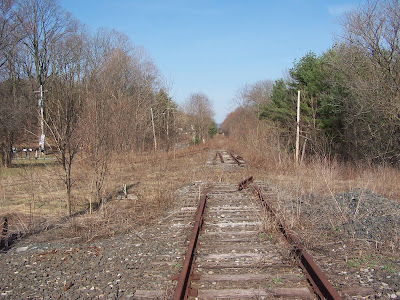 Here is the connecting track as it swung off the D&H (to the left) and headed towards CSX (to my right and behind me). This track probably hadn't been used in a quite a while, and the nearby business was encroaching in the right-of-way. 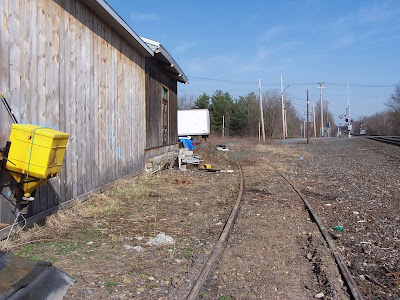 One of my favorite diesel locomotives of all time is the EMD SD40-2. I don't know why, but I think the long porches on either end made it easy for me to spot as a kid. I had an Athearn model painted for the BN, and wish I still had it. It was a gift from my grandfather. Anyway, I hadn't seen them in many years when this train showed up led by CSX #8364. 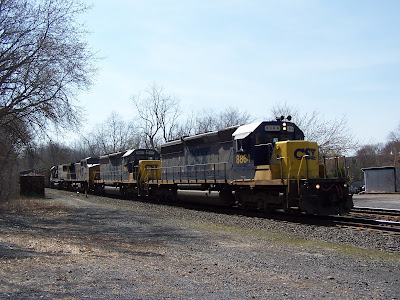 Fast forward to January 02, 2015, and I must have been bored from an uneventful New Year's Day previously because I went railfanning in the cold. Looking northwest on CSX, the control point interlocking was visible and several trains were waiting to head southeast. 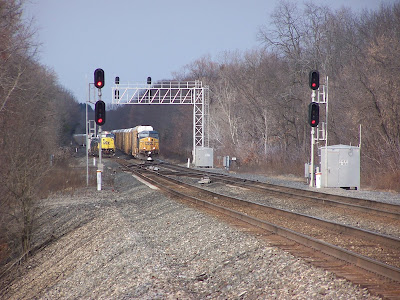 One of them contained an old BCRail locomotive, the only one I believe I have ever seen (there certainly weren't that many total). 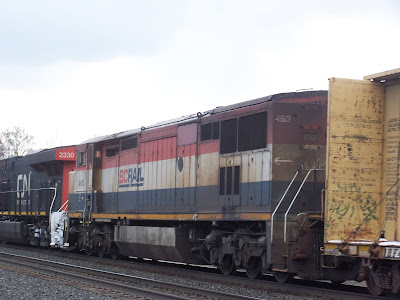 This is what the connecting track looked like, now with its own red flag and derail on the right rail. I think CSX sometimes parked MOW equipment on it, and so this let the crew know where to stop. In the distance are a pair of engines that I saw go back and forth several times this day. They were stopped and the crew had gotten off to get lunch at the diner located right next to the engines. It was neat to see. 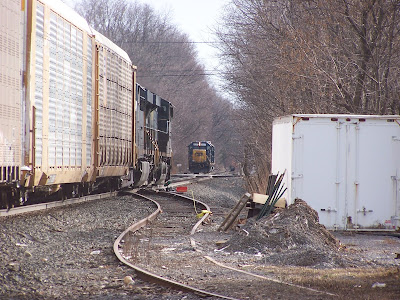 Then, several interesting things happened. New York State loves putting money into rail trails (and, unfortunately, ripping up tracks in the process) and the Albany County Rail Trail was paved between Albany and Voorheesville. They put up informational maps, displays, and built a pavilion in the shape of the old D&H Voorheesville station. The trail leading away from the viewer heads towards Albany. I took these shots when I went back on March 13, 2021. 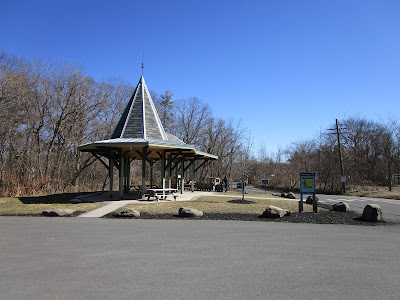 Near the train tracks themselves, another viewing platform was set up. This is located with the rail trail heading towards Albany to the left, and the CSX tracks heading southeast to the right. It was too cold this day to sit in the pavilion and watch trains, but I will come here more during the nicer weather. 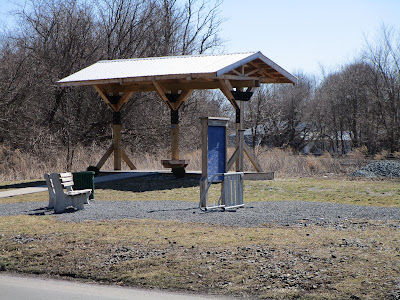 If Norfolk Southern is going to run double stack trains onto CSX, then the connecting track will definitely need to be rebuilt. This is the view of it now. 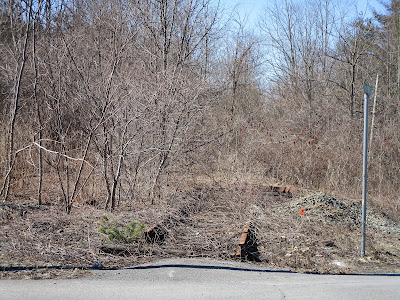 The track is still there and curves towards CSX in the background, but the business has completely taken over the lot. 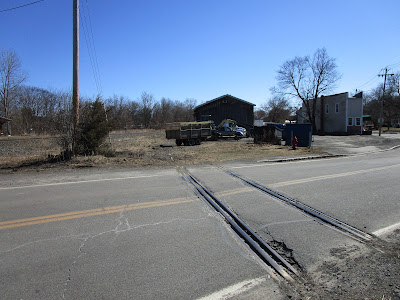 The switch onto CSX is there, but everything else is buried in dirt and weeds. 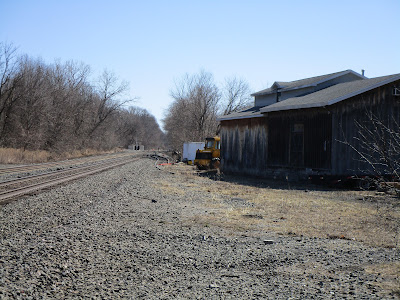 But, its encouraging to see old track come back to life. I took these shots to record for history what it looked like now. Will the connector ever get rebuilt? We shall see. But, I know I want to come back here now sometime and railfan. In the "old days", it was an unknown location but now with the Pavilion and such I hope there aren't too many people about. The day I was here, a bunch of kids were running over the tracks and taking pictures and it is this sort of thing I try to avoid.

Posted by DandHColonieMain at 6:04 AM