A Curved Backdrop for Cut Corner

"Cut Corner" has been waiting for its backdrop for a while now. Because of the angled geometry of the back corner (with its piece "cut off", hence the name), a rounded backdrop wasn't the easiest thing to pull off. So, I had made a three-piece angled backdrop support. However, I still wanted to round over the edges on the inside to make the sky's bend less jarring. And that called for styrene. Unfortunately, I had run out of 0.040" thick stuff. So, more was ordered from the local plastic distributor. I brought it home rolled up so it would fit in my little Toyota. I had to purchase two sheets as they didn't sell them individually. 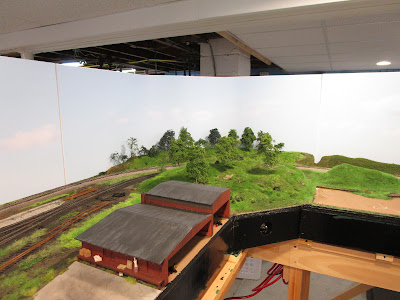 Next, I roughly calculated the length of the backdrop. The radius around the back of the curve is 30", which means that the circumference of the circle is 188.5". Thus, the one-quarter Arc I needed was around 48" long. A handy online calculator is here. I could have cut the styrene across the full width of the sheet as it was 48" wide, but that left no room for error in my math. So, instead I cut a strip 16" tall the entire length of the sheet (8 feet). My backdrops are 20" tall, but only 16" shows above the plywood table top.

I then gave it a good rinsing in the shower as styrene comes from the manufacturer dusty. In the process, I managed to knock down the sprung shower curtain bar. I had the choice to grab the falling bar or my styrene and protect one from the floor... and you know which one I safely secured. I mean, you can get a shower curtain bar anywhere... 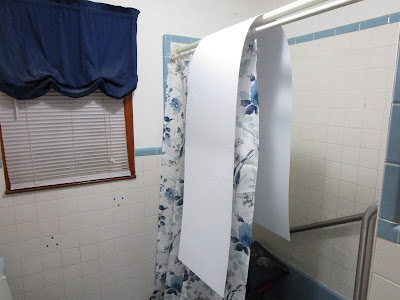 After that, I tested the styrene on the backdrop Gatorfoam substructure and it looked like it needed to be trimmed to 52" long, which is what I did next. 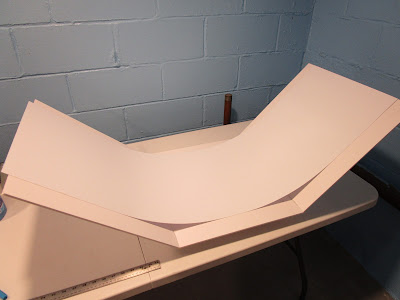 Then, the wife's help, I mounted the vinyl backdrop print from LARC Products to the styrene. It wasn't as easy this time for some reason, and we had to unstick and reapply it several times. But in the end, we got it done. The styrene was then loosely mounted to the Gatorfoam with foam double-sided tape at the ends and in the very middle. I still need to make some clips to go along the top of the backdrop joints to hold them together, but from normal viewing heights they look fine. I also reconfigured the trees along the back to try and make them look fuller.

Posted by DandHColonieMain at 4:55 AM