Well, its Sunday of the Springfield train show weekend and normally my body would be stiff from walking around for 7 hours on hard concrete floors looking for amazing train finds. Sadly, the Springfield Train Show but it isn't meant to be this year. That means my hobby money I had saved up to spend there is now burning a hole in my wallet. Over the past six months of working on the scenery of my layout I have avoided buying vehicles, figures, and other details online or in hobby stores. They are "little things" whose cost can quickly add up even though they really bring a layout to life.

I was hoping to search the Springfield show this year and see if I could find some good deals for them, but oh well. Instead, I decided to have a "virtual" Springfield show at a hobby store that is only about 45 minutes from my house. The owner is a great guy, they have a good selection of new and used equipment, books, and supplies, and I hadn't been there in a while. And I want to support local hobby stores during the Pandemic.

So I went a little crazy, at least by my standards. I didn't even realize until I was driving home that I bought things I normally wouldn't get there. Like old magazines, which I love. I love collecting old hobby periodicals related to model railroading that show what the ideal train layouts of that time period looked like. I have nearly all of Kalmbach's layout planning guides, but I found another for only a couple of bucks and snagged it. Many of the layouts are crammed full of track and switches but that was popular during the 1960s and 1970s. The thinking was that more industries to build and switch meant more fun. Many of the track plans had been recycled from other Kalmbach publications, too, but that is okay. I also bought a Lionel track planning book which looked interesting and cheap. 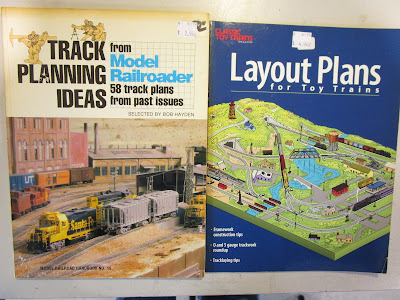 I had come mostly to pick up a D&H Walthers gondola and crane that the owner had been holding onto for me for months. I think the crane is a metal kit from Custom Finishing #247-7000 and it was put together really well. It even was lettered for the D&H. I will likely modify it a little bit in the future, but for now it will feature in my North Albany yard scene. The gondola is a recent Walthers release that is decorated in the D&H's 1980s scheme. It is perfect for my needs and it matches a prototype picture I have of a similar gondola used for similar MOW work.

I also found a Bachmann high-nose GP50 painted in the Erie Lackawanna scheme. This engine was the motive power in my first train set that I ran to death... literally. The motor burned up and melted, and the broken engine has sat in my display cabinet waiting for a new lease on life. This engine, which only cost me $10, might serve that role. At first I thought about using it as donor parts for my locomotive, but I think instead I will keep mine as-is and run this new one as a proxy. 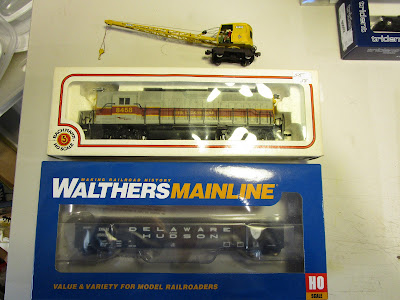 Finally, I purchased some HO scale trucks and figures to help populate my layout. The Atlas two-tone red and white truck was high on my want list for awhile, as it is a model of a 1970s truck and perfect for my layout. I purchased a similar truck in plain white just because it was there. The black truck also fits my time frame and I am not sure what I am going to do with it yet. Some of the figures are destined to work the Albany Terminal Warehouse docks. 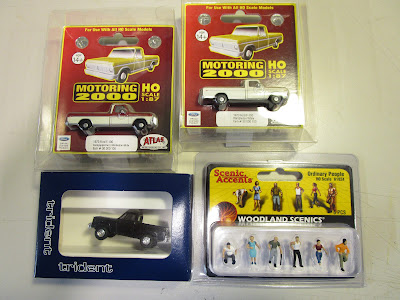 While building a layout can be expensive, it is the final 10%... the final details... that make it look special. I missed going to Springfield with my friends but I still had a fun time shopping in the store in sections I normally would skip, looking for these little things. And hopefully next year Springfield will be back.

Posted by DandHColonieMain at 7:13 AM