The (three rail) track not taken?

I have been a rubber-gauger all of my life. My first train set was HO scale, but I soon received a Lionel set too. Since then, I have purchased starter sets in N scale and G scale, was gifted a box of American Flyer trains, and have a couple of OO scale items. I have 1/8 scale trains to ride on, too. The only thing I don't have is Z scale... yet... but there are a couple of pieces I have had my eye on. I buy what makes me happy.

Part of me likes to run trains... any type of trains. Lego trains, toy trains, scale models, it just doesn't matter. I want to see them go round and round. I enjoy the noise and the lights and the smoke. It is fun and exciting. But another part of me likes to build scale models, and carefully craft scenes that match the prototype, and weather everything realistically. On occasion those two different areas of the hobby can overlap, but frequently they don't. 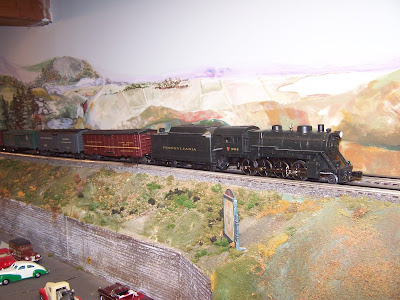 I remember visiting NMRA Division member Jack Smolik's "Not So Great Eastern" O gauge model railroad in 2012. The pictures here are from that visit. It was fun to just watch the trains go round and round. They sort of capture what I am thinking of, but not quite. 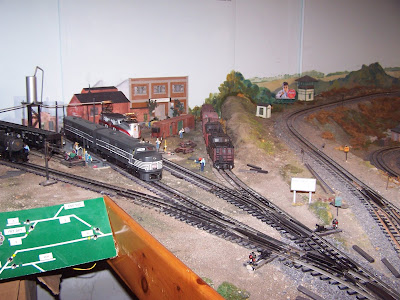 My HO layout is currently under construction, which means that there is usually a mess somewhere or another. Going down to run trains isn't always easy as I need to clean the track, remove supplies overhanging the main line, and perhaps fix some wiring. I also don't keep trains set out on the layout currently for fear of damaging them while working. So, it is a process to take them out and set them up. One thing I have noticed with Lionel (or any three-rail) tinplate trains is that they just work. You push the throttle open and they go. Rarely do you need to clean track. I like that. 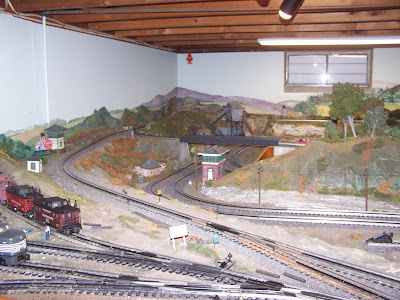 My love for Lionel and other three-rail trains isn't new. As a young child, I was a member of Rochester's Edgerton Model Railroad Club. It has been featured several times in Classic Toy Trains magazine (June and August 1991 issues) and O Scale Railroading magazine (October 1989, Run 107). It also celebrated its 70th Anniversary in 2020. My father even shared the interest with me, and at one time he was their Recording Secretary. If you read the articles, you will not see him in the pictures as he missed the day they stopped by. But he is mentioned in one of the captions. Sadly, I cannot find a single picture I took of the Edgerton train club. I should go back when the pandemic is over. 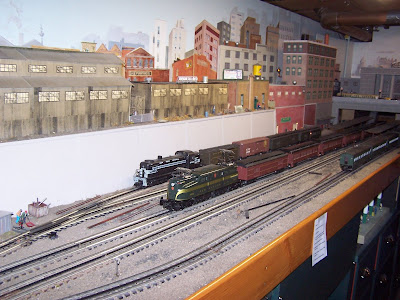 I have considered building a three-rail layout since at least 2005, when I asked online for some advice. I was serious about it when we moved into our new house, but I wanted the HO layout more. However, my current layout only takes up 1/4 of my basement. And I already know what I want on my Lionel layout. Realistic Gargraves brand track, which has wooden ties AND is made just a little outside of my hometown of Rochester. I want realistic scenery set in the fall, with a small-town atmosphere. A couple of areas to switch cars would be nice, but not many as I mostly just want to run trains around to relax and/or show friends. And I already have the track plan picked out too! It is a modified version of the track plan found here, with the second level removed and replaced with hills similar to what you would find in upstate NY and Vermont. Picture rolling hills covered in fall foliage trees, quaint wooden stations and factories, and a simple track plan that still allows for plenty of train storage. I have even contacted the author of the article and discussed it with him. He doesn't live far from me. 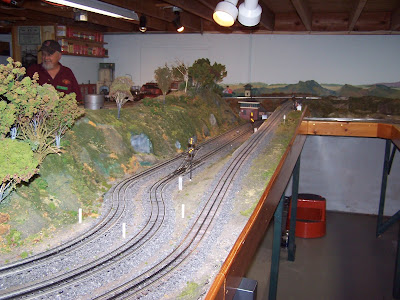 Will I ever build it? Likely someday. As I get older I know my eyes will get worse, and the larger trains will be a blessing. The track plan above won't need a large room (12'x16') which means our next house doesn't require a basement, just a larger bedroom. I already collect O scale trains despite only having the Christmas tree to run them under, but I still like to purchase more at train shows. So, by the time I am ready to retire I will have enough to get started. 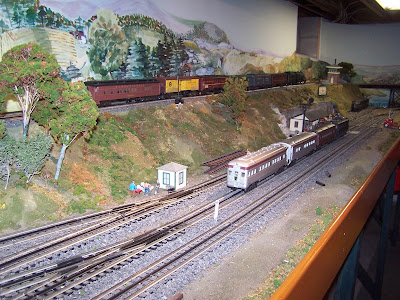 But what will happen to my D&H HO scale stuff? I don't know. Maybe I will keep the engines in a display case and sell the rest. Or keep both, but just build a small 4'x8' layout to run them on. And, like everything else, my fancies change over time. So, I may file this track plan away for another 15 years only to dig it out again and dream. But dreams are fun, and I like fun.

Posted by DandHColonieMain at 6:29 AM