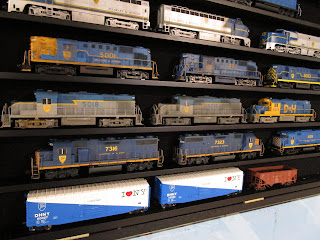 Finally, after what seems like an eternity my three RS-36 engines have come back! Actually, it wasn't that long that they were gone but ever since I installed my display cases I wanted ALL of my D&H engines together at once to see what they would look like. As it turns out, I really enjoy just staring at them. Pierre at Elgin Car Shops did a great job of weathering them exactly how I wanted. I sent him pictures and descriptions of each of the three RS-36 engines and he masterfully made them look like old, hard working Alcos (are there any other types?) And they aren't all the same either, as each one is different. 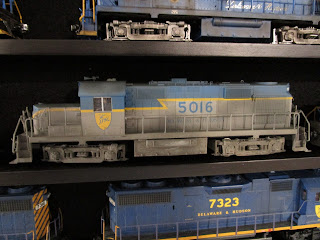 What's more, these started off as Atlas Trainman line engines so they didn't have details such as separate grab irons, lifting eyes, and antennas. I purchased Bowser / Cal Scale detail kits (190-527) and he installed them at the same time. I am especially happy with the treatment of #5016. The D&H had small "Delaware & Hudson" lettering on the sides of the hoods but then patched over it with gray paint and stenciled on large numbers. They didn't wash the engine before doing this, so as the engines continue to get dirty you could tell where the newer paint was starting to get dirty and the older paint was really bad. He captured it well. 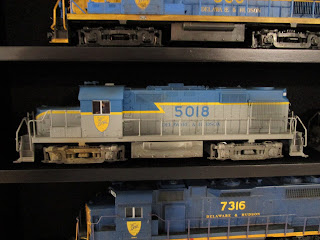 While nearly all of the D&H engines got dirty over time, the most obvious change was that their gray "lightning stripe" scheme would transition from light gray to filthy dark gray. Oil and grease would accumulate along the door ways, and start to creep up the sides of the doors. Each engine was different, but most had a similar change in appearance. However, while reviewing pictures of #5018 from 1984 I noticed that there was a lot more brown dirt and mud along the trucks and fuel tank than other engines. I don't know why, but here was a chance to open up the color palate a bit. Again, Pierre did a great job in showing this off. The large numbers also had been blanked off, but like the prototype this wasn't as stark a contrast as with #5016. 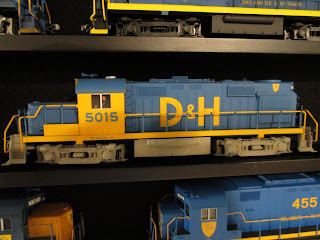 Finally, I didn't know what to do with #5015.As was mentioned here, this engine went through three different paint schemes in three years. By 1984 it ended up in solid blue with a yellow nose. But, I couldn't resist purchasing this limited edition Atlas model of the engine in the experimental "Billboard" scheme. Some pictures I found from the mid-1970s showed it lightly weathered but also with a lot of dirt on the cab (again, not what D&H engines typically had) so I went with that. It doesn't fit my layout anyway, so I didn't have to match it to 1984. I won't pull it out often to run, but when I do it will make a nice change of pace. And I am glad they didn't do more engines like this!

So did I actually get a picture with all the engines together? Nope, I cropped out a couple by mistake. And my two recent RS-11 acquisitions (#5003, 5005) are already on their way to Pierre for his special treatment, so a full family portrait will just have to wait!
Posted by DandHColonieMain at 7:10 AM