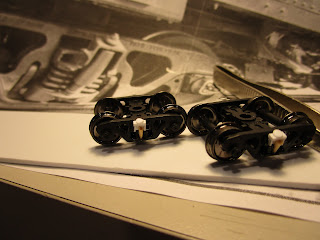 Due to a problem with an EBay seller, it took forever for my black paint that I ordered to get here. During the waiting, I started two other milk car projects in two different scales. As if I need more projects... oy! At the same time, there was one last mini-detailing job that had to be done on this car. The trucks on these cars when originally built had extra-large springs mounted on the outside of the ends of the bolsters. To replicate it, I tried steel wire, brass rod, and styrene rod, but nothing worked as well as chopped up pieces of toothpick. I drilled holes in the truck sideframe and wedged the pointed part of the toothpick in, and secured it with superglue. Extra bits of styrene c-channel, strip, and rod completed the fabrication. The background is another of Warren Dodgson's prototype pictures. 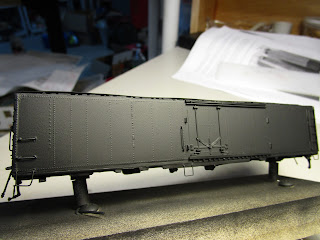 When it comes to painting, I know all of the hobby magazines say that you should wash your model with soap and water first to remove hand oils and other stuff. It is good advice, and I normally do that. Here, though, I was afraid that subjecting the car to water (much less scrubbing with soap and a brush) would remove all the rivet decals I had painstakingly applied. So, after applying all of the rivets I lightly sprayed them with Glosscote. I wasn't sure how this would affect the final painting process, if at all. Thankfully, it didn't seem to have a major impact on the final result.

The RMC article said that the cars were painted Pullman Green with white lettering, except for the light blue "M" in the insignia. That might be true, but all pictures I have seen of the cars in original service, MOW service, and restored show it as black, not green. So I painted my car Testors flat black out of a rattle can. I avoided gloss black because it always goes on too thick thick and and hides all the details. I sprayed several light coats of flat black and then some Glosscote for decals. I saw no fingerprints or oily smudges under the paint, which was good news. And it was at this moment that I realized I had never installed the roofwalk corner platforms and grab irons. So, after bending up some 0.015" and 0.010" wire they were attached. I just wish I had thought of it sooner! 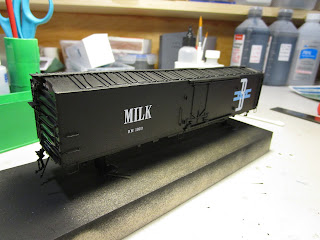 Then, I decaled the car with a set from Highball Graphics (set #F-191). The decals went on really easily, though because of the large surface area I was dealing with I tried to trim them as close as possible to remove any excess film. And I gotta say, just seeing the "B&M" insignia and the word "Milk" go on the car gave me a tremendous amount of satisfaction. Naturally, it wouldn't be one of my projects if something didn't go wrong: in this case, the first B&M insignia tore on me while trying to slide it into position. Also, to form the numbers 1920 I had to use a "192" and add a "0" at the end. The car ends with their tiny words were decaled based on the drawings. Then, everything was sealed with Dullcote.

I really struggled with how I wanted to weather this car. Nearly all of the pictures I have of the cars show that after a few years the white paint used would run down the sides from the large "B" and the word "Milk". The white over the black looks blue, nearly the shade of the "M". I don't know why it does that. The cars don't show much rust at all... just that "spilled milk" paint effects. If it were a commercial car I would attempt that by sanding down on the decals, but I am not attempting that weathering on my scratchbuilt car! If I messed up, I would be crying over spilled milk... so I drybrushed brown around the underside and along some of the edges and called it good. 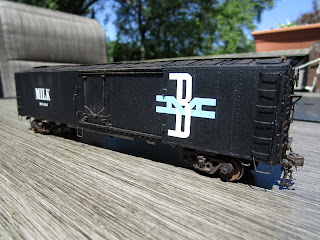 And finally, my finished car... and I am very pleased with it. It took me slightly longer than two months to build, but its quick pace was benefited by the opportunity to work from home because of the recent pandemic. It has taught me a lot, and I am glad to have a car that isn't otherwise commercially available except for a brass import (and, based on the pictures of the models I have seen, aren't prototypically correct anyway). Also, per the NMRA MMR rules, one of my 8 cars had to be a "Passenger Car" and that includes express reefers, of which milk cars are one example. So that is pretty cool too. 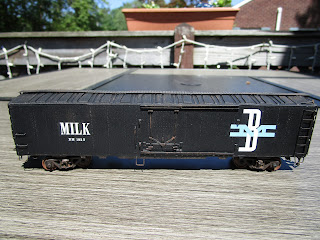 That makes four of the eight cars done. I don't know if all four will earn the necessary 87.5 points for judging but there isn't much else I could have done to these cars to claim "scratchbuilt." I certainly couldn't have built them much better... I know my own limitations. That being said, if the NMRA convention is still held in Boston in October I will be bringing my models for judging. Of the other four models, some or all will be scratchbuilt too so out of all of them hopefully at least 4 will qualify.

Posted by DandHColonieMain at 8:45 AM