I like challenges. Even as I was finishing up my B&M milk car I knew I wanted to get started on the next model. And a "butter dish" milk tank car required building a perfectly smooth body out of styrene over a wood former, something I hadn't done in the past. It sounded like an interesting challenge. Beyond that, it is just another frame scratchbuilding exercise. The April 2002 Railroad Model Craftsman had an construction article that made it sound simple. I chose to model the car with the sharp white body, blue frame, and black lettering paint scheme. (The March 2003 issue of RMC shows how to build them in N scale in the all-red or all-silver schemes).

A brief history of these cars: The Borden Company owned and operated creameries throughout upstate New York and New England. While milk originally was transported in metal cans covered with ice, later innovations saw railroad cars equipped with larger glass tanks to carry milk in bulk. One such design was this "butter dish" car, which was built by MDC (some sources say Borden itself) in 1935 (some sources say 1936), containing a pair of 6,000 gallon (some sources say 3,000) glass tanks. The nickname of butter dish is obvious. There were three different paint schemes, and the first cars had elaborate though unnecessary streamlining "fins" on the ends and top. The top ones were removed leaving just the end fins. One car survives and has been restored at the Illinois Railroad Museum.

Kits are available in multiple scales. For anyone looking for some advice on building the Funaro and Camerlengo resin HO kit of this car, I recommend you check out George Dutka's White River Division blog. A fun discussion about the trials and tribulations of putting together another HO kit for this car can be found at John Canfield's website. And for those who want to collect them in O scale, check this out.

I decided to start working on the body for two very important reasons. First, if I couldn't manage to come up with a reasonably realistic and smooth top portion there would be no reason to invest my energies into what is essentially a reefer chassis (having just built one for my B&M car, I didn't want to build another so soon). Second, it seems that anything I build in styrene will eventually warp. I was concerned that if I built the chassis first it would warp before the body was finished and attached to it. The body will brace it, I hope. 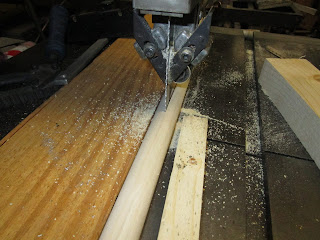 The magazine article called for cutting up a wooden 1" dowel and some pine on a table saw. While I do have access to one, I first attempted to do it on my chop saw and it didn't work great. I could get everything very close to the numbers, but it wasn't perfect. So, when I visited my friend's house I used his bandsaw to make quick work of it. The 1" dowel is sold in 48" long pieces and I cut about 12" in half (well, slightly to the side of half to account for the width of the blade) which gave me enough stock for two bodies' worth. If I mess both up, I have plenty of more dowel stock to try again. The base is just part of a regular 2x4". For those without access to these tools, Plastruct sells 1" diameter half-round acrylic rod (part AHR-32) that would work too. 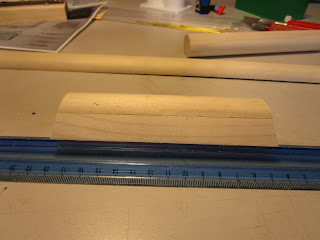 I then cut the ends at an angle. Using a protractor that I had in my desk (brand new too, as my old high school one was recently ruined in a spilled MEK accident... sigh) I measured the plans and found that the angles on the inside bottom ends of the cars were 75-degrees. Between the base of the angles, I had to have the body 5 + 5/16" long. So, I set my chop saw to cut at 15-degrees and had at it, making quick work of the angles. It is of course important to make sure to measure the intended length of the car from the bottom of the angled ends, that way it doesn't end up too short or too long. Mine came out just right. 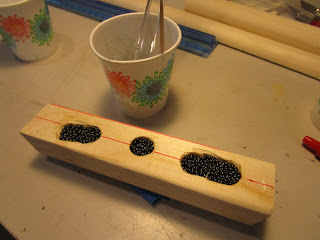 The milk tank assembly is essentially just lightweight wood, so it won't contribute much to the car's overall weight. One way around this is to drill holes in the bottom of the tank and hide weights inside. I used a 1/2" diameter drill bit in my drill press and made some openings in the bottom, leaving four solid wood areas around them that will accept screws to attach the tank to the flatcar base. I then mixed up a batch of epoxy, swirled in a bunch of lead shot, and carefully filled the holes. I made sure that no lead shot stuck up from the holes as that would prevent the tank from sitting flat. With the lead, the tank now weighed 2.5 ounces. 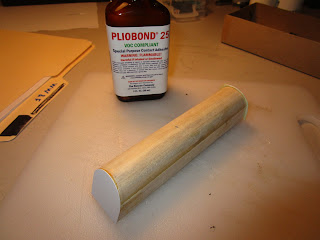 Following the article, I had to next glue some smooth styrene to the wooden former. The process is to attach the ends first, then sand them smooth at the edges, and then wrap another piece of styrene over the top. Sounds good in practice, at least. You are supposed to use contact cement to bond the styrene and wood. The article didn't call out a specific brand, and I have never used anything but rubber cement before, so I asked on the Model Railroader online forum for recommendations. They suggested Pliobond 25, so I bought a small bottle online. My first impressions with the stuff is that the bottle looks like it fell out of the 1950s and it smells horrible... like bad body odor... from the 1950s. It is strong enough to gag you! 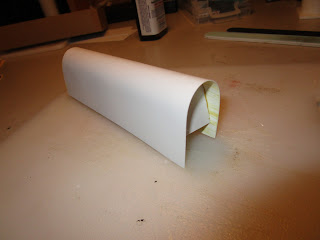 I roughly trimmed two pieces to go on the ends and then taped them down to the workbench so they wouldn't slide. A light coat of Pliobond went on the surface facing up. Per the instructions on the bottle, I also added two coats to the porous wooden ends of the former. Then, the ends were centered on the body and pushed on hard. I considered swirling it around face down on the workbench but figured it would get scratched. Then, I took an overly large piece of styrene and coated the entire side of it with more of the Pliobond stuff and when it was ready I draped it over the former and slowly worked flat one side, then the other. Then, there was a whole lot more pressing it flat. 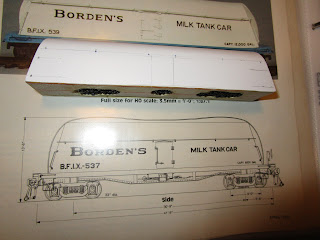 After that, I dribbled some MEK along the seams just for some insurance and let it cure. Next, I took a pair of fine scissors and trimmed away all of the excess styrene until I had about a 1/32" edge along all of the joints. My hobby knife very carefully removed even more material. I held the blade on its side on the end of the car and slowly spun the car in my hand. That way, any slip up wouldn't gouge the styrene. Finally, I used a couple of grades of "sanding sticks" (what men call nail files... and what they were listed under on EBay) to clean up the edges until they were perfect. I laid down another layer of MEK in the joints and set it aside, knowing that I had just completed what I think will be the hardest part of the car. 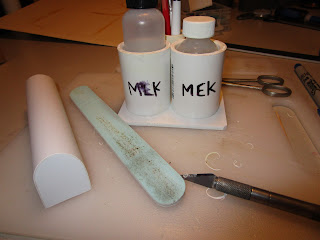 Working upstairs because the Pliobond fumes were so noxious, I then laid out the locations of the corner grab irons, handrail stanchions, and the door. Instead of using marker, I chose pencil for this car as it will be painted bright white and the lead will wash off easier than the ink. The holes were all drilled #71 to start (which is 0.0260" and just perfect for the 0.015" wire I use) though I will open up the stanchion holes once the castings arrive. I also used the back of a knife to scribe the door into the styrene. And that is where the project had to sit because I need the handrail stanchions and had to order them online. I also am working with a company to custom make the necessary decals. It has been a fun project so far.
Posted by DandHColonieMain at 1:25 PM