I swear this wasn't what I had planned! I was hoping to be done with my two other cars that are currently under construction and then I would jump onto car #7, a "unique" American prototype freight car. But, some research material I had ordered for it got stuck in the mail so I had to wait. And, during that time I talked with my friend Irwin. He is the president of the local NMRA Division, and we have a lot of common interests. One big one is that we both love British trains. He is my "supplier" of British railway modeling magazines. He is also working on several MMR certificates. And when I was telling him about my freight cars under construction he made the off-hand comment "Why not anything in OO scale?" And that question resonated with me.

I hadn't thought about making a model of a British train, though I had in the past built many scratchbuilt models of G-scale British trains to run in the garden. They were fun, but I had just glossed over them for the MMR program. In fact, as a fall-back plant I had a Welsh Talyllyn Railway coach drawing set that I was going to use for the Passenger Car requirement if necessary because it was a simple design. But, that was pushed aside. So what to do? I considered Talyllyn Railway slate wagons, and then Isle of Man fish wagons. But finally I thought about a Great Western Railway wagon. Built in OO gauge (1:76 scale), they run on HO scale track but appear slightly larger. However, because their prototype trains are so small to begin with they don't look too out of place.

A brief history of GWR cattle wagons: the railway had three sizes (small, medium, and large) which first entered service in 1888 and some lasted until the 1960s. After 1902, many were converted to vacuum brakes and oil type axle boxes and were given the designation W5. After a while, the GWR realized that three sizes of wagons was silly so they standardized on the long one (18 feet long) but it had internal dividers that could be set up to reduce the amount of space inside. Apparently this is necessary to keep the cattle tightly packed in, or else jolts in the train while running could injure the cows. Screw couplings and vacuum brakes were often fitted to cattle wagons to allow them to run in passenger trains and express goods trains. The design was so successful that it was later adopted by British Railways as their standard cattle wagon. 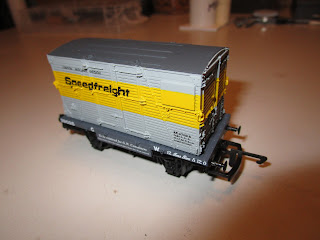 While the British love to build trains in crazy scales (OO scale, EM scale, P4 scale, 4mm, etc.) finding scratchbuilding parts on short notice isn't easy for an American modeler. Like axlebox castings. I have reached out to several companies and none have gotten back to me. I could buy a full wagon kit for just the axleboxes but that seems crazy. So, I asked Irwin if he had a spare wagon to sell that I could cut up for the axlebox castings and he agreed. So on Tuesday I paid him a visit and picked it up. Behold... the beginning of my cattle wagon! As it turns out, it had molded on brake levers that aren't prototypical and so I couldn't use the axleboxes as is. I may have to scratchbuild some. I have done it before... it isn't tough. I did keep the sprung buffers, though. Everything else was set aside. 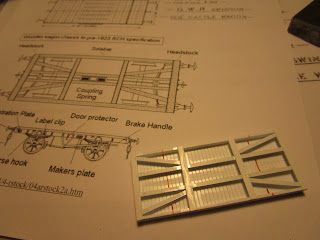 Looking online for for plans, I was generously sent the works drawings shown in the lead picture. But that didn't show the underframe, so more research was necessary. I found that the wagons were an interesting fabrication of steel c-channels and I-beams, all topped with a wooden deck. This I replicated in miniature using O-scale freight car siding laminated back to back and Evergreen 1/8" tall I-beams (#274) and C-channel (#264). Some additional styrene strips were added to tie it all together, as well as frame out the edges. One thing is for sure, though... this car is tiny! It is less than 3" long, and this was the "long" version! 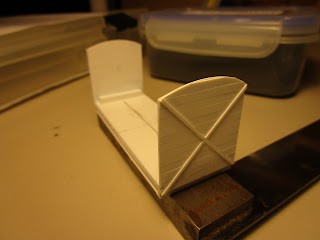 The sides can't be built using my normal methods of an inner substructure with laminated boards, because it is a cattle wagon and there are openings on the sides. So I started on the ends instead. These were cut to rough size and then laminated with horizontal boards, which were later trimmed. I selected this GWR prototype in particular because it had an interesting pattern of "X" bracing on the ends. This picture doesn't show it finished yet because the two vertical L-angles need to be added. But, it is coming along. They were then attached to the car frame and braced on the inside with a piece of styrene. 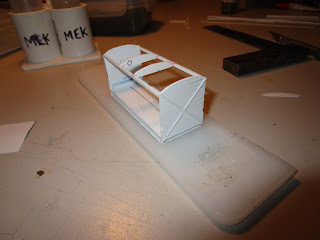 The tops of the car sides threatened to bow in so something had to be done about that. Per the plans, horizontal stringers of 0.060" square styrene were added tying the ends together. Next, I added roof supports which were rounded and notched to perfectly match the curved profile of the ends. And then I had a crazy revelation... I just built a car in the wrong order AGAIN! I don't plan to superdetail it but I am going to add cattle and straw. If I glue on the roof, I won't have access to the interior after painting. So, I can't attach the roof until after painting, which is really tough with styrene. I might have to roll my own roof out of metal, which can holds its shape. It will be a new challenge. Success... TBD! 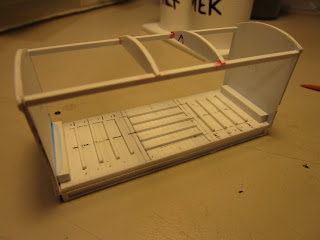 Next I added some of the boards on the floor that allowed the GWR to adjust the length of the car into something smaller if necessary. I don't exactly know how it worked, as it didn't appear from the plans that the ends came in, but there must have been some temporary walls or something that shifted closer together and locked into the upstanding boards on the floor to reduce the size. Or perhaps these boards were just to give the feet of the cattle some purchase in the shifting wagon as the train jolted along, and the size reduction boards were something else entirely. Who knows? And once the car is painted you probably won't be able to see them anyway under the straw. 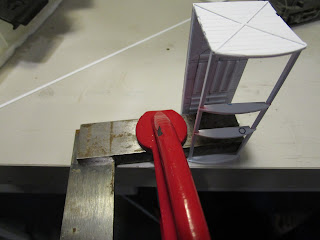 I had noticed that overnight the ends of the car had started to bow out in the middle. The tops were securely attached by the square stringers, and the bottoms were braced to the frame, but the middle portion had no support. The missing sides of the car don't go up the whole way, so they wouldn't be of great help. I considered gluing a vertical brace on the inside of the car but one of the size required would be visible through the open top of the car. I hadn't planked the inside of the ends yet, so I did that and then I set my metal machinist's square inside the car (it just barely fit... what an amazing coincidence!) and then clamped the square to my work bench. It will now dry flat. 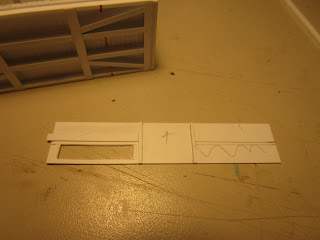 The sides of the cars have horizontal planking boards, but unlike American stock cars there aren't spaces between them. Instead, the three lower boards are profiled a bit to remove some material to allow a bit of air to enter. I suspect it also made it easier to clean out the car after a day of hauling livestock. Yuck! The result was that sometimes hay would stick out of the gaps, and interesting feature that I wanted to model. But I needed the sides to be strong too. So, I took some 0.020" styrene and laid out each side, but cut away a portion where the slats would go so that there would be open space in those areas. It didn't have to be perfect. 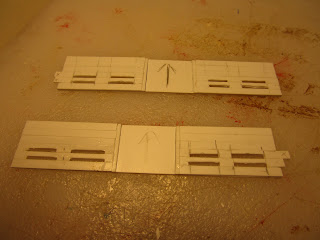 Then, I started adding the horizontal boards to the sides. For the lower three boards on each side of the doorway I trimmed away two areas and then glued the board on. The result was the open space I was looking for. The boards themselves are barely an 1/8" wide (or tall) and trimming the parts out resulted in kinked and bent boards. I glued them up and let it all become very solid, but not every opening is exact. I will later come in with a needle file and try and profile the openings more. I also didn't open up the lower boards on each side as that would just make the entire bottom area too weak. Still, I think it is a neat detail. 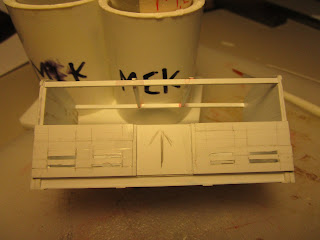 Finally, the sides of the car were glued to the body core that had slowly been forming on my workbench. The joints on the bottom and ends were pretty solid, but there was nothing supporting the middle from bowing in and out. I added some more 0.060" square styrene to frame out the doorways and tie the sides to the roof horizontal braces. There is still a lot more to do, such as building the unusual folding door assembly and adding trim and angle-irons to the corners, but the styrene L-angles are on order (my local hobby store didn't have any suitable ones) and I want to give the joints more time to dry. Plus, I need to start working on the axlebox assemblies.

There are two ways to do things, "The Great Western way or the wrong way." I hope I am in the first camp!
Posted by DandHColonieMain at 8:21 AM