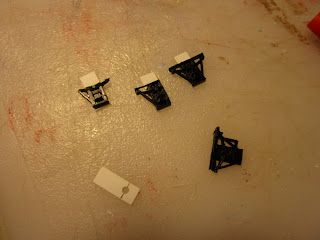 I assumed the next part would be easy. Take the Bachmann axlebox castings that I had salvaged from the car I had started with, patch them up with some styrene strips to repair the broken bits, mount them to the underframe of the car, and be on my way. However, several factors conspired together to make this impossible to do. First, the plastic that Bachmann used is impervious to MEK and I had to use superglue to bond it. Since at least one side's axleboxes would need to be glued in place while also supporting the wheel assembly itself (they were too fragile to spread apart and add the wheels later), I couldn't risk gluing the wheel solid. 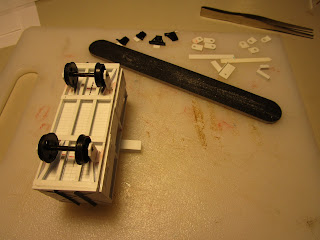 So, I tried building a cradle of sorts out of styrene pieces, I-beams, C-channels, and everything else under the sun. They had to securely hold the wheels while also allowing them to rotate properly. However, nothing looked even remotely prototypical and I was hoping to include at least some underframe detail. Interestingly enough, even some of the superdetailed O scale kits I have seen online for these cars cheat and use an inverted "C" cradle to hold the wheels too. The picture at right shows my first four sets of axleboxes, including one attached to the car. But, the second and third problem kept rearing its ugly head: the flanges were too large and hitting the diagonal crossbraces I added. 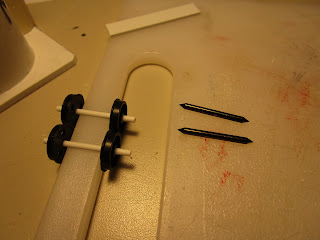 To remedy this, I elected to cut away portions of the offending diagonal bracing and turn down the wheel flanges on my belt sander. As it is, the wheels now have only a small flange but they still do run on track. I wouldn't trust these cars on my HO layout but these "fine scale" wheels do look a bit better. But I was left with a fourth problem: the axles were metal and any styrene bearing supports I made had to have conical holes drilled in them for the ends of the axles to ride in. In O scale this was easy for my bobber caboose, but not so much in OO scale where minute differences in axlebox depth could make the axles run skewed. So, I removed the wheels from the axles and mounted them on new ones made from 0.080" styrene rod. 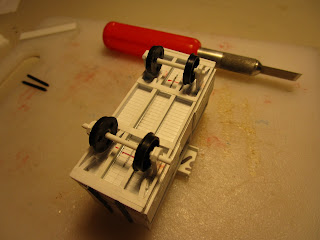 After this, things got a little easier. I was able to make styrene bearings for the axles that held the wheels in the proper alignment and also allowed me to set the wheels at the proper height relative to the rest of the car. The flanges just barely cleared the diagonal bracing (or where it would have been had I not hacked it out). However, just to be sure I took the car around the house with me and rotated the wheels every couple of minutes to make sure that the wheels weren't being glued to the bearings, and also to make sure the flanges weren't hitting anything. The picture shows one axle trimmed roughly to length and the other left long. 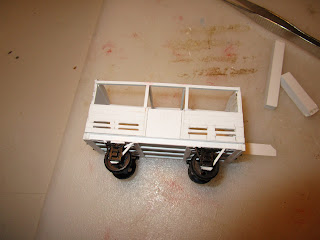 Finally, I carefully trimmed all the axle ends to length and then superglued the black Bachmann plastic axlebox castings onto the styrene bearings I had made. Since some of the axlebox pieces had broken during extraction, I had to replace those parts with white styrene. Again, superglue and MEK were used. I won't claim that they are perfect, but I am content with them. All told, it took eight different attempts to attach the wheels and axleboxes to the chassis. Having to hold one sides' axleboxes and wheel assembly in place while the glue set was annoying but in the end it worked. There will not be a second car in the future built this way though! 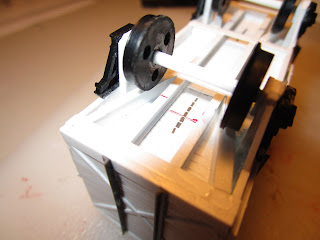 Finally, the missing crossbraces were bugging me. A lot. I had spent a lot of time adding them, and even more time trying to figure out ways to keep them with the wheels as they were, but in the end I had to cut them. But now that the wheels were running true and the flanges were clearing them I wanted to rebuild them. There was no easy way to get pieces of angle into position because the bases of the angles were still lumped on the floor. I hadn't been able to perfectly chisel them off. So, instead I used super thin (.010") pieces of styrene to first bridge the gap on top and then on the sides, essentially filling in the missing pieces. I think it looks a lot better now. 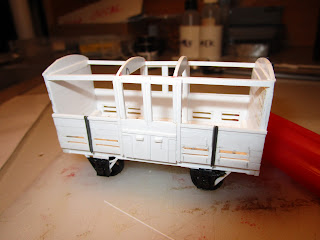 I moo-ved on to detailing the sides of the car. I added some vertical angle iron per the prototype, and also added the doors and hardware. The GWR believed in redundancy and nearly every piece had a back-up piece in case something failed. As a result, it is all way more complicated than it should be. Still, I did my best add the lower portion of the doors which fold down and the upper portions of the doors which swing to the sides. Why couldn't they just build it simple with sliding doors, or bi-folding doors, or something? An interesting project trying to find bits and pieces to replicate all of the little things that make the car so complicated. 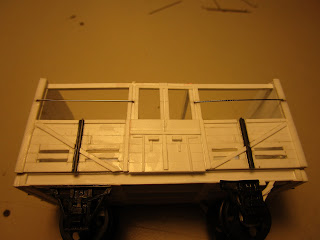 Next, I began final framing of the car. The four corners each received vertical L-angle (0.080") and in places I had to back-fill with styrene. Then, the lower corners received their diagonal bracing. There were horizontal steel bars across the open ends (were the cows so inclined to jump out that they had to be restrained?) and they were added with stainless steel wire. Finally, the upper edges of the car were framed out with more square styrene in preparation for the roof. After taking this picture I realized that I needed to trim the lower edge of the left diagonal brace... actually, my wife pointed that out. Taking pictures while building models is a useful trick. 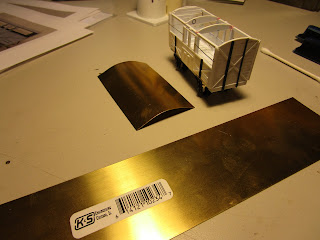 As noted earlier, I want to add some cattle to this car and it won't be easy with the wire rods and the roof in place. So, I had to plan ahead. But I didn't do a good job of it because I attached the sides to the base, which means the roof has to go on last. It is foreseeable that I could bend a thin roof from styrene and hold it down while the glue dries after the car is painted and loaded with cows, but that seems finicky. Much better would be a metal roof that will hold its bent shape which I can paint and then attach with glue and leave it to cure on its own without having to press it down. So, I went to the hobby store and picked up some 0.015" thick sheet brass. 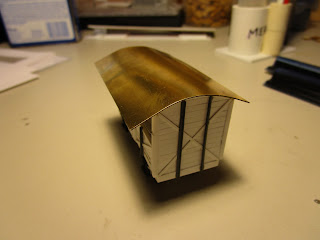 I am blessed to have friends with fully stocked machine shops, so bending brakes and rollers are at my disposal if I want. But, the metal I bought was thin enough that I was able to coax it into shape by slowly working it over from the inside out. I first cut a piece roughly to the dimensions I needed (leaving lots of overhang on the sides, because getting a smooth curve is toughest on the edges) and then I bent it by hand. Once it looked good, I trimmed the ends and sides with a pair of scissors and then I took it over to my belt sander to finish up the work. I also gently rounded over the corners so that they wouldn't cut anyone. And with that, I assumed the top of the car was done. 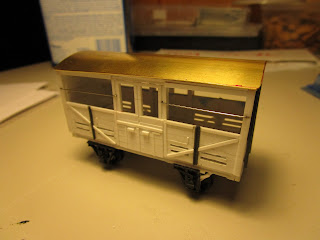 While showing my wife what I had built, she innocently asked if I would build more to which I responded "No, I would rather buy them!" This was not the correct answer apparently, but I had so much trouble with the wheels and axles that I decided I won't build more 2-axle cars unless I can find commercial axleboxes. As it is, the wheels roll but not perfectly and my wife pointed this out too (she is good at things like this, bless her heart). So, I ordered some more wheels and probably will have a go at rebuilding the rolling parts of the chassis for a ninth time. I also have to add brakes, buffers, and couplings.

And I will leave you with this thought, brought to my attention by my father who occasionally follows my blog: "First a milk car. Then a "butter dish" car. Next a cattle wagon. Coincidence? (Holy cow!) I think not. Perhaps an ice cream car is in your future." Well, the TCDA car carried milk to an ice cream plant so I suppose that counts as an ice cream car. My last four cars have been centered on cows, and my final car definitely won't be!
Posted by DandHColonieMain at 6:36 AM