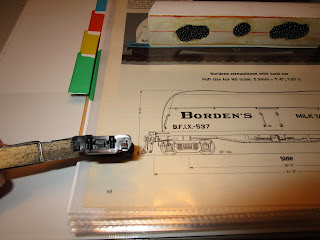 I started researching the frame in early 2019, over a year ago. The RMC article called for using a modified Accurail kit reefer frame, but I wanted to scratchbuild my car. So, starting last Saturday morning the first thing that I worked on was the trucks. They are nice but the details didn't match the plans. Specifically, they had molded on brake shoes and the profile around the sides and edges was too curved. So, I trimmed and filed them down to match the magazine drawing. It was only later that I realized that there were several errors with the drawing and these cars did have outside-hanging brakes on the trucks, so I should have left them molded on. Oh well. 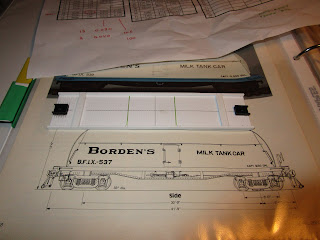 I have searched the internet high and low looking for plans for the underframe arrangement of these cars. To date, I have come up empty. People have referred me to regular reefer plans which are nice but I can't guarantee they are accurate. Several manufacturers have made kits of these cars and I reached out to them asking about plans but none responded. Maybe they thought I was going to make my own kits? The HO and N scale articles modify commercial frames but I wanted to build it all myself. So, I did the best thing in this situation: made logical guesses. I started off using some Evergreen O-scale freight car siding (#4067) with the board detail pointed down. I then framed it with styrene strips. Its dimensions match the plans. 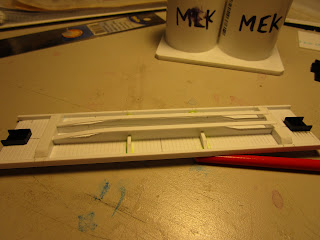 All of the cross braces, truck bolsters, and longitudinal braces were formed from styrene too. I would just set the piece in place and add some MEK. Within a little while, I had a nice solid joint. The prototypes two main beams had caps on the bottom surface (which faces up when the car is upside down) and I built them by first profiling the long beams, and then adding thin styrene strips on top. I had to glue them down in phases. Here, the picture shows the center portion glued down but the ends are still hanging up in space. I later glued them down and held them in position with wood toothpicks (which prevents my fingers from marring the softened plastic). 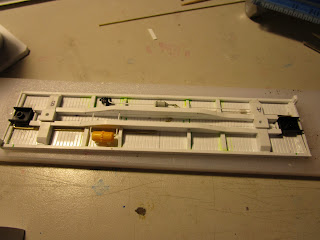 I then began adding the brake system. Using parts from my scrapbox, I cobbled together the necessary items and attached them to the frame. The first part was the copper rod steam line (this car did run in passenger trains, after all) which had to be cut and fit between every cross brace. Next, a Walthers tank (yellow), a MDC cylinder (gray), an Accurail triple valve (black), and sytrene rod connected all of the parts together. I held off adding the brake line and air hoses on the ends until after the car is painted because they are fragile. I don't claim that this brake system perfectly matches the prototype, but without underside photos I did the best I could. 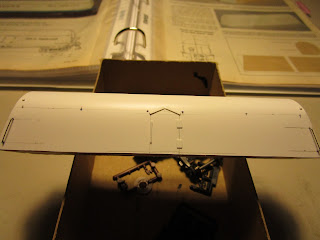 With all that done I turned my attention to the body. The sides of the car have doors that appear to be plug doors, with hinges on one side and a locking apparatus on the other. Originally the car had triangular hinges but over time they were replaced with the rectangular ones. Using some scrap styrene and few pieces from the parts box, I fabricated these details based on the pictures of the prototype. They also have angled drip rails above the doors which I guess serve to keep water from seeping into the car. Finally, the ends also had grab irons which bent around to the sides. Because the corners of my car are essentially hard right-angles, I mounted the handrails on the sides which look better. 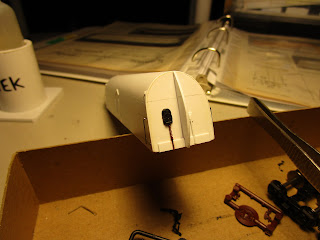 The ends were detailed in much the same way. The end ribs were cut from 0.030" styrene, making a template with one and then tracing and filing down two more to match each other perfectly. The bottoms of the ends have various steel patch plates (I don't know if they were there on the original cars or are repairs by the museum) but I modeled them with styrene. The ribs were notched to fit around it. The braking hardware is a Tichy brake wheel support and Precision Steel Co. plastic chain. The control box on the right side of the rib is just styrene bits. These details are on one end of the car only. The brake wheel was left off until after painting so it wouldn't get filled in with paint. 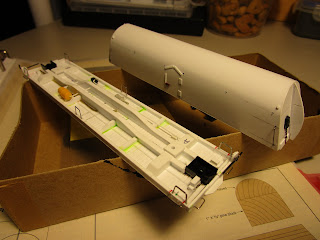 Finally, there was the matter of little things here and there. For example, the upper ends of the tank body had small little metal protrusions in the corners. I don't have a clue what they were for, but since the cars existed during the steam era if I had to guess it would be that they were designed to hold marker lamps in case they were the last car of the train. Small plastic bits replicated what exists on the prototype now. I also added eight grab irons and six stirrup steps to the frame. The corner stirrups are dangerously close to the trucks, and it limits their swing somewhat. They were omitted from the model in the article for this reason, but I added them. My car won't take 18" radius curves though, that's for sure. 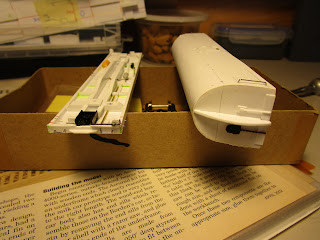 And now the frame is ready to be washed and painted. The shade of blue is a cross between baby blue and sky blue, and I am not sure what is available in a spray can at the hobby store. I won't be able to check it out until the weekend I think. So it will have to wait. The body is nearly done, but I still have to add the wrap-around handrails and for that I need the stanchions that are on order. Then, the body itself will be finished and ready for washing and painting with a nice, glossy white paint. And that is where I left the project on Sunday evening. All in all, it wasn't bad for a weekend's worth of work. I had a lot of fun building it, and I am sad that it is nearly done.
Posted by DandHColonieMain at 5:23 AM