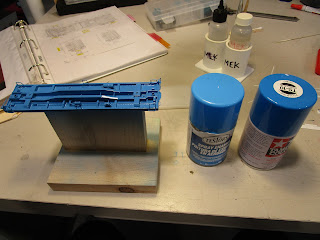 The body and frame were painted separately. For the frame, I washed and then primed the underside. I didn't need to cover every last speck of the car, but I wanted to hit the yellow and black brake detail parts and also the neon green marker residue at some of the joints. The prototype as it sits in the Illinois Railroad Museum has a faded blue underframe and I first tried Testors Gloss "Light Blue" (#1208) to replicate this. It ended up much lighter than the spray can cap and I wasn't happy with the color (it looks faded.... which sadly matched the prototype). So I purchased some Tamiya "French Blue" (TS-10) and after several light coats it looked better. 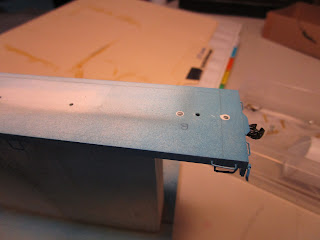 Then, before I painted the deck I had some work to do. First, I tapped 2-56 the truck and coupler screw holes which I had previously drilled. The truck screws will be hidden in the wood tank block but the coupler mounting screws holes might be visible (drilling and tapping through the frame seemed smarter than trying to drill and tap a shallow, blind hole). I screwed in the couplers from below, then filled the hole in from the top with putty and let it dry. After sanding smooth, I painted the deck the same light blue. The couplers are now firmly attached with screws, and the holes are hidden. Repeated removing of the screws might mess this up, though, so make sure of the proper coupler height before painting. 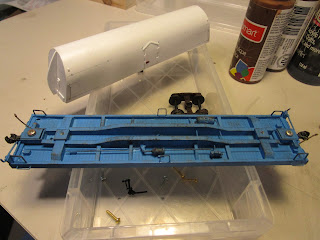 The deck was then flipped over and the car was given a light misting of Dullcote (after protecting the couplers with some blue tape). Then, I drybrushed various shades of brown and black to represent rust, dirt, and grime along the underside. I have no actual idea how bad the car looked underneath but there are three known facts: it is made of metal, it is stored outdoors, and it will only get worse over time. So, I lightly weathered it to reflect what would normally occur to all railroad cars that have to survive rainstorms, blizzards, and the like. If it is anything like the museum trains up here in NY, I should have really rusted it out. But I exercised restraint. 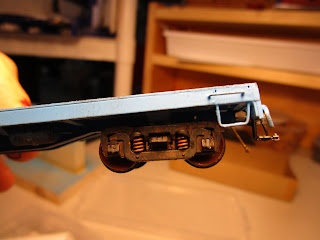 The trucks were drybrushed with brown and black around the edges, and the suspension springs were picked out in orange. I painted all surfaces of the wheels except the treads with black, and then went over them with a mottled black/brown paint mixture. Since the car is on display it most likely is getting covered with rust instead of oil and dirt from running along the rails, so I tried to reflect this. I think it came out pretty good. You can also see in this picture the Precision Scale Company glad hands and the Bowser/Cal Scale air and steam hose castings. They were painted and then lightly weathered as well. 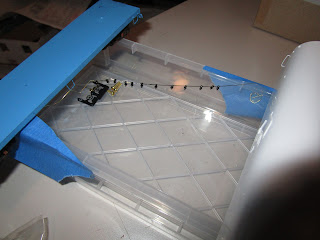 The handrail stanchions, which came from Precision Scale Co., are brass castings and super tiny. What's more, they come 12 to a package and I needed 12 exactly so there was no room for error. I strung them on some brass 0.010" wire I had lying around and made a bunch of twists on the ends so they wouldn't fall off. Then, I dunked them all in lacquer thinner to clean them. They were all handpainted with gloss black paint while still on the wire. I accidentally knocked one off the table when I cut the end of the wire to free them, and I thought I was going to be sick. Thankfully, it landed in a space where I was able to find it. Otherwise, I would have had to order more. 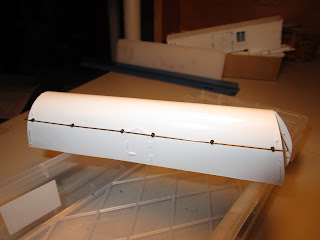 The body was prepped for painting, but I didn't dare get the car too wet because I was concerned the wood might swell and blow off the styrene! But, it got a good wipe down with a damp paper towel. Then, I sprayed it gloss while. I used a Krylon white spray paint in a large can. The next day, I added the handrails one side at a time. I don't know if the prototype is one large piece or two- one per side- but the stanchions are too small to hold two ends of wire, one from either side. So, the end fins had a second hole drilled and the wires overlap those two holes on the ends. Gluing the stanchions with superglue wasn't too bad because they were captive on the handrail wire and couldn't "escape" very far. 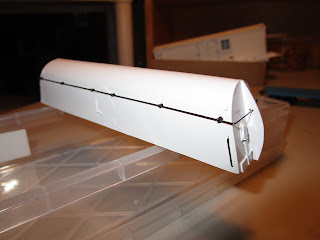 I then went around the car and touched up the black paint. The stanchions had been pre-painted (thank goodness, as there is no way to paint them properly without touching the white by mistake) but the handrails between them were painted the same gloss black. Where the handrails pass through the fins and terminate, I left that part black. It is less noticeable that there are two wires instead of one if they are dull brass going into white, instead of bold black going into white. At least I think so. I wish I had a better solution. The corner grabs were also painted black, but I didn't worry about getting every last bit that went into the body because I didn't want any black paint showing on the white body. From a foot or so away, you can't tell.

And this is where I am at. I am letting everything dry, and then the body will be screwed to the frame with some small #1 x 3/8" wood screws. Then it is just wait for the decals to arrive.
Posted by DandHColonieMain at 1:31 PM