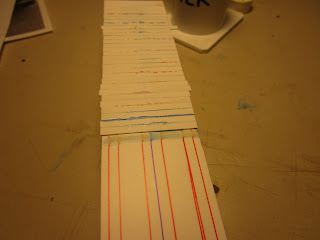 The floor of the car is just a piece of 0.060" styrene, cut to drop into the bottom of the car and perfectly rest on the styrene pieces I had attached to the lower walls earlier. The prototype car was planked so because the bottom would be visible I added an extra layer of wooden "boards" (the same Evergreen #126 stryene strips I had used earlier) as well. Those red and blue lines represent where the six longitudinal frame members would go, and I had originally planned to glue them directly to the floor before I remembered that the car should have boards showing. At least I caught that mistake in time, or I would have had to cut/fit boards between each member... ugh! 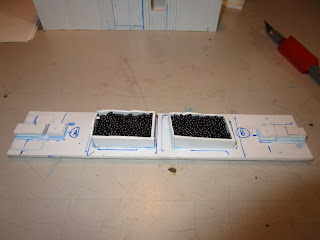 The floor was then flipped over and I added styrene pads which will later be drilled and tapped for coupler and truck mounting screws. I usually drill the holes before painting but leave the tapping until after, because I don't want paint to get into the threads and fill them in. I also use the holes for mounting the car on pieces of wire to support it while painting, and the wire could mangle the fragile plastic threads. But, drilling the holes is definitely better now than after painting. I also added several ounces of weight in the form of epoxy mixed with lead shot. Not too much, though, as Forney's are known for their anemic pulling power!

I started working on the frame but couldn't go any farther with it until I know how much clearance the trucks would need, and how tall the bolsters would be on them. So, I ordered the NWSL metal On2 wheels. The emailed me recently to say that unfortunately, due to the pandemic they are back-ordered for months. Then, yesterday I received an email that they were shipped! So, we shall see how that plays out but for now I can only focus on the body of the car for now. 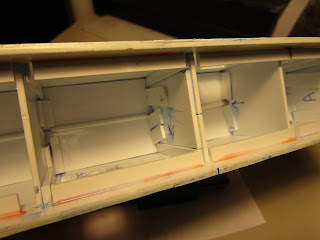 The roof is two layers of 0.040" styrene. The first layer went on okay and there was no bowing or warping, but the roofline joint wasn't nearly as straight as it needed to be. So, I added a second layer which made the roof pretty strong. In real life, the was constructed from boards that ran perpendicular to the track. I thought about adding them, but then realized that they would be hidden under the final "tin" layer of the roof. It wasn't worth going to the trouble of adding them when they wouldn't be seen. The roof joint was further reinforced below with styrene rod running along the seam. 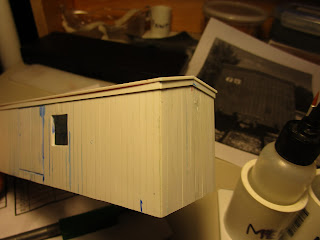 I then left everything dry and flipped it over, and was a little dismayed to learn that one edge of the roof was just slightly too short. Thankfully, with plastic styrene and MEK there is very little you cannot fix! So, digging into my styrene strip pile I quickly built up a couple of layers and then let it all dry. Once trimmed, the roof was perfectly flat, level, and overhanging evenly on all sides. At this point, I went around the car and added some Evergreen #125 strips along the lower portions of the overhanging roof. It really made the car look classy, and it helped to cover up any rough edge joints at the same time. I wonder if it served the same purpose on the full-size cars? 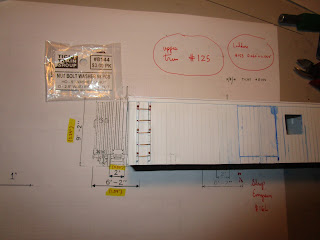 The ladders on the prototype car are interesting, and almost look childish compared to modern ladders. They are made up of vertical, square profile wooden boards with metal rungs bolted across them. I wonder how strong they were in real life? I remember reading that the museum installed extra wood behind the ladders to give the bolts some additional "meat" to go through for strength. I used Evergreen #153 square stock for the vertical risers, and some Tichy #8144 nut/bolt/washer castings for the mounting hardware. The rungs are bent from straight wire, which was conveniently stored in a stapler on my desk! Just some bending up and they were at 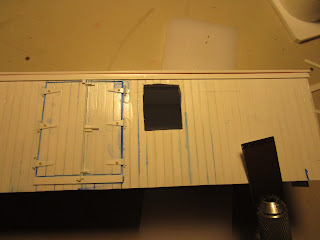 The sides were then detailed. When building my large scale (1/3) steam locomotive, I take a chunk of metal and mill/turn/drill away unnecessary parts until all that is left looks like a train part. When working with styrene, I add bits and pieces here and there until what I have left looks like a train part. The doors had already been roughed in but they needed hinges. Small pieces of rod formed the barrel part of the hinge, and then two other pieces formed the rest of it. A small Grandt Line N/B/W casting (#127) finished it off. But I had to make 12 of them! For consistency, I cut and attached all of one piece and then moved on to the next. Other door hardware like the locks and handles were more styrene. 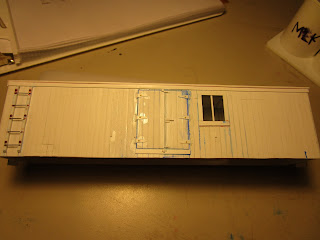 I am thankful that I have such a good selection of styrene to work with. In the old days, I might have one thickness of sheet and a couple types of strips and I would need to slice and rip and sand that down to make whatever I needed. By now, my inventory is such that I can make almost whatever I need with what I have. I discovered that the plans published in a book for this car don't match the replica car I am modeling in a couple of respects, including window height. I crudely opened it up (shown in the last photo) and framed it with more styrene. I will hold off glazing them with real glass until after the car is painted. 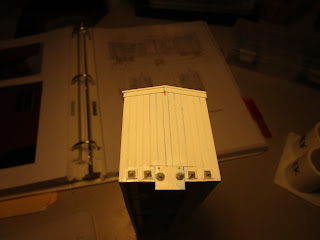 The ends of the replica car are simple but have various nuts, bolts and washers along the bottom to tie the ends and the longitudinal beams together, as well as support the coupler box. Without them, the end of the car is pretty plain. And while I have a good selection of styrene, I needed to either purchase or several types of n/b/w castings. I chose to purchase them from San Juan Details (formerly Grandt Line). There are three types pictures: small (#127), with square washers (164) and with round washers (16). The coupler pocked will be cut out later when I receive the trucks and set the final height of the car. 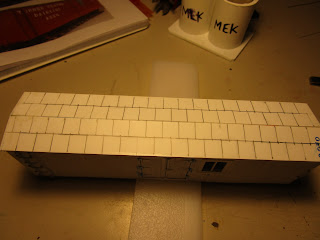 Per the Maine On2 FAQ website these were later covered with tin panels that were soldered up. Some cars, either late in life or as part of their later careers in museums, received tar paper. I am going to simulate a tin roof, which per prototype pictures wasn't perfect. Some people model it by embossing aluminum foil, and others overlay rectangles cut from thin styrene. One gentleman used thin (.010" x 0.020"... the smallest Evergreen sells) to replicate the folded over seams in the tin roof panels, and then sanded down the styrene so it was barely visible. I decided to try that. I first laid out a grid in pencil on the roof, and found that 1 centimeter was nearly the exact width of the tin panels. A shingle pattern was drawn out, though certainly the lines didn't have to be perfect. 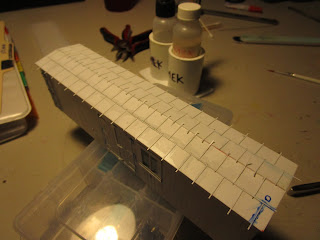 Then, I used some Evergreen 0.010 x 0.020" styrene (#100) to replicate the standing soldered seams. This stuff is the smallest dimensional styrene strip that Evergreen makes and boy is it tiny. And it isn't perfectly straight either. As a result, I had to do each joint a little at a time whilst trying to hold it in place and then gently touching a brush with MEK onto the piece. Any little bit of extra force and it would go off course, leading to problems. I started by doing the two longitudinal pieces, and then added the perpendicular pieces. In the background I had on an old PBS "Nova" show about the building of the pyramids. That sounded about as tedious. 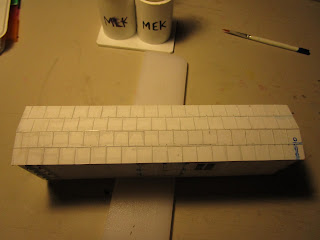 After a while it was all cured, so I took a knife and went around the edges to trim everything up. Next, the center roof joint was addressed. At first I planned to hide it under a roof walkway, but further research revealed that the replica car doesn't have them yet (perhaps to keep tourists off the car when it is on display.) So, I had to clean up the top joint. I squared up the upper ends and then pieced in more of the styrene to make a joint rail at the peak. Finally, I went over each joint of the roof again with some MEK to make sure that they were all in fact set up. While it sure looks strange, soldered tin roofing was common on 2-foot cars.

It is important to point out that several things are missing from this car that might be on a traditional operating car. First, there are no brakes on the model. Some WW&F boxcars had no brakes, some had handbrakes installed on only one truck, and some had no brakes themselves but did have vacuum brake lines to connect the engine with trailing coaches. Since the replica is sans brakes, my model is too. Nor does it have the roof details like a roof walk, as mentioned above. Finally, it is missing corner stirrup steps. Some WW&F boxcars didn't have them either though it looks like the original car #65 did. But, because it is usually on public display again the museum chose to leave them off. So is this a model of a real railroad car or a display piece? Both! While it is usually on display, the car does run on occasion on the railroad during photo charters (see some great photos here) and such and as a result I will stand by the fact that it is a money-making piece of railroad equipment.

I don't want to paint the car yet because there are plates by the coupler pockets that need to be trimmed for the couplers to gain swing clearance, and until I can set the coupler height (again, tied to the receipt of the On2 trucks) the car will remain white styrene. The decals are on order though.
Posted by DandHColonieMain at 4:46 AM