Scratchbuilding an On2 boxcar - Part 3 (Frame) 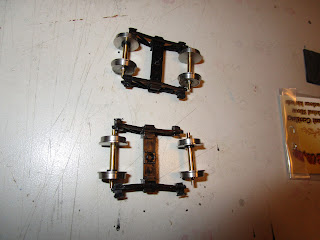 The wheels arrived from NorthWest Short Line, who makes them by hand to order. They were awesome. They were available as kits (which you must press together) or ready-to-run, and I selected the later option because I didn't want to screw them up. The trucks, on the other hand, were less than ideal. I ordered them from San Juan Details, and they were originally manufactured by Grandt Line. They were thin in cross section, a bit warped, overall very springy and riddled with stringy flash. I don't know if I got a bad batch or not but I talked with San Juan Details who agreed to replace them. It was disheartening to say the least because it causes the project to grind to a halt. 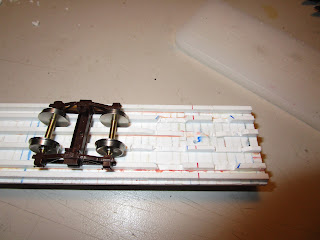 So, while waiting for replacements I started working on other projects. Several weeks later, I was pondering if I could do something to replicate the trucks on this car. Then, I looked in my parts inventory and found two pair of Grandt Line On2 trucks just sitting around! They had On30 wheels and I had bought them several years ago for projects that never came to fruition. But here they were, begging to be used. And they were perfectly straight and true. Nothing at all like the set I had above. The prototype car had notched longitudinal beams to allow the trucks to rotate without binding, and I notched my car's beams accordingly. It looks a bit drastic now, but you can't see it when the trucks are installed. 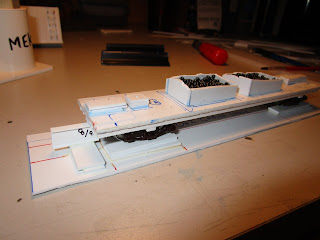 I then had to confirm if the couplers were going to end up at the right height. Per the Maine On2 FAQ if you have the underside of your car 0.375" from the top of the railhead and you mount the couplers in Kadee boxes the height will be perfect. There are several methods of measuring 3/8" from the rails but I built a quick styrene go/no go check gauge of sorts. It helped that I had tiny piece of 3/8" styrene I-beam in my scrap box. Once I set my car up on the gauge, I confirmed that the coupler mounting pad needed to come down about 0.040", which was easily accomplished with some styrene. 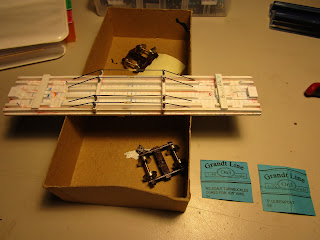 The prototype car has functional truss rods which tie the ends of the car together and help adjust the sag and bowing of the car as it ages. In my O scale parts box (which is slowly growing larger) I had some Grandt Line turnbuckles and queenposts that were purchased for my D&H caboose project. They were perfect for this car too. First, I had to glue two crossbraces to lower the queenposts sufficiently. The prototype car had these crossbraces too, and now I see why. Then, it was a matter of cutting and bending some 0.020" steel piano wire that I had on hand. I had to use special hardened cutters as this stuff is strong. Superglue attached it all together, though the ends of the rods just hang underneath the car (where they won't interfere with the trucks).

And with that, I was able to notch the ends of the car for the coupler shank and get everything ready for paint.

The moral of the story is: always check your scrap box for miscellaneous On2 trucks!

Posted by DandHColonieMain at 5:26 AM