I accomplished several things in 2020:

1.) I completed the requirements for my NMRA "Master Builder - Cars" certificate. I came into 2020 with the my first car, an O scale caboose, in pieces and two HO flatcars as warped frames. However, working from home gave me extra time during the day when I would normally be in the Office or commuting to get some work done on them. And, lunch time spent in the basement helped too. My original goal of completing "one car a year" quickly turned into "four cars before the convention" and then "all eight cars before the convention." And all earned enough merit award points (87.5), which was pretty cool. I only have three more certificates to go (Association Volunteer; Chief Dispatcher; Master Builder - Scenery) before I earn Master Model Railroader. 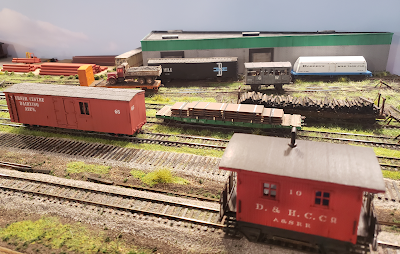 2.) This year I finally had a suspended ceiling installed over the layout area, and in fact over most of the basement. Because my trains were now safe from dirt and dust falling on them (and at times it was pretty substantial and just touching the ceiling joists would turn your hands black), I finally had the confidence to start building scenery without worrying that it would get damaged.
3.) I started building scenery on my primary layout. I haven't actively worked on adding scenery to my layout in likely 10 years. A lot of things were new to me, such as buying a static grass machine, playing with ground goop, and installing backdrops. But, I felt right at home using ground foam. So far, I have one scene mostly finished and another half-way done. There is still lots of detailing to do, and more structures to build, and more vehicles to add, and... 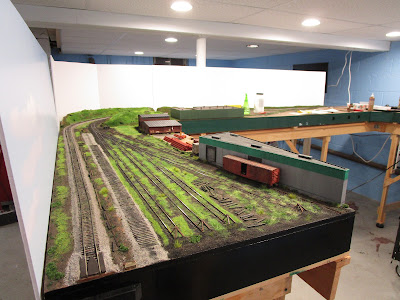 4.) On the 7.25" gauge (1/8 scale) railroad front, I wrote up an article for Live Steam and Outdoor Railroading magazine about my battery powered Boston & Maine "critter" engine and it was published in the Jan/Feb 2021 issue. While I enjoyed building the engine, and writing the article, I hope that it might inspire others who faced similar issues to what I dealt with while working on my engine. 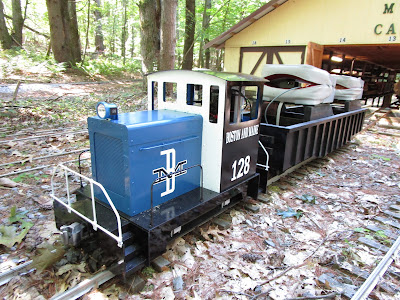 1.) Train Shows! True, the Amherst show in January is cancelled but it is unlikely that every show will be postponed in 2021. Specifically, I imagine that the Great Train Extravaganza in Albany will occur in December which is always a fun time.

2.) Train Rides: some tourist trains are already operating now with limited capacity. Because of my immune system I don't want to risk even partially-crowded trains, but if the vaccine receives widespread distribution in the next six months or so then perhaps by Fall I will be able to ride trains again. And perhaps the Arcade and Attica Railroad will have their #18 steam engine assembled and running at that time.

3.) Good Health: my Crohns disease is being managed very well through infusion treatments, and despite the Covid all around us I feel a whole lot better than I did in 2019. Yay for that!

4.) A new Gauge 1 live steam locomotive. I won't reveal the details now, but I have had an engine on order for 18 months now and hopefully it will be delivered in the spring.

5.) Eating Out: I normally don't like to eat out, as I would rather spend the money on trains. But, Covid has made it so that eating out is a rarity in our household. The ability to eat out again is something I am really looking forward too.

Posted by DandHColonieMain at 1:38 PM