Problems with a gummed up curved turnout

Nearly all of the track switches on my layout have been replaced at least once. I started with Micro Engineering #6 turnouts and swapped them for Peco #6 turnouts, which proved to be more durable. However, I have one curved Shinohara/Walthers #6.5 left-hand turnout at the entrance to the staging yard. And unfortunately, over the past few months the control rod that shifted the points became stuck. It ran through a brass tube from the Caboose Industries ground throw to the switch throw bar, but during the process of adding scenery and static grass to Cut Corner some glue and water had found its way into the tube. Many applications of oil on both ends of the tube didn't help. I could force the switch back and forth and it would work, but a week later would gum up again. It was a disaster.

Knowing that a fix might involve destroying the switch, I first set out to buy a replacement. And wouldn't you know... they are discontinued by Walthers. And no online store has them. Believe me, I spent a hectic couple of hours looking. But then I went to my local hobby store and they had several just sitting in a pile, brand new in their box, at a great price. Doh! I bought one immediately.

Next, I decided to see if I could trim the tube shorter on both ends (thus removing the glued-up bits) and run a new wire through it. A Dremel tool made quick work of it, but studying the old control rod revealed that rust and gunk had permeated at least 4 inches into the tube, which meant that no amount of oil I had been applying would ever have reached the problem area. And, I didn't dare reuse the rod. So, it was destined to remain in situ. 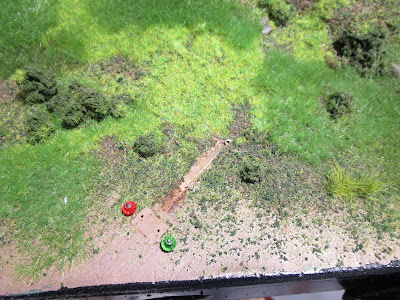 Unfortunately, the hill it passed through was pretty solidly built. It had a hard, ground goop shell that wasn't easily punctured soo running another tube wouldn't be easy. I first tried bending a tube around the hill but the angle that it approached the switch's throw rod was at an angle and that changed the length of the control rod's requirement distance to move the points. An HO scale ground throw wouldn't shift them enough, and an O scale one was way too much. 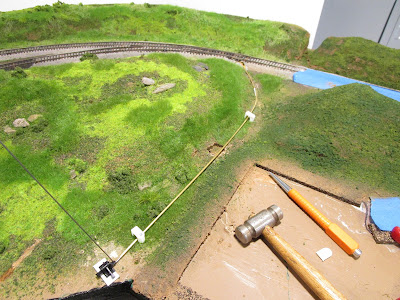 A second option I considered was drilling a hole through the hill with an extra-long drill bit, and a third plan was cutting a channel from the top which would later need to be patched. Neither sounded fun. So, in the end I remounted one of my Tortoise machines under the turnout.

I still have the brand new switch, which I will keep in case this one breaks. I had trimmed so much of the throw rod away on both sides that there wasn't an easy place to drill a hole for the control rod to connect to. That is a lesson for next time: always leave the throw rod long enough on both sides for emergencies.

Due to the location of cut corner, these repairs were easily reached by lifting away the lightweight backdrop.

I will eventually come back and patch the ballast and scenery, perhaps when I add the trees, but for now the switch is working again and I can turn my attention to something else.

Posted by DandHColonieMain at 5:31 AM