I had some free time to devote to this layout, which I hadn't touched since early 2020. That was around the time that the Covid pandemic started, and I had ordered some structure kits from Japan but they were delayed in shipping so that by the time they arrived I just set them aside. I was delighted to find them again and be able to work on this. 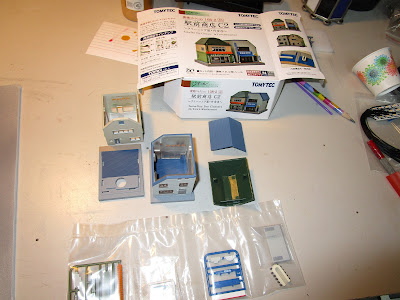 Originally, I had grand ideas to light up the interiors of the buildings with lights. Having experimented with SDM LED lights and fiber optics, I was comfortable with the principles behind doing that. Unfortunately, I discovered that the Tomytec kits are not good for this sort of thing. Though they have a lot of good things going for them, nice tight corner joints wasn't on the list. They leaked lighted from every corner, through the roof seams, and along the bottom. When building my first kit I took precautions by painting the insides of the walls black (to block light), and then white (as they would be visible) but the effort wasn't worth it. Tomytec kits are prepainted, usually to a reasonably good degree (better than I could do without putting in a lot of work) and snap together onto molded bases. But their ease of assembly and disassembly meant that tolerances were loose, and since this was a traveling module I wanted everything glued up. So, the lighting was the first thing to go. 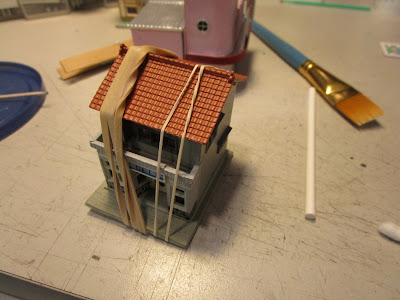 I did dress up the buildings to make them more individualized, though. I ditched most of the bases (except for a couple of structures that had warped walls which needed the bases to keep them square). Some of the trim was painted different colors, and the roofs of several buildings were repainted. I applied ink and alcohol washes to all of the sides. The kits come with stickers... all in Japanese which I can't read... so I stuck some on that I liked and the rest I set aside. I freely mixed and matched them too, so I might have a barber shop displaying a sale on ground beef and a movie theater offering tours of a tea factory, but who knows? 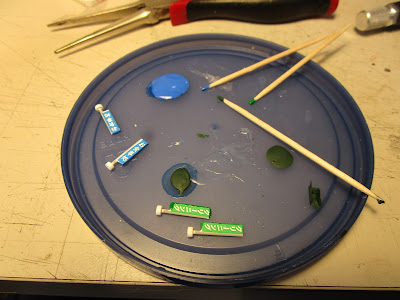 All of the buildings were arranged to fit certain spaces, and I think that together they look pretty good. I doubt that they realistically model a section of actual Tokyo, but that isn't my goal with the layout. It is supposed to look like a typical village in an Japanese animated cartoon ("anime") and I think it accomplishes that nicely. I especially like the apartment complex. 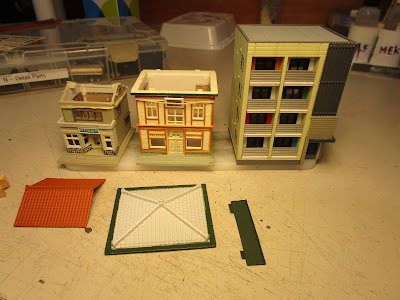 My row of stores started to take shape. Yes, the architecture is all over the map but I think it is charming, and perhaps cute. 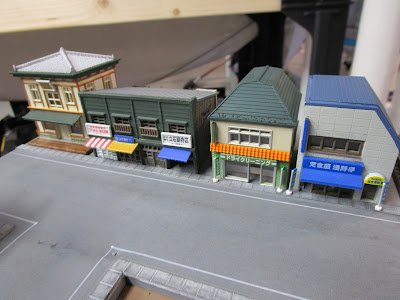 I had purchased a movie theater which unfortunately came painted an odd shade of pastel pink. Perhaps there are real movie theaters like that in Japan, but I didn't like it. However, repainting it looked to be a lot of work so I just had to live with it. Unfortunately, it was a little too large for the space I devoted to it so it was "downsized" on my bandsaw. 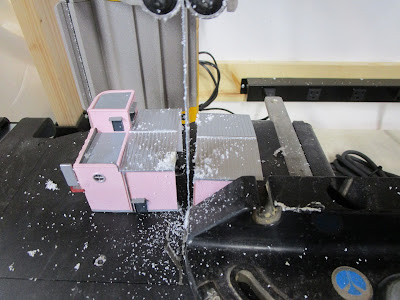 Once the theater was set in place with a few other stores, its gaudiness was reduced. Or not. Either way, I did customize it with a movie poster of my favorite Anime movie. My wife suggested I use a Godzilla poster, which came with the model. Maybe that will be showing next week. 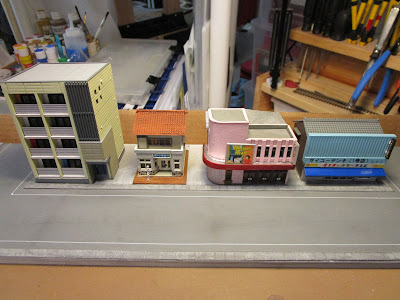 While I was at it, the roads were given street lines with a white paint marker and a ruler, which worked surprisingly well. 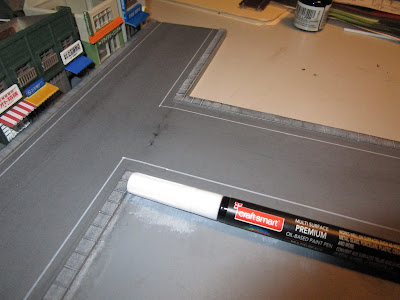 To transport my T-trak module around (14.5" x 37") I found some boxes at the local garden store that were twenty five cents each. Once I cut and pasted two together (well, actually four, as my first attempt was 1/8" too small!) it held my module perfectly. 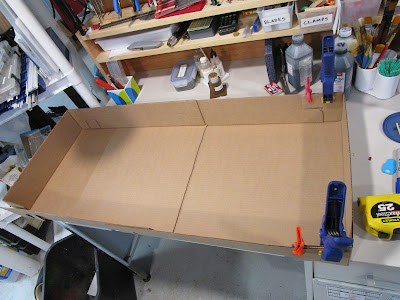 I still have to create the festival and market scenes, but with train shows on hold for the near future there is no rush. Some stuff has been ordered, and eventually it will arrive. Until then, I will work on details here and there. Of note, Japanese N scale is 1:150 and American N scale is 1:160, so not everything works together perfectly. But it is still pretty close.

Until next time, Sayonara.

Posted by DandHColonieMain at 5:43 AM