Tonight my wife decided that we should watch Ghostbusters on Halloween. Who am I to argue with that? It IS MY FAVORITE MOVIE after all! I mean, if you could hang out with a bunch of guys and goof off for a bit, destroy stuff with laser guns, and then get paid for it, wouldn't you? 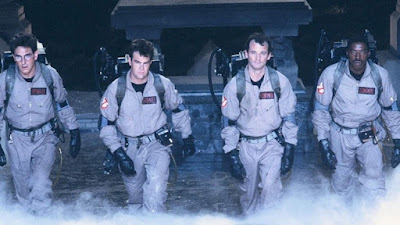 And for those who believe that the movie doesn't offer a lot of important life lessons, here are some I found in an article online:

1.) Believe Your Own Hype: When Gozer asks Dr. Ray Stantz "Are you a God?" he responds in the negative, despite a nod from Dr. Peter Venkman. That lack of confidence nearly marked the end of the supernatural exterminators. "Ray, when someone asks you if you're a god, you say 'yes,'" scolded Winston Zeddemore. In short? Believe in the best version of yourself.

2.) Live By Your Own Rules: Dr. Egon Spengler warned the Ghostbusters not to cross the streams, but in the end, that was their only option to defeat Mr. Stay Puft. "There's definitely a very slim chance we'll survive," he said. "I love this plan! I'm excited to be a part of it!" responded Venkman. It worked. Sometimes, rules are meant to be broken.

3.) Spare No Details: The Ghostbusters tried to warn the mayor that the city was "headed for a disaster of biblical proportions." What finally drove home their point? A more complete description: "Fire and brimstone coming down from the skies! Rivers and seas boiling! Forty years of darkness! Earthquakes, volcanoes, the dead rising from the grave! Human sacrifice, dogs and cats living together! Mass hysteria!"

xpect the Unexpected: What ended up terrorizing New York City? Mr. Stay Puft, an overgrown marshmallow. "I tried to think of the most harmless thing. Something I loved from my childhood. Something that could never ever possibly destroy us," Dr. Stantz explained, as the giant treat wandered the streets menacingly. "Mr. Stay Puft!"

5.) Know Your Worth: After trapping "a focused, non-terminal, repeating phantasm," the Ghostbusters demanded $5,000 from a hotel manager. When he refused to pay, Dr. Venkman simply responded, "Well that's all right, we can just put it right back in there." He relented, saying he'd pay "anything." Know what you're worth, and don't accept anything less.

6.) First Impressions Can Be Incorrect (But They Matter): Zeddemore thought Gozer was a man. Dr. Stantz declared her to be a woman. "Well, whatever it is," Dr. Venkman noted, "It's gotta get by us." Don't get hung up on first impressions. It's not always what matters most. (Still, Dr. Venkman did encourage his cohorts to "suck in the guts," so hey, make an effort.)

7.) Stay Optimistic: After they were fired from their university jobs, Dr. Venkman refused to get down on himself. "For whatever reasons, Ray, call it fate, call it luck, call it karma, I believe that everything happens for a reason. I believe that we were destined to get thrown out of this dump," he said. "To go into business for ourselves." They did, and it worked out pretty well.

8.) Be Open-Minded: "We're ready to believe you," was the team's motto. It worked. Be open-minded. You never know what you could discover.

9.) It's Cool to Be Smart: And if you try your hardest, you could save your city.

Posted by DandHColonieMain at 8:11 AM