The prototype terrain here was built up significantly which in part allowed for the state highway to cross the railroad tracks. However, I didn’t want to build the area up too much as I wasn’t going to construct the road and I didn’t want to substitute a non-prototypical tunnel. Some gently rolling hills, covered in greenery and trees, would do nicely. But first, I had to fix a troublesome track joint that worked 99% of the time but occasionally derailed my scale-length heavyweight passenger cars. I decided to fix it now before the scenery went it... always a smart choice. 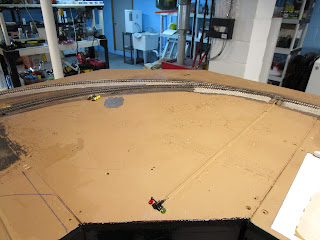 In the past I have used metal screen wire and plaster, cardboard strips and paper mache, and cloth glueshell scenery methods, but here I decided to try green florist foam as something new. One of the main advantages is that it is easy to stick trees in because you can just shove them down. And, it is easy to cut with a knife and can be even mashed around with your fingers. It sounded promising, so I went to the craft store and looked at their selection of green florist foam. It came in pieces that were 1.5" thick, so that formed the basis of my hill's overall height. 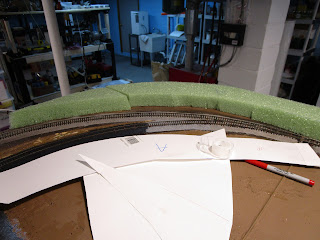 While it is possible to use a steak knife or a rasp to shape it, I decided to use my small bench-top belt sander. To avoid an explosion of green dust everywhere, I did it outside. And it worked pretty well. Not only could I use the belt's abrasive surface to round things over, by pushing the foam into it at an angle the belt would engage and slice through it like a hot wire tool. Yes, it wasn't precise, but real landscaping isn't either. Though it wasn't dangerous, I am not sure I would recommend it to others. A hot wire tool would be a lot easier, and perhaps cheaper too. And it wouldn't leave your belt sander looking like a giant green furry monster! 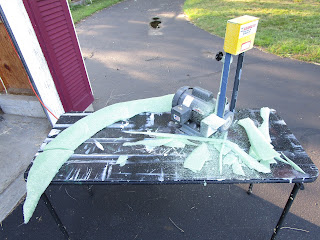 The only downside from working 100 feet and a flight of steps away is that I made at least a dozen trips to bring it down to the layout to set it in place and see how I liked it. It was tiring by the end, and I had five different pieces to do. Once I was satisfied with how it all looked, I glued them in place with some Loctite construction adhesive that was safe for foam. 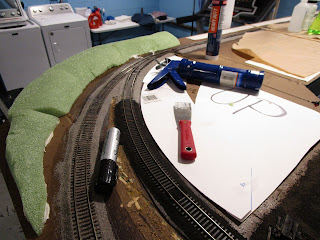 One other thing to point out: along this section of the layout I plan to have a curved backdrop. To give me clearance room between the hill and the backdrop, I drew a curved line that will match the radius of the backdrop. I don't need to carry the scenery exactly to that edge, as a gap will be acceptable. But, just the same when forming the hills I made sure there was a 1/4" or so margin all around the back. 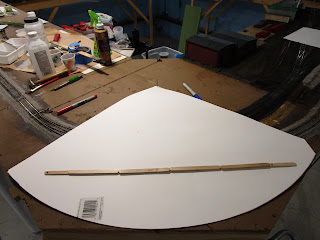 I also wanted a foreground hill which would help hide the entrance to the yard. Also, without it there wouldn't be much of a cut at all and I would need to rename the area. There were a lot of gaps in the foam, and some of the transitions were too steep. I needed to smooth things over, fill in the openings, and blend everything together. Taking a page out of Lou Sassi's books (literally), I turned to "Ground Goop." 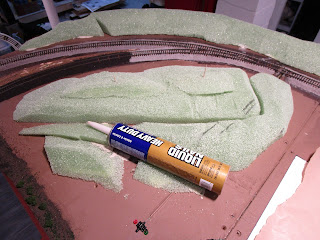 Posted by DandHColonieMain at 6:04 AM