Blue sky for the backdrops

Here is an issue that has troubled me for the past few months now... what color to make the backdrops. I initially planned to use custom printed ones by LARC Products, who have an extensive selection online. I have met the owner Bill Brown on several occasions and found him extremely helpful to work with. For this project, I feel that he went above and beyond the call of duty. The problem I have is that I want a nice, bright blue sky without many clouds. There are couple of reasons for my preferences.

First, I am modeling May and at that time of year in the northeast the sky is nice a well lit. Second, I would rather model a pleasant sunny afternoon than a cloudy or gray one. And, whilst I do like clouds in the sky (I am a card carrying member of the Bob Ross fan club!) I find clouds on a backdrop generally distracting. When they look realistic they draw your attention away from the models, and when they look awful... they look awful. The trouble has been getting a blue printed that looks good on the computer screen, good in person on the layout, and good in pictures. 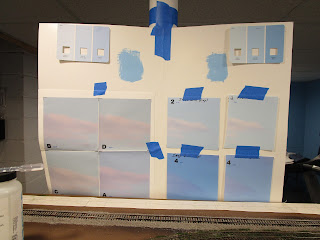 Above are some samples of skies that Bill produced based on my requests (ignore the clouds in them). Some appear nice on my computer screen but severely faded in person. Some appear a bit grayish or purplish in person but again on the computer look great. The two paint splotches on the top are actually the color of my basement walls and they are a vibrant blue. I would like that for my backdrops, but even in the picture above they appear washed out.

I really don't want to paint backdrops myself, and if I do they will only be plain blue. I would like a few clouds on them, and I don't want to attempt that. I am also building my layout in sections and want the backdrops to match, but they will be purchased over a span of time, so I think having them printed is the best way for consistency. But I don't know.

So, my backdrops are currently white... perfect for a stark winter scene, but not much else.

Posted by DandHColonieMain at 12:40 PM