With seven of the eight cars already completed towards my MMR certification, I was on the home stretch. What's more, I didn't have to scratchbuild the last car if I didn't want to (only 4 of the 8 must be scratchbuilt enough to earn judging points) so as long as it was "super detailed" it would qualify. Still, I had come this far and figured it might be nice to say "I scratchbuilt them all." But what to model? I knew for sure I didn't want to do anything associated with cows!

Each of my models has been a personal, introspective journey through my history and connection with railroads. Two cars were based on railroads I liked as a kid (Conrail, BN); two models were based on current modeling interests (D&H, B&M); one was selected for the pure challenge of doing something different (the Borden butterdish car); and one was based on my growing interest in the Maine two-footers. I love all things British and especially Welsh narrow gauge (which the Maine two-footers actually copied... so I suppose I can check that box) and my GWR cattle wagon accomplished that. But, something was glaring in its omission... the Arcade and Attica Railroad! 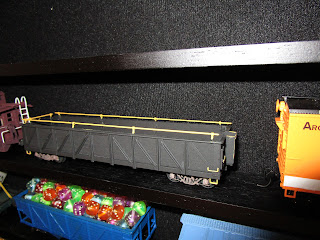 I have a passion for the A&A going back at least thirty years. As a Passenger, Railfan, Stock owner, online forum moderator, and occasional modeler, I have collected of the A&A in multiple scales and gauges. For my MMR I wanted to build something related to them, but wasn't sure what. One of their boxcars would be too similar to the B&M car. Their open gondola #300, which is a war-emergency gondola with steel and wood sides, would be an interesting project but I have already kitbashed a model of it. If Funaro and Camerlengo ever gets around to releasing their Boonton coach kits I could superdetail one of those, but it has been 18+ years and counting since I was told they were in the works. So, what's left? The A&A has a plow and two cabooses but neither was the simple project I was interested in.

Then I remembered Maintenance of Way (MOW) car #522. The prototype originally started out as 40-foot steel boxcar #522 built in 1952. In 1972, the A&A cut down and removed most of the boxcar super-structure leaving just a small portion on one end, which they walled off and added a door. The result was essentially a flatcar with a secured storage area on the end. It was used for gravel service by chaining a dump truck to the flat portion and having the truck spill the gravel onto the track. Weed control involved chaining a tanker truck on the back. The car was first shown in an article by Harold Russell on the A&A in the September 1978 issue of Model Railroader magazine, and a follow-up construction article by Mr. Russell without drawings appeared in the May 1979 issue. I asked online on several forums but no one had any other pictures of the car from the 1970s. I then reached out to Mr. Russell himself and asked if he had any further pictures of the car but he didn't. He was gracious enough to allow me to post here the pictures he took for the article, which I really appreciate.

I also had some pictures of the car that I took in May of 2007 when I visited Arcade, but by then the railroad had completely cut off the boxcar portion, and the remains of the flatcar were rotting away. It had been used hard and put away wet, so to speak. I have been told that the A&A "used every part of that car" and it served its many functions well. Still, the pictures showed the sheet metal flooring that had been installed and it also gave me a couple of other handy tidbits of information. When I took pictures of it, I had no idea of the history of the car but I am sure glad I did. Here was the simple, fun project I was looking for, and it was two different cars in one!

As I started researching where to begin, I had to figure out what type of boxcar it started off as. It was a 40' steel boxcar, but there are many types of steel boxcars. And there are many modelers who do excellent work detailing these specific types of boxcars. Without knowing the actual classification of boxcar I would never be able to get plans and build an accurate underframe, but I had no clue what it was. So, I sent a picture to Pierre at Elgin Car Shops who instantly identified it as a 1937 AAR designed boxcar. He couldn't confirm whether the internal height was 10 feet or 10.5 feet, but I gave him a pass! With that in mind, I started searching for underframe drawings.

And good luck with that! I am sure they are out it in the wild somewhere, but the Train Shed Cyclopedia #17 featuring boxcars didn't help. I found lots of online blogs and articles about specific boxcars, but none for an AAR 40' boxcar. And some commercial manufacturers don't always focus on prototype fidelity when it comes to making models of them (and who can blame them? We rarely flip the car over and look) but one company that did excellent work was Innovative Model Works (IMWX). They were later bought out by Intermountain, but their boxcar kits are very good. I thought about buying one to use as the basis for my car, but that likely wouldn't get me any scratchbuilding points. So, I bought an Accurail kit and used that for dimensions, along with pictures of the IMWX kit, to scratchbuild my frame. 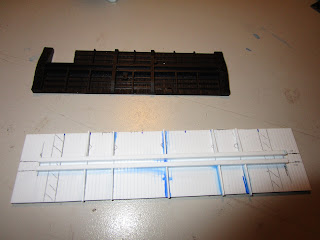 It started off as a piece of 0.060" thick styrene, cut to size, and with some 0.020" thick Evergreen freight car siding laminated on the side that will face down. Then, the pair of longitudinal center beams as well as the cross braces were built from pieces of styrene cut and filed to the proper profile. I fabricated everything on this car myself. After the first night's progress, I clamped everything flat so it would dry without warping. With an open car like there, there was absolutely no place to hide sheet steel to prevent it from bowing so it had to be kept as flat as possible. 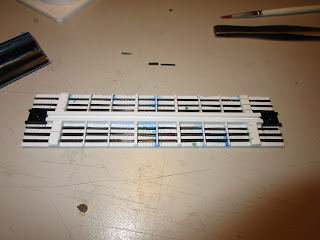 Then, I had to add the L-angle longitudinal bracing. Each side of the car had three stringers running from front to back, and each one passed under the crossbraces. As is typically the case, I had to install mine by cutting each piece individually and gluing them on in a nice straight line. The L-angles are Plastruct 3/64" (A-1) and no matter what I try the ABS plastic never sticks very well to styrene. I use straight MEK and that only produces a "sort of" bond. If I flexed it the ABS would pop off. However, Evergreen styrene angles are never this crisp so I am bound to use Plastruct. It took four lengths to do the entire floor, but like an idiot I bought only one when I went to the hobby store. So, I had to go back. Now I have lots in my supply!

And that seemed a good place to stop and regroup for the next step: the body.
Posted by DandHColonieMain at 3:57 AM