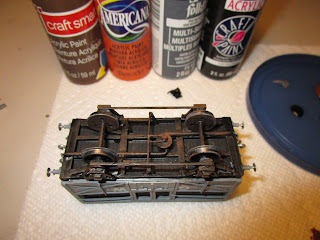 The cattle wagons lasted for decades on the GWR. Originally, they used powdered lime (limestone, not the fruit) to sterilize the lower third of the wagon interior and in short order it would leach outside of the wagon, giving it a white band all around the car. This practice was discontinued in the 1920s, and I didn't want to do that anyway. Instead, I followed the picture and gave the car a used appearance but didn't want to make it look like it was falling apart. The underside of the car, with its mess of pipes, diagonal braces, and brake gear, was painted flat black and hidden in the shadows. Drybrushing various shades of brown (dirt) and orange (rust) made them pop. Acrylic paint doesn't go on perfectly smooth, and any rough texture looks like accumulated dirt and crusty rust. 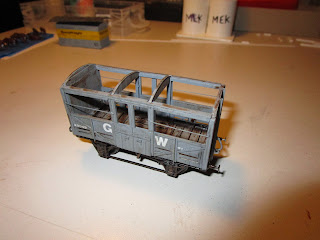 I then used mineral spirits and oil paints, mostly beige and brown but with a little black, to make washes which were then applied to the interior and exterior of the car. Even though the car was regularly disinfected, it still got dirty after transporting livestock on the inside. The outside was a different change of pace for me, as I am sure they used lead paint on the wooden body and thus it wouldn't rust like metal boxcars and stock cars do today. It was nice to approach weathering this car differently from all the 50-foot steel boxcars that I have on my roster that seem to have rust everywhere. I also gave the cows a bath in brown oil paint wash to tone down their plastic look. 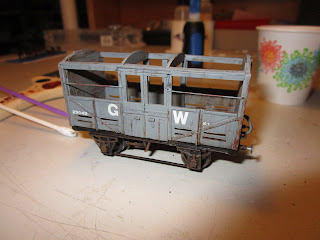 Looking at many of the pictures, I noticed that the iron and steel work did rust a bit more and that caused it to visually stand out against the gray sides. In some cases, it was extreme but I didn't want that. So, I used a microbrush to lightly stipple some reddish/black paint on only the steel angles and bracing. Whenever I thought I added too much I gently wiped it away. I wasn't going for a subtle look, but at the same time the rusting ironwork wasn't to be the focus of the car. I used acrylic paint as it is thicker than regular model paint and you can use that to add texture to the "rust." When I thought I had done too much I went to bed, but upon waking up in the morning I thought it was perfect. 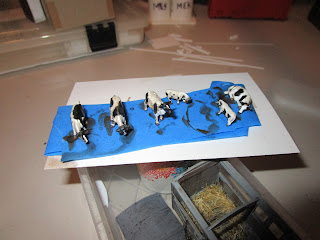 The straw or hay load (my wife says there is a difference, but I don't know it) was made by cutting up a cheap chip brush that I got at the hardware store. It was straw colored which looked good. I used a combination of scissors and a knife to remove them. WARNING... they flew everywhere on my work bench, including near some models with fresh paint that I had drying. It is probably best do cut them outside or near a garbage can. I easily collected enough for several cars, or maybe some future scenery projects. They were tossed into the car and encouraged to poke out the sides, just like in some pictures I had seen. Alcohol followed by matte medium secured them. 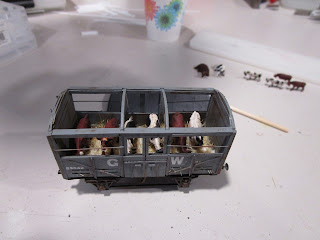 Finally, all I had left to do was add the cows. I looked online for realistic cows, and I found two sets by Bachmann in their "Scene Scapes" line that looked good (#33102, #33103). One set was brown with white spots, and the other was white with black spots. Beats me if cows of different colors normally traveled together. I assumed that they would face the same direction in the car, being as they were all loaded from the same side. So, I dipped all four of their feet in thick Arlene's Craft Glue and then stuck them down. Then, I sprinkled more of the hay around their feet and secured it with alcohol and matte medium. I left it to dry overnight, and by the next morning the roof was ready to be attached. 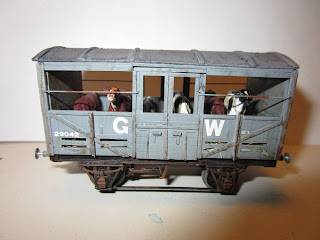 The roof met the car's upper edges pretty well, but there were slight gaps. I used thick beads of Loctite Superglue gel (once I discovered it, I absolutely love it for everything) and then carefully set the roof into place The glue took up and filled any gaps, and I didn't need to put any pressure on it to keep it in place. Once that cured, the car was essentially finished. My display cabinet has one shelf specifically to hold my scratchbuilt cars, and there was just enough room to slip this short car in. It came out really nice and I think the cows are cute. That being said, I was ready to moooove onto my next project.
Posted by DandHColonieMain at 4:03 AM