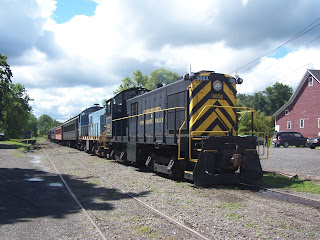 Recently I was thinking about the Cooperstown and Charlotte Valley Railroad, a heritage railroad that runs about 90 minutes from where I live. Though I have visited the area several times to take pictures, I have only ridden the train once. And that was on August 17, 2014, when the Alco Historical & Technical Society charted a train for a "rare mileage trip". Now, the entire railroad as it currently exists is only about 16 miles long, and it runs from its southern connection with Norfolk Southern (previously C.P.) at Cooperstown Junction up to the Village of Cooperstown. I wasn't quite sure how much of that would be "rare" since I had never ridden their regular train, but it seemed like a fun thing to do. I even got my wife to go along with us. It also included a buffet lunch at a local barbecue restaurant, so you couldn't go wrong. 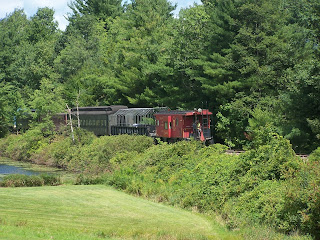 I will mention at the onset that my wife and I love to ride excursion trains (and I imagine anyone reading this blog does too) but our favorite aspect isn't a vintage steam locomotive or nicely restored coaches or even the scenery. The best part of any trip is the opportunity to ride in an open-air car, usually a gondola or an old converted coach. Getting the rush of the fresh air, seeing and hearing the noises of the train and scenery going by you, and the ability to walk about and stretch make it the best car on the train. The CACV had just such a car, a gondola with a frame for what I would guess would be a tarp roof in the fall. We spent a lot of the time there. 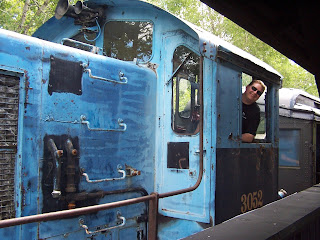 But, one of the things the AH&TS did to try and raise money was a charity raffle for a cab ride. I bought a ticket or two myself, but what I didn't know was that my wife bought a ton of tickets on my behalf without telling me. How many? I don't know, but I was just as surprised as anyone to find out that I won! So, the crew led me up to the second of two locomotives on the train (there were two Alco engines pulling our consist because it was an ALCO sponsored excursion train). It was a cozy cab indeed. Alas, there was no one with me in the cab for the ride and for the first couple of miles I actually got bored being by myself. Can you imagine? 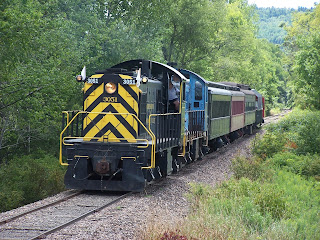 So, when we got to the first photo opportunity spot I asked the crew if my wife could join me, and they agreed. As a result, she got her first cab ride. I don't think she appreciated the nuances of an old Alco bumping around or the noise and grime from a working piece of machinery, but we both got a kick when the engine literally shut off on its own twice during the trip! They thought we had done something, but we had only been sitting there looking out of the windows. Crazy old Alco engines! Despite the set backs, I really got a thrill with the cab ride and now appreciate even more the hard work that railroad crews put in for hours in a cab. 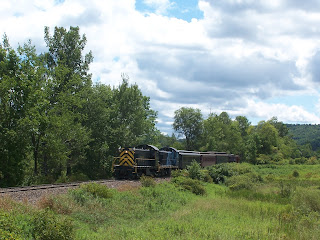 The railroad ran through some pretty scenery, and every now and then we would see water from a parallel stream. Despite being in the summer, the grass and trees weren't dead from the heat and many of the pictures I took show a bucolic side of New York State that I miss living near Albany. Someday, hopefully we can retire and move back out into the country. When we got to photo spots, I sometimes got out to take pictures and sometimes I just ducked in the cab so I wouldn't be visible and ruin everyone else's pictures. I imagine that if you squint enough in some you can still see me. Oh well. 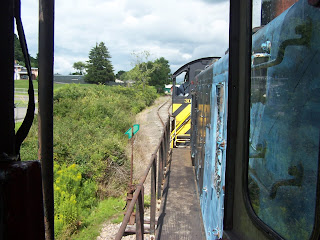 The next couple of photos show the train arriving in the Village of Cooperstown. The old train station in the Village itself has some boxcars and a passenger car on display, and it is still used as the headquarters for the New York, Susquehanna and Western Railway Corporation, but it has no physical track or corporate business connections with the CACV. A road separates the northern most end of track for the CACV and the isolated railroad equipment at the old station. The CACV built a runaround track just south of this area where its tourist trains can turn around before their return trip to Milford, the departure area for trains and about the half-way point of the railroad (the southern half really isn't used much). 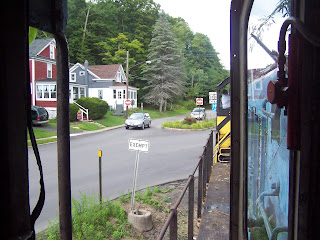 The rare mileage portion of this trip came in the fact that we ventured north about a half-mile from the passing siding. I don't know when Glen Avenue, the road separating the active railroad from the station, had been paved over and cut the track in two, but it had been many years. From what I understand, someone had examined the track up to Glen Avenue before to make sure it was safe for travel but the clearances would be tight. We started off by heading along track that ran parallel to a Price Chopper parking lot. I am sure that many of the shoppers were very confused to find a train along that stretch of track. 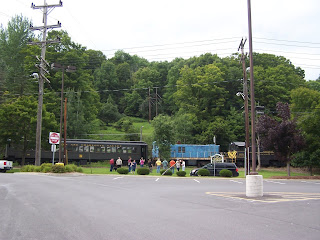 When we stopped to take pictures, I suggested to the group leader that we should get together and take a group shot. I am sure we have all seen at one time or another photos or movies of old railroad groups who chartered trains and happened to take pictures of themselves. They appear on EBay every now and then, and I thought that perhaps someday this trip would be remembered for the rare mileage we went on. Sadly, I never got a copy of the group picture but perhaps I will reach out and ask someone who took one for a copy of it.  I did get a picture of the train parked next to the parking lot with about a dozen people in it, but our group was much larger.

And then we slowly, very slowly, ventured north to the end of the track. The pictures here tell the story... 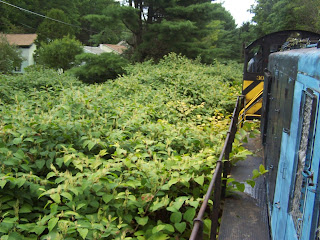 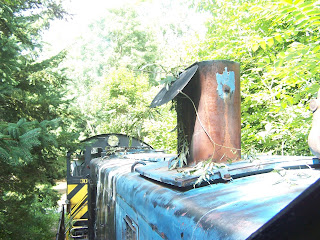 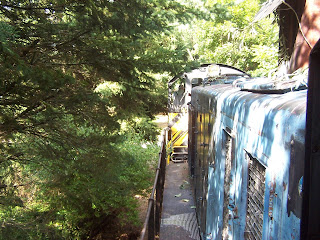 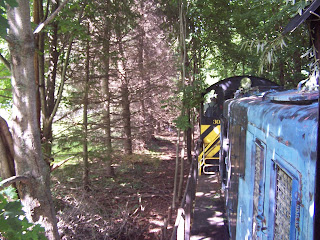 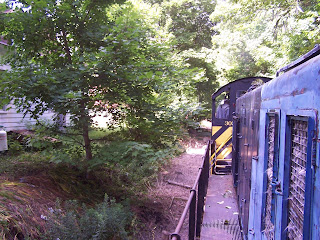 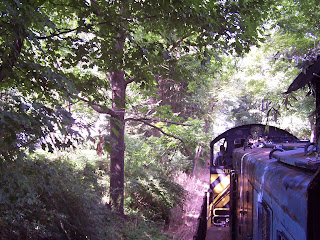 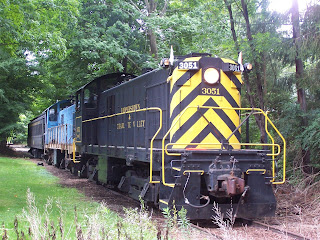 We finally stopped about 100 feet from the road. Then, everyone got out and took more pictures. Since I was riding in the cab by myself at the time I got a view that few others did, and since I was further up from the rest of the group in the coach I got an extra 10 feet of "rare mileage!" In fact, it is only now looking at the pictures that I realize they cut the train behind the first coach. I didn't remember that. The trip had taken us through dense forest areas, behind houses (and I have no idea what those homeowners thought when they heard a train sneaking through their back yard) and through a tunnel of trees that hasn't been disturbed in years. We also broke one of the rear-facing mirrors on the engine I was in when it hit a branch. Oops! 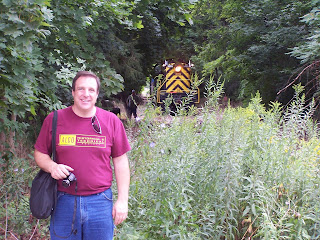 My friend Peter, who is a great guy and resource for anything train related, posed on the road with the train behind. This distance is how far we were from Glen Avenue. 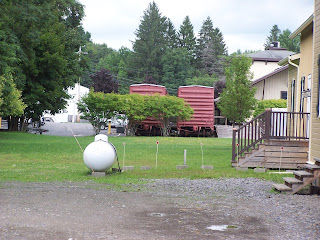 Meanwhile, if I spun 180 degrees and walked a little further north this is the view of the rear of the station, as well as some captive boxcars. Two coaches are on the right-most track behind the boxcar. This equipment is likely stuck here for the near future. 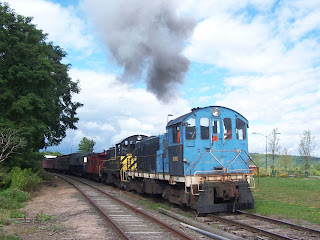 After we all had a good stretch, the engines and the single coach were backed up to rejoin the rest of the train. Then, the engines ran around the consist and we headed back south towards Milford. I remember we rode again in the open gondola and we talked with the general manager of the CACV at the time. He had big plans for events for the future, and was a genuinely nice gentleman to deal with. Having some experience with the management and logistical issues that come from operating a short line railroad, it was interesting to hear his take on things. They also sold hot dogs on the train at a pretty cheap price, and I bought one. I am a sucker for hot dogs. Yum!

Since this time, the AH&TS hasn't sponsored another trip, and I haven't been back to the CACV either. From what I understand, the "blue beast" (my nickname) for the engine I rode in has been repainted into the black, white and red Canadian National scheme #8223. Here is a great online picture of her now. There are also several other Alco switch engines on the property with various owners. Were it not for the pandemic I would have probably have ridden it again this year. Perhaps in 2021 I will get a chance to return.
Posted by DandHColonieMain at 5:15 PM