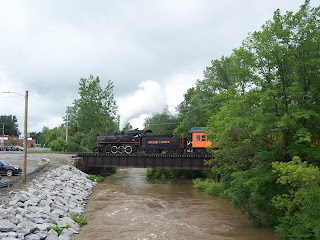 This past weekend my wife and I went to Arcade, NY, to celebrate the Arcade and Attica Railroad's 100th anniversary. This is a railroad that is near and dear to my heart, and it has been a part of my life for 30+ years. When I was younger, my family used to come to ride the train every year. In the past fifteen or so years, I haven't been able to make it back as much but I try to ride it when I can. However, as a shareholder of the company, I also usually attend their annual meetings. Originally a three-foot narrow gauge railroad in the late 1800s, it went through a series of corporate changes (and a widening of the gauge) until 1917, when it formally became the Arcade and Attica Railroad. Primarily a freight hauler, in 1962 the railroad decided to reacquire a steam locomotive and began running excursions using ex-DL&W "Boonton" combines which, from what I understand, are pretty rare. It later purchased some coaches too. The A&A still uses the same passenger cars to this day, which is a pretty remarkable accomplishment. 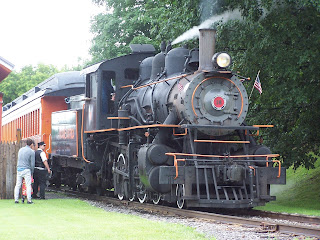 So successful was the conversion from steam to diesel power in 1941 that General Electric famously featured the A&A in their promotional material for their 44-tonner engines. In 1988, the A&A decided that it didn't make sense to keep two steam engines running for excursion trains so ten-wheeler #14 (former Escanaba & Lake Superior RR) was holed up in the engine house and consolidation #18 (former Boyne City Railroad) became the primary motive power for the passenger trains. They also have four centercab diesels: two 44-ton engines (#110, 111); one 65-tonner (#112), plus an 80-tonner (#113). Though two aren't used anymore, it is still a large stable for such a short railroad. The primary freight hauled is agricultural products for the area farms, usually in covered hoppers and tank cars. 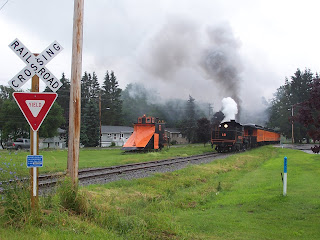 I have been riding and photographing the line for decades, even though it hasn't changed a lot. By now, I pretty much know all the good photo opportunities. Rarely do the train consists change either (I would love to see a boxcar in the mix sometime) and the steam engine always faces North. However, after rebuilding the wye in Arcade recently the railroad decided to turn the train engine around for a couple of weekends. One was their official 100th anniversary celebrations during Memorial Day weekend (sadly, I was in Maine), and this July weekend was the other. I couldn't pass up the opportunity. 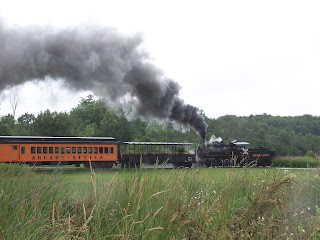 My wife and I decided to take pictures of the first train of the day, and ride the second. It was raining off and on during the first trip, and I questioned our logic. But, the decision was made so away we went. There had been a lot of rain over the past week and various areas were flooded, making some pictures challenging and others impossible. But, we made the best of it and my wife has really turned into a great helper for me. She will have the camera ready for when I jump out of the car, or point out good places to shoot from. She has connections to the railroad too, as her grandmother lived a couple of houses down from the enginehouse. 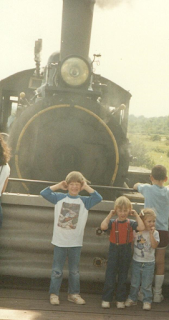 We rode the second trip and spent nearly the entire time in the open-air gondola. Whenever we go on train rides, we always try and get to the open car if possible because it is so much easier to take in the sights and sounds of the passing countryside. It used to be open at the top and you would get covered with water and coal bits that came up the stack, but now there is a roof. That reminds me of the time we rode it on a date ten years ago and she wore a lovely white sweater... oops! The roof also provides some shade from the hot July summers, and it is a welcome relief.

The A&A's gondola is the same car that I rode in 31 years ago, and just as loud! My wife had to cover her ears for every road crossing whistle. When I was a kid I used to as well (that's me on the right in the white shirt with the blue sleeves... in 1987!) The locomotive has had several whistles over the years, which was discussed in an interesting discussion on an online forum. They use an even quieter ones for in town and use the louder one only for out on the main line. 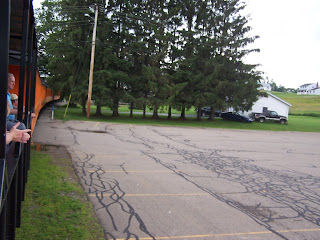 Everyone has a "dream house" that they would like to live in. My dream house has always been a little place in Arcade, with a railroad that cut across its driveway. It doesn't look like a dream house, but the idea of seeing a train every day always makes me smile. The large parking lot next to the house belongs to the Arcade Fire Department, so I imagine the homeowners get to hear a lot of loud noises between the trains and the fire alarms. The steam engines burn wood while in town to cut down on the black smoke from making the houses and laundry dirty, which is a nice gesture. The picture on the right is me standing on the pilot of #14 in 1986, resplendent in solid black with yellow trim. While many consider that paint scheme to be the worst one that the A&A used (with perhaps the Halloween scheme of solid black and orange a close second), it is actually my favorite. I am sure that is entirely because it is what I remember from my childhood. Also, on the right are the wooden steps just behind the fireman, which were used to allow passengers to walk through the cab and get a tour of it. They recently brought that back, which is pretty awesome. I went through the cab on this trip but didn't take any pictures. 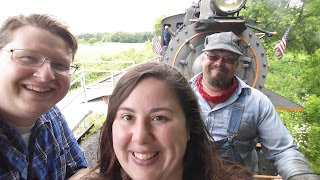 When we arrived in Curriers we decided to take a picture before the engine cut off. We assumed we would have the front of the locomotive to ourselves, but beside my lovely wife is Dean, the fireman on our trip. I guess he managed to sneak into our picture!  All in all, it was good to be back.  I also got to talk to my friends down there and meet up with some people I knew only from online chat rooms and such. This little railroad is one of the most important things in my life. It is impossible to be in a bad mood when riding the train. It is my favorite place that I have ever been to. Even as I step off the coaches I fondly look forward to the next chance to ride it. A big "thank you" to Brad, Dean, Pat, Brian, Matt, and the rest of the gang at the A&A!
Posted by DandHColonieMain at 7:33 AM