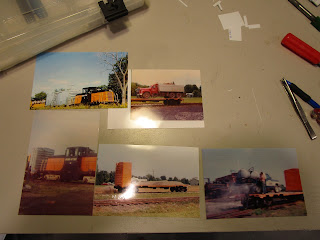 It was at this time that I reached out to the A&A to see if they had any pictures of the car. They were wonderful enough to send me several shots showing it in all stages of use: as a regular boxcar in its original powder blue paint scheme; as the cut-up flatcar in its blue paint; as a cut up flatcar in bright new orange paint; with a gravel truck chained to it; and with a tanker truck being used for weed control. These pictures were extremely helpful and I am very grateful to them for sending them. They aren't my pictures and I haven't received permission to post them, but a far-away view should be okay. 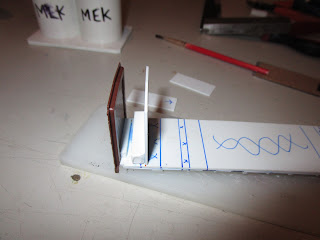 While I thought about scratchbuilding another boxcar end, I decided to try using a casting instead. I know... it is cheating! But, I wanted to see what challenges I might run into in using one. I searched online and the Walther's catalog and found Details Associates "Dreadnaught" boxcar ends (#6235). The two ends are not the same, with the differences seeming to be along the bottom. I used the one that matched the pictures. The end that faced the flatcar was in real life a portion of the surplus boxcar side cut and spun 90-degrees. The panel riveting lines give it away. I used plain styrene rather then trying to cut up the side of the Accurail boxcar kit. Everything was braced on the inside. 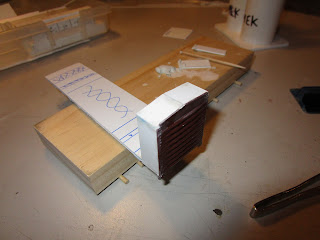 The Details Associates boxcar end casting had flanges along the edges to accept styrene or resin boxcar sides, and I used them to align the styrene sides and roof pieces. I built the top and inside end up with multiple pieces of styrene. The prototype had extra steel weld plates along the tops and edges to hold it all together but I didn't take that into account when building my car. In fact, I first went and puttied and sanded all of the joints perfectly smooth. Then, looking at the pictures I realized it should have been left "rustic" to replicate the efforts by the A&A crew when they built it. 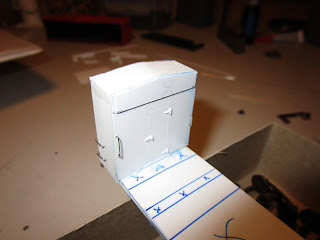 The inside-facing end had a doorway cut into it so that the crew could use the small interior for storage. I scribed the outline of the door on the end piece and then used small triangular pieces and small lengths of styrene rod to build up the door hinges and the door lock hardware. I find fabricated hinges look better than hinge castings, which can be clunky. At the top, another horizontal piece of styrene was installed per the prototype. After that, I drilled a lot of tiny holes with a #72 bit (0.025") and installed the grab irons formed from 0.015" stainless steel wire. This drill bit/wire size combo has become a favorite of mine. Interestingly, the prototype grab irons were not all the same size. 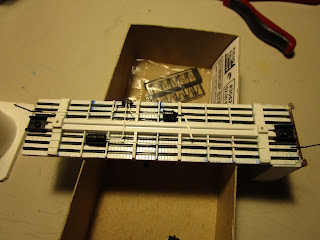 After that, I turned my car upside down and worked on the brake details. Even though I had some soft metal castings of brake parts which looked better, I prefer working with styrene pieces because it means I can use MEK instead of superglue for attaching them. The brake cylinder, air tank, and triple valve castings came from the Accurail boxcar kit. Styrene rods and strips were bent and attached to form the connecting air pipes. Cal Scale air hoses on the ends finished it all up. Unfortunately, adding them made it difficult to flip the car over without braking (get it?) them unless I set it on something tall enough to give them clearance. Now I remember why I always glued them on last! 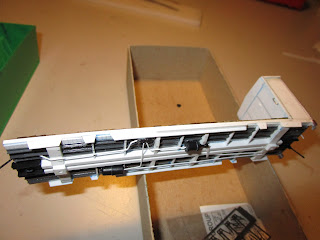 Looking at the prototype pictures revealed profile boards along the sides of the floor that stuck down. No doubt they were somehow tied to crossbraces that either supported the deck of the car or the boxcar door's lower channel. I formed these from styrene strip and glued them to the sides, and then added a thin piece that ran along the length of the side which hid the exposed ends of the cross braces. I have never really noticed these details before but on a car like this (especially once painted bright orange) they stand out. The traditional boxcar door's lower sliding track was made from Evergreen C-channel. 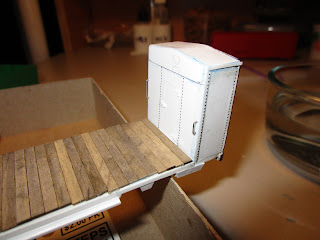 Next, I began adding the rivets to the boxcar portions of the car. The sides were originally cut at panel joints so each side would have two vertical rows of rivets, one on each edge. The new inner end with the door cut in it was formed from a three-panel piece of boxcar side. I used some Archer Fine Transfers rivet decals strips I had left over from the B&M milk car. The decking was also leftover Crescent Locomotive Works 2x12" scale lumber that I had purchased for my pair of flatcars that was a little too short for them, but perfect for this car. I shouldn't have installed it until after I painted the car though. Oops! Now I need to mask it for painting. 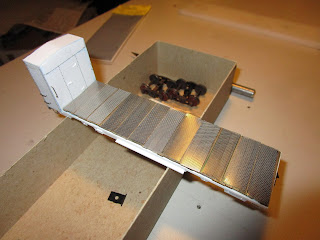 Finally, I worked on the most striking detail for the car: the patterned steel top that the A&A applied over the decking. Based on the 2007 pictures I took of the rotted car, I noted that the steel sheets had a pattern of holes drilled in them (as opposed to something such as a stamped diamond pattern) and that the steel was installed in panels. If I couldn't find a comparable substitute I would need to bury the deck in gravel to hide it, something I was loathe to do. I asked on an online forum and also reached out to noted modeler Pierre Oliver for suggestions, and both pointed me to Plano Model Products splash screen. It was perfect! I had purchased metal roofwalks from them for my B&M car but promptly forgot about them. I cut it into small panels and tested them on the car, and they looked great! It was now ready for painting.
Posted by DandHColonieMain at 4:21 AM