D&H RS11 #5004 was a distinctive engine. As noted previously, it had started off as one of six high-nose RS11 engines purchased from Alco in 1961. History of the class can be found here. However, #5004 was damaged in an accident in 1973 and received a chop nose, which can be seen in the photo below taken at Rouses Point on August 07, 1978. I recently learned a bit more about the actual circumstances that led up to the incident. 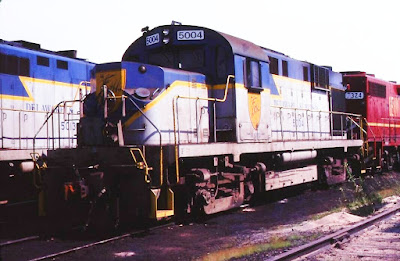 As told by Bill Bibbe, long-time D&H conductor, he was working in Mechanicville Yard in 1973. The crew was putting together a train and were moving a cut of cars. B&M train PB100 was also in the yard, and it was cleared by the yardmaster to depart. However, the D&H yard crew weren't informed of this and they continued to switch cars. Unfortunately, by the time the D&H crew saw the B&M train leaving they couldn't stop. Bill was riding on the footboard of #5004 and saw the crash coming. He kicked the angle cock to dump the air and apply the brakes. It didn't stop them and they slid into the side of some piggyback cars.

After that incident, the engine was repaired at Colonie. They took the damaged hi-nose, cut it down, and remounted it on the engine. Note: this is different from how D&H #410 was repaired... it received an entirely new hood nose from the N&W as shown here. The #5004 soldiered on for the D&H through the late 1980s.