I originally purchased these slides because I thought they were of the rare red D&H molasses tank cars. Instead, they are both of company service fuel tank car #35999. The first shot was taken in Colonie Yard in August 1975, and the second one is dated December 1978. 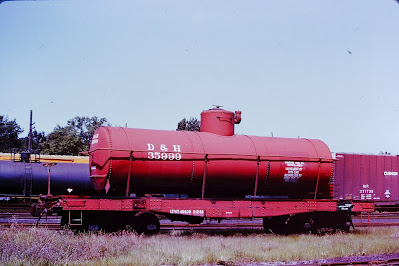 I am surprised that the D&H didn't use a real tank car for this, but instead appears to have mounted an old tank car body on a flat car frame. Maybe that is because the D&H never actually owned any tank cars (aside from the aforementioned molasses ones). 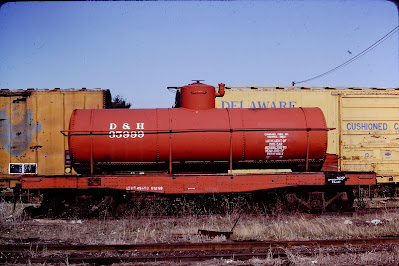 I don't know if it lasted into the Guilford era, but I have seen pictures showing old MEC tank cars by that time.

Posted by DandHColonieMain at 4:49 AM