Here is a shot of an unusual engine. Obviously, the RS3m in the background is #506. However, the engine it is coupled to is GP38 #4810, a National Railway Leasing unit. This shot, taken in August of 1989, shows the two engines switching in Binghamton. They are working for the NYS&W, the appointed operator of the D&H during its bankruptcy during the late 1980s. 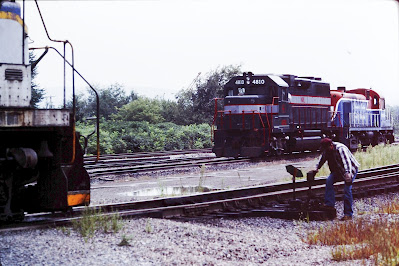 It is a time period that generally doesn't interest me, but it was host to a variety of colorful locomotives.