Take a look at this shot near Oneonta dated August 04, 1985. Led by Chessie engine #4175, there are ten additional engines trailing! No idea where they were coming from or going, but it is pretty neat. This type of light-engine move was pretty common with Conrail during the 1980s, and I saw a lot of it while rainfanning as a kid. 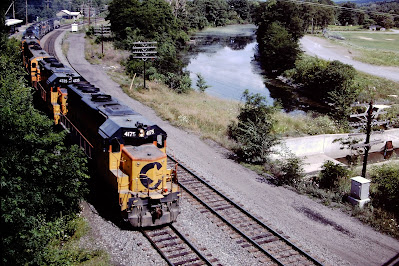 Also note the ballast on the tracks. It looks like someone dumped a pile of Woodland Scenics' ballast and didn't both to completely clean it off the ties. From the looks of things, perhaps the MOW crew laid down fresh ballast here.