The D&H's M.O.W. equipment in the late 1970s and early 1980s was painted a striking dark blue with yellow trim (as were many of their locomotives). I have posted previously about blue D&H wheel cars here and here, as well as other blue D&H M.O.W. equipment here. However, even the bright blue paint has a lifespan and by the mid-1980s it faded into a dull, grayish blue. Here is one of their wheel cars (the slide mount says #35413) in East Deerfield, MA on September 25, 1985. 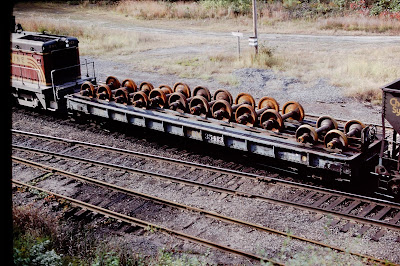 Oddly, the number #35413 is not in the sequence as the one in the first linked picture above, which is D&H #15961. The number in the second linked picture is out-of-frame, which is no help. I wonder how many blue wheel cars they had? I bet that Guilford kept all of the former-D&H wheels cars in their old numbering scheme, and all of the former-B&M wheel cars in their old numbering scheme. This could account for the disparity of sequencing.

Posted by DandHColonieMain at 6:46 AM