I really love Trailer-on-Flat-Car ("TOFC"), also known as "piggyback", trains. I think they are neat with the trailers sometimes perched on top of extra long flat cars with the highway wheels sticking down. Sometimes they look so top heavy that I feared they would tip over. Unlike container trains, which to me always seem to look alike (despite the dizzying variety of container colors nowadays), TOFC trains struck me as different and special. They were the "new" thing to hit railroading when I was a young railfan in the 1980s. I spent a lot of time building models even though I knew they likely wouldn't be run on my layout.

When one pictures a TOFC train they likely think of a hot shot train pulled by three or four engines and stretching a mile or more long. Most TOFC trains were like that. However, sometimes a single road engine would be called to pull a train. These smaller trains are more manageable and look a lot better on smaller layouts.

Even the D&H ran shorter TOFC trains. Here is one from January 1980 showing RS36 #5022 pulling a mixed train with a bunch of TOFC flat cars on the head end. 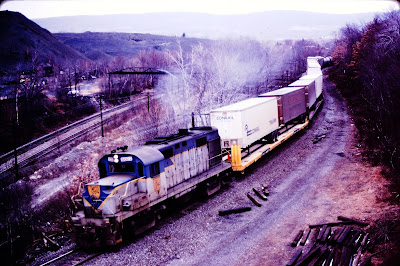 Here is another picture dated February 1986 showing RS36 #5016 pulling a train of containers on flat cars (COFC). While not as exciting as trailers, it too shows a train being pulled by a single engine. I think this was near Binghamton. Note the amount of filth on the forward side of the cab and battery box of the Alco. 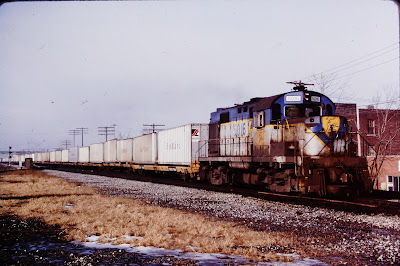 Posted by DandHColonieMain at 7:31 AM