Staying at the Bridgeview Bed and Breakfast

Typically on my birthday I do something train related, and this year I hoped to spend the weekend at the Bridgeview Bed and Breakfast which is located just outside of Harrisburg, PA. It is situated literally where it is surrounded on several sides by busy railroad tracks, and overlooks the Susquehanna River (and a railroad bridge crossing it). I first became aware of this BNB after seeing an advertisement for it in a Trains magazine my sister-in-law gave me for Christmas. I tried to reserve one of their "best rooms" (the ones with the best views of the bridge) for Memorial Day but they were booked solid. However, I noticed that my wife's birthday fell on a Saturday in June and she always wanted to go back to Hershey Park, PA. So, a trip here seemed like it would allow us both to have a good time. Of course, I didn't mention where we were staying until the day before the trip. 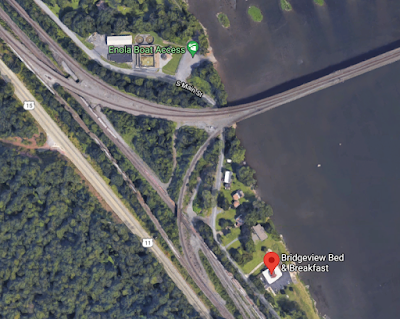 We only had the weekend but I took Friday off from work, so we would have plenty of time on the drive down to explore other places too. Most importantly, I didn't want this to become a "railroad-themed" trip and wanted to do things my wife would enjoy too. Upon arriving at the BNB, I heard a train and immediately ran to the deck to take some pictures. As you can see, they have a lovely (this picture only shows 1/3 of the deck) porch to watch the trains and the Susquehanna River. 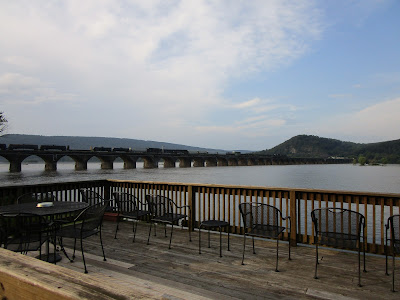 Sadly, it was rainy on Friday and Saturday evenings, causing me to watch the trains from inside for the most part. Some odd cloud and weather led to interesting pictures though. 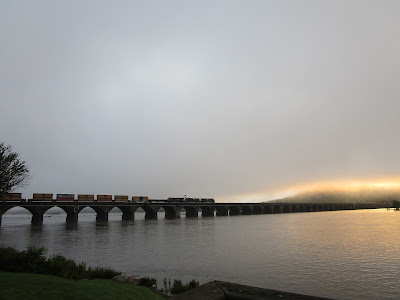 As was shown on the satellite map above, the tracks surround the BNB on several sides. And they are very close. Observe the NS train passing on the other side of the building. It is partially hidden in the trees. 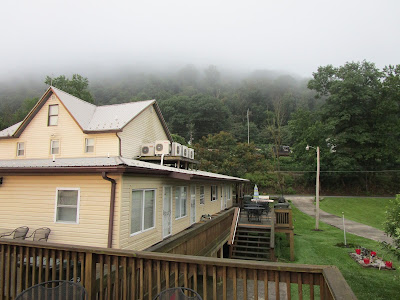 The name of the program escapes me, but there were television screens inside and out showing in real time the locations of trains approaching the bridge on a schematic display board. The red lines are where actual trains are, and the green lines show train routes that have been cleared. The Bridgeview BNB is in the very center of this map. 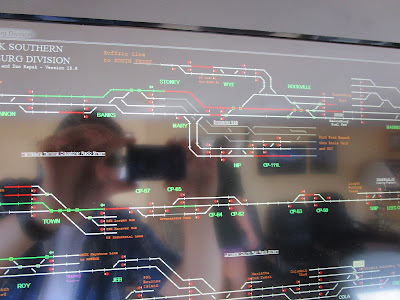 Considering I was away for most of Friday and Saturday evenings, and also left around 10AM on Sunday morning, I estimate I saw at least 20 trains. There were many more I heard while lying in bed getting ready to sleep. None kept me up during the night. 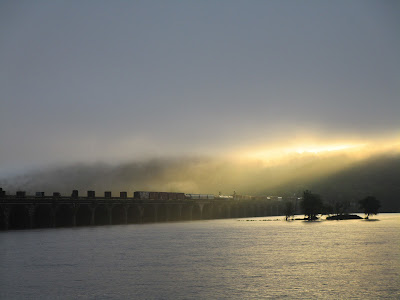 By the end, I didn't bother running to the window. It was cool to see so many, but most were Norfolk Southern and looked the same after a while. Two Amtrak trains pass during the mid-day but aside from that it is mostly NS. 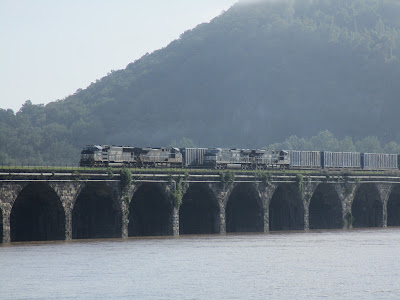 In all, it was a fun trip. I also fit in miniature golf, a day trip to HersheyPark which included a live-steam train ride and their water park (great on a 96-degree day), a visit to a restored Japanese house and garden, the Philadelphia Zoo, a Philly cheesesteak, a train store, and more. All in one weekend. I can't wait to go back!

Posted by DandHColonieMain at 1:37 PM