My L-girder "supporting" benchwork is done on three sides. The remaining side, which will contain the entrance to the center of the layout, is on hold for now because I need to think it through. However, I now have the lumber needed to begin working on the layout sections themselves which will sit on the L-girder benchwork. 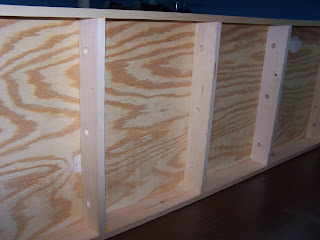 My layout will consist of three sections, each roughly 2' x 7'. They will be large enough to capture a scene without requiring a joint in the middle of it, while at the same time not be too large to prevent removal from the basement if necessary. The plywood for the tops of each section was cut at the lumberyard before Christmas, and it is interesting to note that 7' long plywood sections that Home Depot cut for me are not really 7' long. The difference is 1/8," which I suspect was the width of the saw blade, and while very small it is important to keep in mind because I don't want gaps between my layout sections. I cannot plaster or otherwise fill them with scenery easily if I want the sections movable, so I am building the open-grid shapes to this shorter dimension. It also means that sections opposite each other on the layout have to match in length, or everything might not come out perfect. 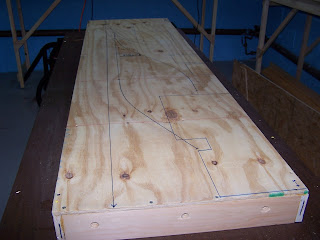 That being said, it shouldn't be a tough job. I spent an hour with my dog in the basement pairing up 1"x4" lumber to be the sides for the two of the sections. I then marked locations for the cross braces, which will generally be spaced every 16" apart though because of my 7' length one gap will be 20" apart. This might be too much, but if it is I can always add a small 1"x2" on the inside to support it. I planned the locations of the cross braces around where the track switches will be, as I plan to install under-the-table switch machines and don't want to get into a situation where they interfere with the benchwork. It is smart when possible to consider these things up front. I then pre-drilled the holes in the sides using a #6 drill/countersink. Cutting the cross braces went well because of my new chop saw. I set it up outside and let it rip. I drilled three holes in each cross brace with an 11/16" bit, four pieces at a time, with the bottom piece resting on a scrap of wood to prevent blowout.

The section I built for the Colonie Liquor sidings was the simplest of all because the plywood surface is flat. I may add hills and a tree line along the back, but the ground won't drop lower than the plywood. I assembled the 1x4" boards first and then glued and screwed the plywood on top. It went super quick and everything came out square.

Since my wood glue bottle's nozzle broke, I bought the cheapest mustard bottle I could find to replace it. After washing it out, I filled it with wood glue and it worked great. 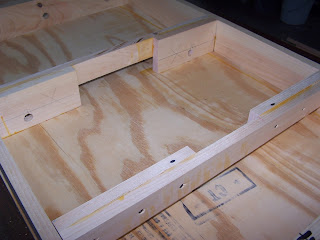 Slightly more complicated, the section for the Keis/Norlite sidings features a pond between the two areas and for that I notched two joists to allow for the bottom of the water. As you can see, "notched" isn't really the correct word. If I had a jigsaw handy, I would have just used that. But I didn't, so I didn't. Another tool to get down the road...

Unfortunately, when it came time to glue the plywood to the 1x4" frame I saw that my frame was rhombus shaped, meaning the corners were somehow not square. I couldn't physically shift it enough to match up with the plywood, so I removed the end piece on each side and shifted it in to match the plywood. Then, I used a saw to remove the overhanging plywood. The net result is now a section that is slightly shorter than 7'. When I frame up the opening side, I will need to keep this in mind. More importantly, in the future I will build the rectangle frame of 1x4" lumber, screw on the plywood top to keep it square, and then add the cross braces. 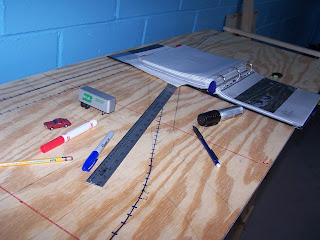 I also started to design the area that will be home to the Mohawk Paper plant. There, the track siding in front drops down a bit and many of the cross braces will need to be notched. I still need to figure out things like the grades, vertical curves, etc. I drew in the roads, as this area is full of roads, and there will also be lots of small houses crammed in. I can't wait to do them, as I will finally be able to build model kits instead of scratchbulding. In fact, the whole Paper plant will be represented by a small area in the front corner.

The long side pieces for these two sections were cut by a friend, and the cross braces I bought and cut from lumber from Lowes. Togethers, these added up to $122, so my benchwork total is now $482...

Posted by DandHColonieMain at 12:47 PM