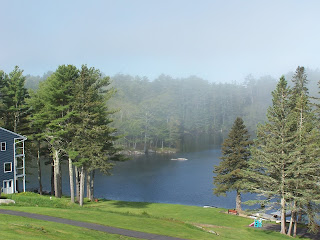 We drove up to Maine after getting out of work on Friday evening, which meant that by the time we actually crossed over the border into Maine it was pitch black outside. Along the way, my wife looked at the GPS on her phone to see that we were crossing over inlets, railroad tracks, and other points of interest. As I was concentrating on driving and couldn't see anything, I could only nod. Hopefully, tomorrow I can actually see something!

Our room at the Beach Cove Waterfront Inn was absolutely perfect. They had recently renovated half of the rooms and the bed overlooked an inlet out the window. Though the scenery was more reminiscent of the Adirondack Mountains than coastal Maine, it was beautiful and relaxing. We checked in late around 11PM, and we could smell the pastries that they were preparing for next morning's breakfast. 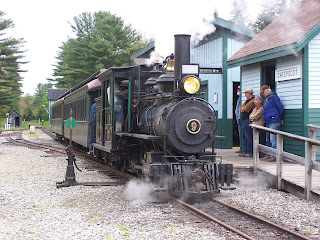 The history of Maine two footers is a convoluted one, with there being five original 2-foot lines developed to bring railroad service to the smaller communities of Maine at a much cheaper price than regular 4', 8" (standard gauge) railroads. However, as one after another began to fail in the 1930s and 1940s some of their equipment was purchased by the remaining railroads. Then, in the late 1940s much of the surviving equipment was purchased by Ellis D. Atwood and transported to Carver, MA, to run on a loop of track surrounding his cranberry farm. He also built from scratch some cars for his visitors to ride on. His passed away in 1950 in a boiler explosion, his successor passed away in 1967, and the Edaville Railroad struggled on until 1992 when it was closed and most of the equipment was sold to the Maine Narrow Gauge Railway Museum.

As a result, some equipment I saw this weekend could have been: (1) original to one or more 2-foot railroads, (2) replicas of equipment built by Edaville, (3) cars built within the last 60 years purely to carry passengers without regard to historical accuracy, or (4) authentic reproductions built in the last ten years or so. As someone whose knowledge of 2-foot railroads is pretty thin, I just planned to take pictures and enjoy the ride. 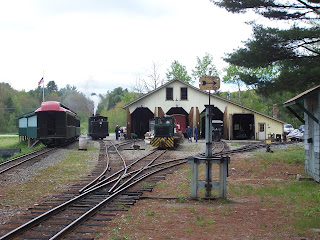 When we got up on Saturday morning, we headed off to Alna, Maine, and the Wiscasset, Waterville, and Farmington Railway Museum (WW&F). The real WW&F operated from 1894 to 1933 when it folded. However, as fate would have it portions of the old roadbed were acquired by a gentleman and in 1989 a museum and foundation were established to rebuild the track along the former roadbed. At the time of our visit, they had over 2 miles installed and were quite proud of the fact that it was all done by hand. They have several steam locomotives in various stages of repair, as well as a railbus, a diesel engine, a tractor-powered engine, some coaches, a couple of boxcars, a caboose, and what looked to be a tank car body. Their facilities consisted of a reconstructed station, car barn, turntable pit awaiting construction of a roundhouse someday, water tower, and a small yard. 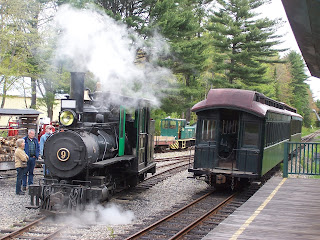 The train ride was pulled by a steam locomotive that originally ran at one time on the WW&F, and I was told that this is the only existing situation where an original 2-foot engine is running on the railroad that it originally worked on. There were two coaches, one (B&SR #11 loaned from Boothbay)  containing full-length benches and one (WW&F #3) containing seats with backs that flipped over depending on the direction of travel. We sat in the chair car, which was unique in that it consisted of one seat per side of the car. There just wasn't enough room for two chairs per side in this tiny coach! The interior detail was beautiful, with the carved woodwork and trim. Despite their small size, the builders clearly took pride in their work. 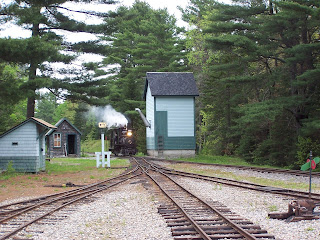 The train ride lasted about 20 minutes or so, traveling through the woods and past streams, and also going through one station area with a passing siding. We ventured to the new end of track which also had a passing siding and a clearing for a future sawmill exhibit. The train rocked back and forth and at times made me concerned (and I am a train buff, so I should have known better). I suspect it had more to do with the suspension in the trucks than the condition of the tracks. I have no idea how fast we were going, but had it been at night I would likely have been a bit uneasy. One can only imagine what it was like to travel at night in the 1920s when maintenance of the line was down and there was only an oil lamp to provide any visibility. 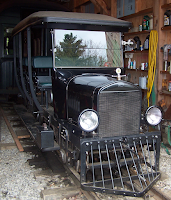 The engine ran around the train, coupled up, and back we went. It was cool to see them couple up. We stopped at the middle station where the railbus (referred to on the schedule as a "second class train") was waiting for us. We didn't ride it, but it would have been fun. When we got back we wandered around and took some pictures and then visited the gift shop. Though small, it has an extensive collection of railroad books on Maine 2-footers, as well as the usual magnets, pins, etc. We saw a print on the wall for sale that we wanted to buy, but sadly were told it was out of stock. I did come away with the book The Maine Two Footers by Linwood Moody, which I planned to purchase to read during the trip.

The staff were friendly and in abundance. I am not sure if it was their first public run day of the year, or a training day, or all the volunteers just wanted to "play trains" but there were probably 8 people on the crew for a two-car train. They were instructing at least one person in the duties of a brakeman, which was important here as the coaches are controlled with handbrakes.

All in all, the WW&F was fun and represents a lot of hard work by its volunteers. We didn't stay much longer as I am not sure what else there would have been to see, but when they put in the sawmill and provide demonstrations it will add something else to do. I was quite impressed with the place and wish them luck in the future.
Posted by DandHColonieMain at 5:46 AM