One of the most interesting things affecting railroading in the 1970s was the shortage of serviceable boxcars. Railroads didn't want to pay to repair boxcars because their return on investment was lousy, in part due to governmental regulation of rates. But, shippers still needed boxcars to transport their products. So, the government stepped in and changed the rules allowing railroads to charge fees for every day a boxcar they owned was offline on another railroad. Thus, "Per Diem." Many railroads, and especially short lines, purchased new boxcars to generate money with the goal (and hope) that their boxcars would never come home again. The daily rental charges were enough. Unfortunately, after a while there were too many boxcars out there and they did come home.

What this means to the modeler of the 1970s and 1980s is that every train that rolled by likely had several colorful boxcars in the consist. And, most were probably less than 10 years old. Not only do I like the looks of a colorful train, but boxcars in general serve as a wonderful canvas for interesting weathering effects. Go another ten years and by the 1990s, many of the cars were not only faded and dirty but also patched out with new owners' markings and covered in graffiti. Yuck. By modeling 1984, I am straddling the two extremes in appearance.

One other point: by 1984, 40' boxcars were extremely rare. I am not sure any were still used by the D&H for interchange service, and in reviewing my slides and other research I don't see any 40' boxcars from any railroad. Sure, there might have been a couple now and again but for my HO roster I have avoided 40' boxcars. Not only do they appear too small and out of place, but their paint schemes are usually from the 1940s-1950s and they have full height ladders, roof walks, etc., which would be gone by 1984. So, only 50'+ cars for me. 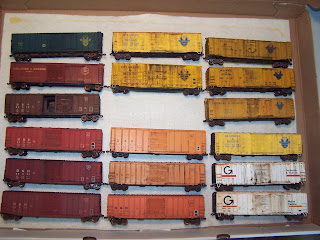 The D&H alone had an amazing amount of diversity in their boxcar paint jobs. There were red and maroon boxcars, some orange ones which were originally built and painted for the Upper Merion & Plymouth RR but instead were diverted to the D&H, yellow, green (solid green, and green paint-outs of ex-Reading cars, and brown. Add the blue and white "I love NY" cars into the mix and you have a little bit of everything! (Walthers also released a blue waffle-side boxcar as part of a 3-car set, though there appears to be no prototype for it. I might just track it down anyway for fun.) I cannot imagine how boring it would be to model the 1920s-1950s with nearly every freight car a boring oxide red or brown. 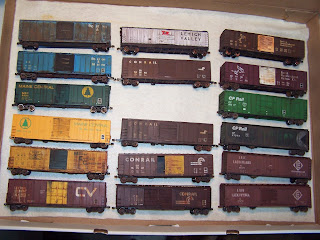 I have no idea if that is the appropriate breakdown for D&H trains in 1984. I didn't pass on buying a car just because it might not fit the ratio, but I did purposefully avoid lots of western roads like UP and BN. I focused more on D&H and Conrail. Since I probably won't have more than a dozen cars on the layout at one time, I should be fine. When it came to weathering, I focused heavy on the rust effects on the north-east cars and did more fading effects on the cars from the west. It wouldn't surprise me if cars rolled out of the Conrail paint shop already rusted. Cars that were newer based on the stencil info on the cars received lighter weathering. 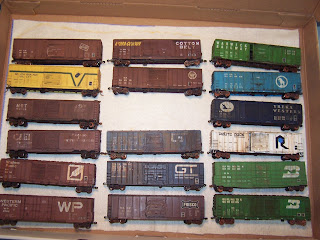 Even with my boxes of cars, there are still gaps. I haven't even touched the "I love NY" cars, but there is a good reason for that. I am a cheapskate. I generally don't spend more than $10 on a car, and there are no good "I love NY" cars for that price. Athearn/Bev-Bel cars have a really light blue, almost like a pastel blue, that could work for an older weathered car but not a 2-year old car. Bachmann recently released one too but tragically again the blue is more vibrant. Only Intermountain has the correct dark blue color, but the cars are about twice as much as I like to pay. So, I keep hunting train shows and watching EBay. I will eventually buy a couple and likely add decals for the "Operation Lifesaver" which was applied to some of the cars.

Also, the Bath and Hammondsport Railroad in central NY owned several boxcars in an attractive maroon scheme with white graphics including a wine glass emblem. They were used to ship wine out of the winery on Keuka Lake in Hammondsport, NY, and so clean were the interiors of the cars that other railroads would grab them for other uses instead of sending them back! As a result, it sometimes took months to make it home. I have a couple of these cars, but again by the 1980s they were sold to other companies and patched out. I am torn about defacing a really neat looking car, so for right now they remain weathered but not modified with patch outs. 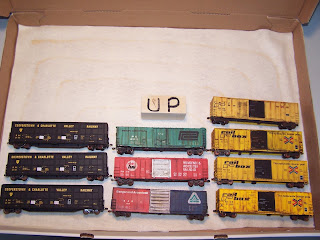 Despite my principles, I am torn regarding the Cooperstown and Charlotte Valley thrall-door boxcars. The C&CV was owned by the D&H directly from 1957 until it was sold to the Delware Otsego Railroad in 1970. Walthers released several limited edition cars that look really sharp in black with "Cooperstown & Charlotte Valley Railway" spelled out in yellow along the top, and a small yellow D&H shield on the left. Unfortunately, by 1976 the shield was painted out. I am not sure I can bring myself to do that to these cars, so they sit untouched. The block of wood keeps the pizza boxes from collapsing when stacked up.

There are a couple of other cars that I would like to acquire. Even though they probably didn't make it up to New York often, I would love a dark blue Chessie car with the kitten emblem. I think that is really classy. Also, Central Vermont had five boxcars painted white with black lettering for paper service that are really cool looking and might have found their way onto the D&H (link). I also need to do a couple of D&H "Reading repaint" cars in the two different shades of green. And one or two of the Rock Island's blue boxcars would be nice. And...
Posted by DandHColonieMain at 11:03 AM