Uh oh. A couple of years ago Athearn announced four new D&H GP38-2s (all in the lightning stripe scheme, though from several different eras). Then, they announced four new D&H GP39-2s in two variations of the blue-dip scheme. The #7401/#7408 are blue with yellow chevrons on the nose, and #7402/#7413 are blue with a solid yellow nose. And ALL FOUR are perfect for my layout!

Here is an image of the announcement from their website: 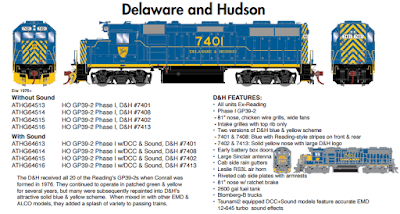 Since I already own an Athearn blue box GP38-2 model in each scheme, I may wait on some of these. I want my model roster to be Alco heavy, so I don't need a lot of Geeps. I cannot tell the difference between a 38-2 and a 39-2, though the extra detail on these Athearn Genesis engines is fantastic!
Posted by DandHColonieMain at 5:56 AM