In 1984 the D&H leased six Conrail G.E. U23B engines which were patched-painted and lettered "D&H" on the nose. It was minimalist to the extreme, but compared to other patch-paint jobs that were to come from Guilford they didn't look too bad. It helped that the D&H's Altschul blue dip paint and Conrail blue paint were pretty similar. It's ironic the D&H leased U23B engines because they had a bunch (#2301 - #2316) on their roster until June of 1983 when they were traded to the Maine Central. (And those are examples of bad patch paint jobs).

I have considered painting a model for my layout, which is set in May of 1984. Sadly, I have yet to find photographic evidence that the engines were delivered by that time. They certainly were on D&H property by the fall. I asked on the D&H Facebook group but they weren't able to confirm it either.

This picture shows one of them, #2922, in Binghamton's Conklin Yard on September 05, 1984. Just a little more than three months after my layout's time frame. 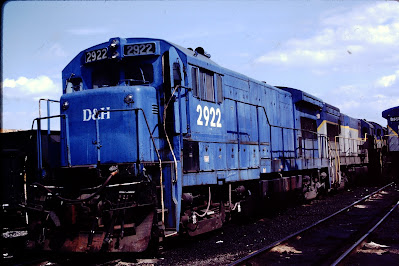 The second picture shows the same engine in November 1984. Note the dried leaves stuck in the radiator along the rear, which is common for G.E. engines. 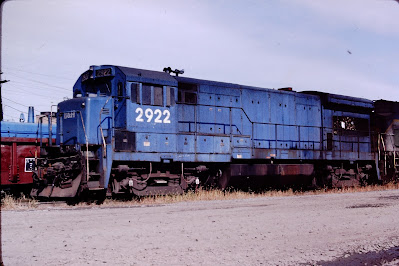 If anyone has any photographs of the engines on the D&H in May of 1984, I would love to see them!

Posted by DandHColonieMain at 7:12 AM