Who doesn't love pasta? As an Italian American, I know I do. And the fact that the world's number-one pasta manufacturer decided to build a pasta plant right near my hometown of Rochester, NY, was pretty exciting. It opened on October 19, 2007, and is still in operation. You can't miss it... it is painted bright blue!

I never got a chance to see when it first opened because that was around the time I was getting married, studying for the bar exam, and looking for my first job. In fact, my first encounter was when I visited the area in 2021 and happened to drive pass it while driving around. But while at a restaurant with my inlaws that afternoon, I met a Livonia, Avon & Lakeville Railroad conductor who frequently works the plant and we got to talk for a while. 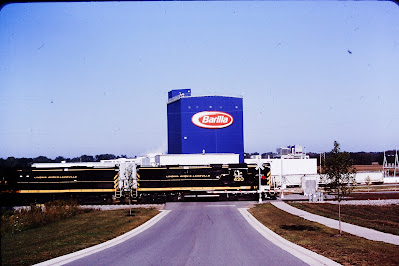 The image above from my collection was taken September 02, 2009. I like it most because it shows LA&L #420, my favorite engine. I used to see it and #425 pairded up for their road trains while attending nearby RIT University, and I love high-nose engines. Atlas even made a model of it, but it is tough to find nowadays.

Posted by DandHColonieMain at 4:43 AM