The D&H rostered a fleet of Alco RS3 engines, and four lasted into 1984 when I model. I wrote about them previously here. Engine #4075 has always been my favorite of the class, perhaps because of its striking blue scheme. What was once applied as a cost-cutting measure (the Altschul "blue dip") featured my favorite color and reminded me of Conrail... a childhood favorite railroad.

Engine #4075 was one of the first engines to receive the all blue scheme in 1977. However, it was a bit too plain and it also faded badly. Look at the picture below dated October 08, 1978. While it had probably been only a year since it was painted, the blue has faded badly, the sides are covered in black oil and smoke residue, and the yellow handrails are grubby. Also note the whitened appearance of the once-yellow lettering. 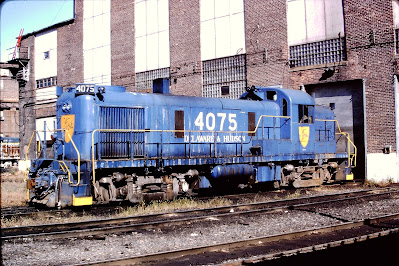 The D&H decided to modify their paint scheme a bit and introduced the "yellow nose" revision in late 1977. This included adding yellow side sills, yellow noses (including the high-nose RS11 #5002), and black underbody. Compared to the shot above, the picture below taken November 26, 1978 looks like a completely different engine! This is the #4075 that I love. Note that despite being only six weeks between pictures there are already black oil and dirt streaks along the yellow side sills of an otherwise pristine engine! You can dress up an Alco, but you still can't take it out... 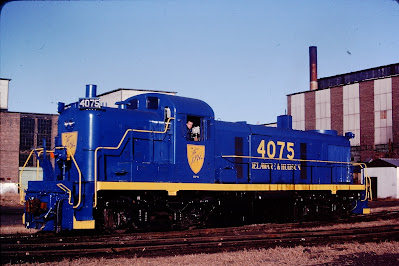 Models of this engine area available in HO scale, but the finally-released Bowser HO scale RS3 engine doesn't feature the blue dip. That is sad, because I think most D&H fans instantly recognize this specific engine. I lobbied Lee English of Bowser several years ago for it, and their current model actually has the details on it which trace back to its B&M heritage. So, perhaps in the future one will be available.

Finally, I would be remiss without referencing Hal Reiser's excellent book: Bridge Line Blues. It contains an excellent section on D&H motive power that details specific engine paint schemes during the time frame I am interested in.

Posted by DandHColonieMain at 4:07 AM