Growing up in the 1980s, railfanning in the Rochester area meant generally three things: (a) Conrail, (b) unit coal trains, and (c) Trailer on FlatCar (TOFC) trains. I really like the looks of TOFC equipment, even though I am not the most knowledgeable on the subject. However, along the way I have done a bit of internet research on various forums as well as picked up several books that have helped a lot.

As time went on, TOFC has faded away and Containers on FlatCars (COFC) have become the primary method of transporting goods. It is a shame, as I really don't find container trains all that interesting. Even though the containers are multiple colors and the equipment can be diverse, it just looks "the same" to me. I bet this is how railfans in the Pennsy era felt when train after train of oxide red/brown cars rolled by. 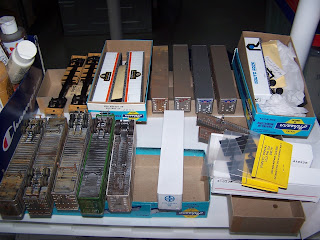 Before we moved to our new house I collected a bunch of HO scale kits, mostly boxcars and covered hoppers. However, deep down I really wanted to buy some TOFC stuff. At the time I wasn't really sure what to get, but I was cognizant of the fact that I might mistakenly buy stuff that was too modern for my 1984-era layout. Therefore, I set a couple of ground rules: (a) no 53 foot trailers, (b) no flatcars that were designed for TOFC and COFC, (c) no three or five-coupled Impack sets, and (d) no flatcars with stenciling dates after my May 1984 date. As it turns out, I did purchase one flatcar stenciled July 1984 but I doubt anyone will notice!


Things I did focus on were 40' and 48' trailers, early yellow TTX flatcars, and Front Runners. I also only wanted kits, because I like to build them. My layout will have 24" radius curves but I knew I wouldn't be building the kits to take curves that sharp. I was building them for the fun of it. They may or may not run on my layout, but I could stage them for pictures and also run them at other people's layouts. Also, I was going to weigh them per the NMRA recommendations, including adding some in the flatcars themselves and more in the trailers. And, the trailers were going to be permanently attached to the flatcars so I had to make the joints secure and not rely on the pins and hitches alone to do so. Finally, everything was going to get weathered. 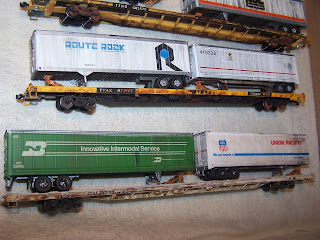 I purchased several kits from different manufacturers, including Walthers, Athearn, and Accurail. Some modeled 85 foot cars, some modeled 89 foot cars, and some were not based on a real car at all. However, it only mattered to me when it came time to mount trailers. Obviously, you cannot fit two 45' trailers on a 85 car. The people at Accurail were helpful in advising me of their models that fit my era. Their kits were also very well done, though the instructions were sometimes vague when showing exactly where the hitches should be attached to the car decks for various trailer arrangements.

While the different makes of cars had various coupler swing arrangements, the Athearn ones were really strange. A-line sells upgrade metal bolster and underframe kits for these, but I didn't want to spend $22+ on a car I only paid $10 for. So, for all my cars I body mounted the couplers after building styrene pads and tapping them for 2-56 screws. The screws stick up a little through the top of the flatcar but I hid it pretty well with paint. I would rather have solidly-attached couplers even if it means the bump on the deck. The trucks all had metal wheels installed for added weight. 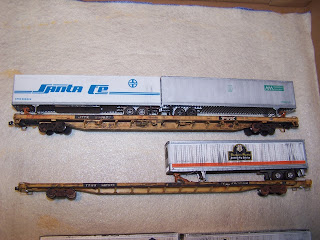 The hitches all came as plastic moldings, and while some were nice (Accurail, Walthers) some were terrible (Athearn). Of course, the Athearn kits were older blue box ones and many modelers had written them off entirely as unrealistic so I knew going in that they wouldn't be perfect. I wanted to model at least one flatcar with only one trailer on it (half-empty), and at least one trailer with back-to-back trailers, and at least one with trailers "elephant style." The plastic hitches built up nice but I broke one trying to mount a trailer so I gave up on them. Instead, I used metal Details West trailer hitch castings. I selected ones that I thought looked like the plastic ones in the kits, but when it was unclear I got the larger, stronger ones. They assembled up nicely. For me, they were worth the couple extra dollars each.

Whenever I could, I hid metal shot in the underframe in areas that wouldn't be visible or foul the turning of the trucks. It wasn't easy, but the Accurail cars had a hollow centersill that I drilled open and then used a tiny funnel to fill. I weathered the cars pretty heavily, though I focused more on dirt and grime on the deck itself where the trailers would normally go. 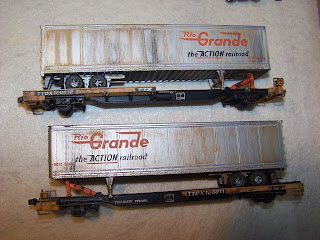 I looked on Ebay and bought a bunch of trailer kits. Some turned out to be too early for my era, and others were "out of region" such that I ended up with a bunch of Union Pacific trailers and didn't use them all. I noticed that pictures of Front Runners frequently had Southern Pacific trailers loaded on them so I bought some specifically. A member of a train club I was in years ago had some of these and they just didn't track well, mostly because they are light. I was especially careful to put weight as low as possible in the trailer. Even still, they will likely always be at the end of the train (which is I think how the prototype railroads handled them too.

For each of the trailers, I painted the wheels, hubcaps, silver trim, mud flaps, and tail lights. I also added license plates sold by Howards Hobby, which I think I found by just doing a simple internet search. I bought A-line vinyl mud flaps but the superglue kept flaking off the vinyl and they fell off, so I replaced them with cardstock painted black.  I don't know much about real trucks so I didn't base them off of specific prototypes. I modified them until they looked "right" to me. The silver trim was sometimes spray painted (for large areas like the roof and chassis) or brush painted (for door hinge trim). I skipped it if it would be so difficult that the final result would look bad. Better to not paint it than paint it horribly. 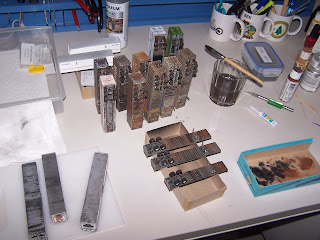 They were weathered too, usually with black sprays from cans along the roof to represent soot from truck exhausts, and dirt along the sides. I also read online that trailers didn't really get rusty because that made them unsafe for travel over the road, so I avoided rusting them too much. To add weight to the trailers (and thus to the finished flatcars), I built boxes of styrene and filled them with metal shot and glue for weight, with the boxes long and not very tall so the weight was down low.

To attach the trailers to the cars, I followed the good advice from the people at Accurail and used Loctite Super Glue gel. Once I learned how the bottle worked, I discovered this stuff is amazing! I glued the hitch areas as well as under the trailers. To give the tires a nice flat surface for gluing (and also to look like they were being compressed from the weight of the trailer) I sanded them flat. This gave me plenty of glue surface. 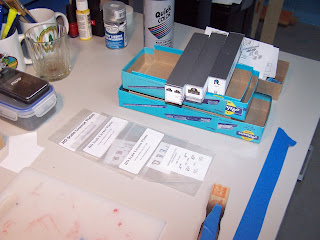 I avoided certain brands of trailers, especially ConCor, because they looked too unrealistic. I really liked the Athearn and Walthers trailers, and hope to buy some more down the road (get it?). Notably missing are Conrail "Trailway" trailers, which were all over the northeast. In fact, there is one still visible just east of Fort Plain, NY, from the I-90 Thruway (MP 197.4). The Conrail lettering has faded badly over the past 10 years but it is still there. Athearn made them but I never seem to win them on Ebay... no doubt my low bids are responsible. The Boston & Maine also had trailers with their markings in the early 1980s.
Posted by DandHColonieMain at 9:14 AM