Here is a picture from December 08, 2004 that I snapped of a northbound train entering the Colonie Yard limits. This road crossing marks the southern end of what used to be the large yard. I was just arriving for an afternoon of railfanning and didn't have my camera handy so this was the best I could do. Most of the other blurry pictures were deleted, but the unusual load on this flat car caused me to keep it. 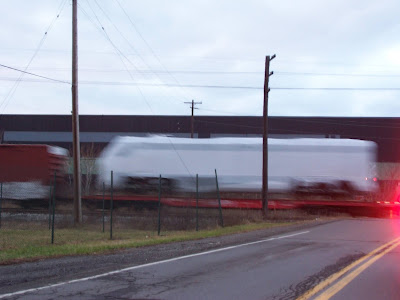 The engine looks like a General Electric "Genesis" engine (perhaps a P40 or P42)? I wonder if it was being sent to the Port of Albany for export to another country. Or maybe it was heading to NYC for the Metro North Railroad? About two years ago I saw a full passenger (or subway) car being transported on the interstate highway near my home so trains obviously do travel on wheels that are made of rubber.

It would make for an interesting model.

Posted by DandHColonieMain at 7:59 AM